It’s On Us Rally: Committing to consent 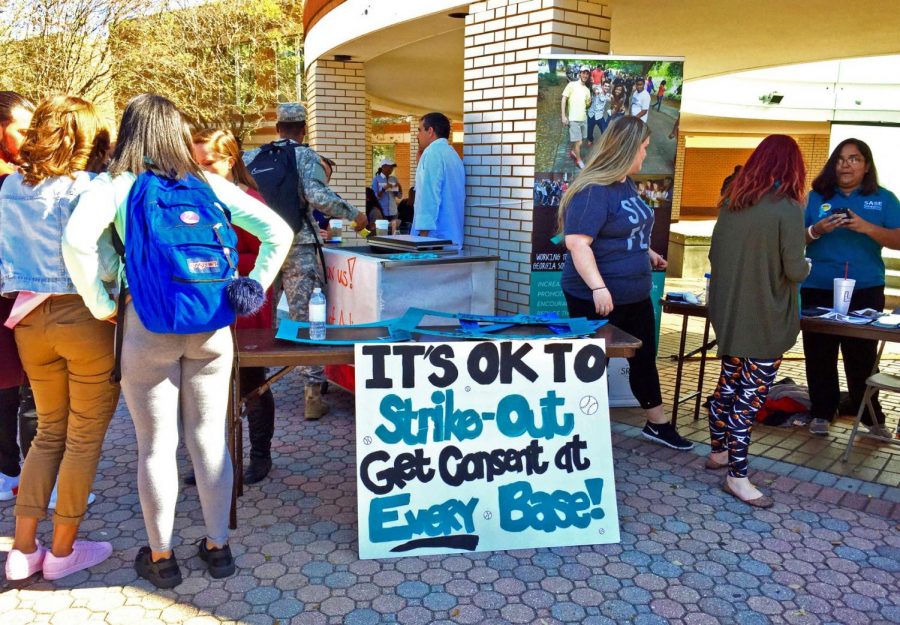 Sexual assault, like other unsafe situations, can be avoided by taking certain precautions. One of the ways students can negotiate healthy sexual relationships is by establishing consent, permission between willing parties to have sex.

The It’s On Us Rally was held last Tuesday at the Rotunda to provide consent education to Georgia Southern students. It’s On Us is a national organization devoted to stopping sexual assault and spreading the importance of consent.

During the rally, the organizations came together and asked people to pledge to end sexual assault on campus by asking for consent in their daily lives. The different organizations and community resources were gave out information and allowed students to be involved in activities to get them thinking about sexual assault.

The rally’s theme was “It’s okay to strike out: Get consent at every base.” Gemma Skuraton, the health promotion coordinator from Health Services, feels a big reason students do not speak and get consent is because they are afraid of striking out, or getting the answer no, and they feel it’s uncomfortable.

“It’s definitely the person’s choice to come out. You don’t want to make someone report if they don’t want to. It’s not so much a push, but there are many resources for those who need them,” Baker said.

Another part of the rally was a petition put on by NOW and organized by RAINN, the Rape, Abuse, and Incest National Network. The petition was a letter to the next president, asking them to make ending sexual violence a priority during their term and promising that citizens will do the same.

Rebecca Frost, president of NOW and senior writing and linguistics major, highlighted why consent is so important.

“It confirms that your partner is enjoying themselves, that they’re comfortable with doing what they’re doing. People are young and experimenting with each other and with drinking, and lines can get blurred really easily,” Frost said. “You may do things because you think you can or are expected to or you may not realize that your partner is uncomfortable, so it’s important to have healthy dialogue with each other when you’re having that kind of relationship.”

The SRSAC was there with an informational jeopardy game that students could play, with facts like how often sexual assault occurs and why it is important.

Megan Onofry, an assistant for victim services with SRSAC, brought up bystander intervention and how the community as a whole is responsible.

Onofry said, “The responsibility is on the community as a whole. That’s why bystander intervention is so important. [It is] stepping up when you see something harmful happening, even if it’s not to you, whether it’s at a party or on campus.”