We asked, you responded – Part Three 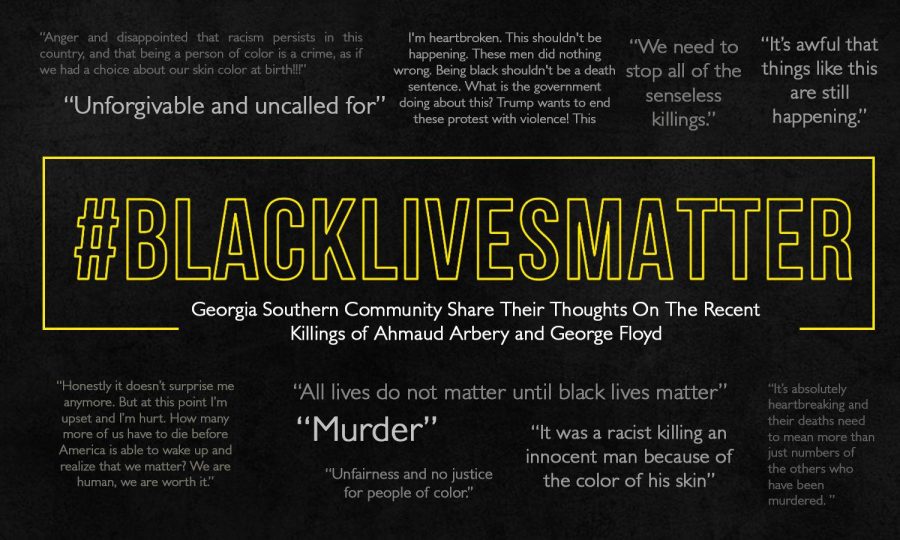 Since then, we have received more than 100 responses from students, faculty, staff and university leadership.

This is the third installment in a series of articles that will include the comments we receive. All quotes listed below are copied directly from the response forms. Each part will include 20 responses.

“They were unfair and deserve justice. Not all white people are the same as the ones involved in these crimes. I as a white american citizen do not agree with the situation but do not want to participate in the riots and events taking place. I fear being in my own home town outside of Atlanta. Just because I do not want to participate in violence and put my life on the line does not mean I am against you.”

“They are senseless murders at the hands of racist who should be held accountable for their actions because without justice there will not be peace. It is so incredibly sad the fear that black Americans have to live with just because of the color of their skin. All lives do not matter until black lives matter.”

“It’s evil. Tragic and heinous and needs to be publicly grieved at the loss of life, and the very sad reality and toleration of racism. I have been disappointed in GSU’s public silence in the face of such blatant violence to appease political ties that invalidate the struggle of roughly have of the student representation, and so many of our beloved coworkers and faculties experience. As a person of Christian Faith, I also feel complicit in the church’s avoidance of naming these things as evil and grieving the loss of beloved sons and daughters, companions, friends and brothers and sisters.”

“The tragic deaths of Ahmad Arbery and George Floyd serve as an example of not only the overwhelming presence of racism STILL in America, but also to the extreme extent in which actions may extend from such hateful views. To be black in America is to always be on the side of injustice. It means to be fearful for your brother’s, son’s, dad’s, mother’s, sister’s and your own life daily. When we say our Black lives matter while standing in the face of oppression and unequal treatment in attempt to bring awareness, we are shut down with “all lives matter,” negating the message and struggles of the minority. When we peacefully protest we are fired and “disrespectful” to our nation, yet when we turn to violence to counteract violence WE become the thugs. Being black in America means we ALWAYS be seen as a threat before being seen as a human, and unfortunately Ahmaud and George have I rightfully lost their life due to the black experience.”

“I think it’s tragic, but has become the new norm in the US. Something needs to be done, anything, to help work towards the elimination of systematic racism in the US. I completely understand why everyone is out protesting, like the repeated racial incidents on campus, people are sick and tired of this happening. It’s costing lives. It’s sad to say, but it has become normal; which is absolutely awful and horrible. These kind of acts date back throughout our history when people had “lynching parties,” finding black people to hang and then have a picnic with the family beneath the tree. It’s 2020, but we are stuck in the 1800’s, if not earlier. Obviously these deaths need to stop, young black men and women are losing their lives. Things need to change, and we need to move towards change. These killings keep happening, how do we prevent them? How do we change the mindsets of those in power? Why does it take months for the guilty party to be charged and convicted with cold hard evidence? Why do people act like complete and utter assholes to those who have a different skin color?”

“I believe that Mr Ahmaud and Mr Floyd should not have been treated the way they were, they were never even questioned properly, if it was a white person that was just suspected of fraud or trespassing, best believe he/she would not be treated the way Mr Ahmaud and Mr Floyd were. I don’t know how the individuals that killed these men can go on with their lives knowing that they killed men who had people depending on them, who had a bright future ahead of them just like themselves or their children. So what if Mr Floyd was trespassing, maybe he just admired the structure and hoped to build something like that someday. It is indeed very sad that this is not the first time such a thing is happening in the US, so many black people have lost their lives in so many ways and the truth is that their ancestors never begged to leave their countries, they were just simple people living simple lives, some even princes or princesses, but they were brought here to face humiliation and countless suffering till this very modern age. There should be no such thing as racial supremacy as all men and women are equal in the eyes of GOD no matter the color of their skin, all lives matter.”

“My thoughts are that this country has long oppressed and abused black people through political, economical, and social means. The very foundation of our nation was built in order to ensure the well being and prosperity of white men. Combating racism, unifying as a people, and challenging the system in which we live is long overdue. An extreme misfortune is an understatement regarding the fact that it has taken so many murders of innocent black lives in order for our country to begin to wake up to the corruption and question “are we really doing things right?””

“Tragedy plain and simple. 2 innocent men lost their lives because of the color of their skin.”

“Absolutely disgusting! All of the killers, from the ex police officer and his son, to the four police officers involved with George Floyd, should be charged with first degree murder and serve 25 years to life”

“It’s awful that things like this are still happening.”

“I think it is ridiculous that someone can murder someone on camera and not be arrested for it because they are a white cop. This just shows how messed up our system and country is.”

“Both were completely unnecessary. George Floyd they called the paramedics 7 minutes after crushing his neck. They knew they were killing him and that is why they called the paramedics but the fact they waited makes it even worse. Just imagine that being your mother, daughter, son, spouse, anyone you care about. Also the riot in Atlanta, it was calm at first but then got out of hand but I would like to point out just what I saw on the camera. Yes, it was mainly black people there but whenever they zoomed it was just as many other races destroying those cars as well. What they did was a little superfluous but I do not want to say it wrong because we all have our different experiences. If you knew your family, friends, or just anyone like you were up next wouldn’t you try your best to fight for protection. Even when there are some government officials, police, and citizens that do not see you as equal when there is literally no differences except the color of your skin. I know that every police officer or white is NOT “bad” but it is hard to know who is supporting you. Like if you were getting bullied and your friend did not say anything because they were scared that they would get beat up too. See you would feel betrayed because they did not support you when you needed them but trusted them as a friend. It is hard to tell who is your alliance so out of fear to protect yourselves and the people you love, you have to act with caution in any scenario. I just wish we lived in a world where everyone was seen as equal so we can all live with a smile but people are unhappy that they are different colors than their own. Have a nice day and be blessed!”

“Feeling frustrated, sad, disappointed, disgusted, afraid and I have a lack of confidence, that what is displayed all over the country and especially up the road from my home, could be in my immediate community. We are socially distant but we are also emotionally distant in our response to this atrocity. My thoughts are we as an institution should have a strong voice in this matter. A voice we can ALL agree with. A voice that is not passive in response, but definitive in its rebuke of injustice. Silence is agreement.”

“As a black woman in America these deaths have deeply troubled me.These are the things I’ve always feared happening to my close friends and relatives and to see it happen is so scary. To think that any day a tragic event like this could happen to someone close to me is terrifying but has always been my reality.Whats even worse is that these awful things don’t just happen to our black men but women as well only we get less media coverage and less recognition and as a woman of color this fact troubles me too but once again sadly is my reality.This is the sad truth, most people like to say that slavery was so long ago and things have gotten better now but fail to say just how little time has passed since segregation ended. My grandfather, who is still alive, was a grown man by the time segregation was over. Change doesn’t happen over night but people have to want change and unfortunately there are a lot of people who don’t want change and claim to not see the faults that our country still has to workout. I grew up having to hear “you will always have two strikes against you in this world, you are black and you are a woman” and I hope and pray one day we live in a world were that saying can die because the problem has been fixed.”

“Police departments are very good at employing people who don’t have any kind of regard for the lives of people of color. And the presidents inflammatory statements only make this kind of bigotry seem acceptable”

“I’m heartbroken. This shouldn’t be happening. These men did nothing wrong. Being black shouldn’t be a death sentence. What is the government doing about this? Trump wants to end these protest with violence! This problem needs to be fixed now or we will have a very complicated future.”