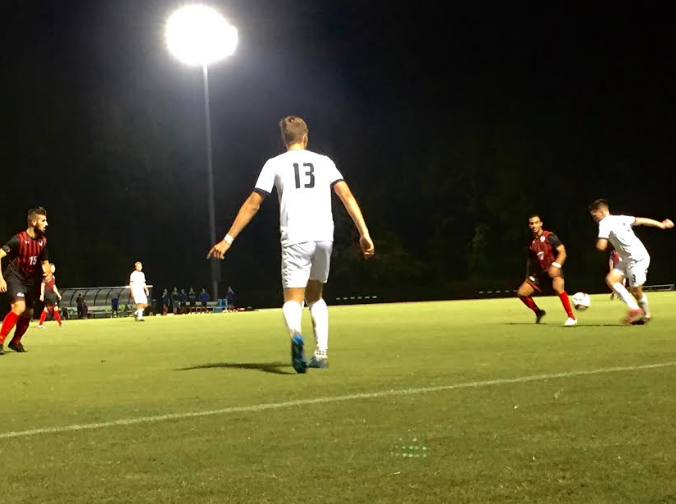 The Georgia Southern men’s soccer team played Gardner-Webb Wednesday night in a back and forth battle. What went from a slow start with a 2-1 deficit at half, finished with an exciting 3-2 win for the Eagles on a last second goal by freshman midfielder, Josh Bronstorph.

“The team effort was great in the second half, and Hunter our captain came into the locker room at halftime and said that we could win any game as long as we play as well as we can,” Bronstroph said.

The first career goal for Josh Bronstroph could not have come at a better time, giving the Eagles their second win in a row and shifting the momentum for the rest of the season.

“Coach said it, you win on Wednesday nights and that’s what is going to get us where we want to be late in the season,” Bronstroph commented.

Shifting the momentum was a second half goal by junior forward, Nick Wells that tied the game at 2 apiece, giving the Eagles the life to step up and finish the game.

“We are just going to build off of the win and feed off the momentum and keep getting better every single week,” Wells said. “We treat every game the same, whether it’s a conference game or a non-conference game on a Wednesday, these are the games that matter just as much, because it helps boost team morale.”

Even Coach John Murphy could tell that the team’s play changed in the second half. “I thought that in the second half we played with a little more of an appetite and energy, both of which I think are important, and we scored a great equalizer goal with Nick Wells,” Coach said.

The Eagles will be able to use this win to climb the ladder even higher with conference play coming into full swing. Next up, the team travels to Conway, South Carolina to face off in a pivotal Sun Belt match with Coastal Carolina on Saturday. A win against the Chanticleers will propel the Eagles to the top of the conference standings