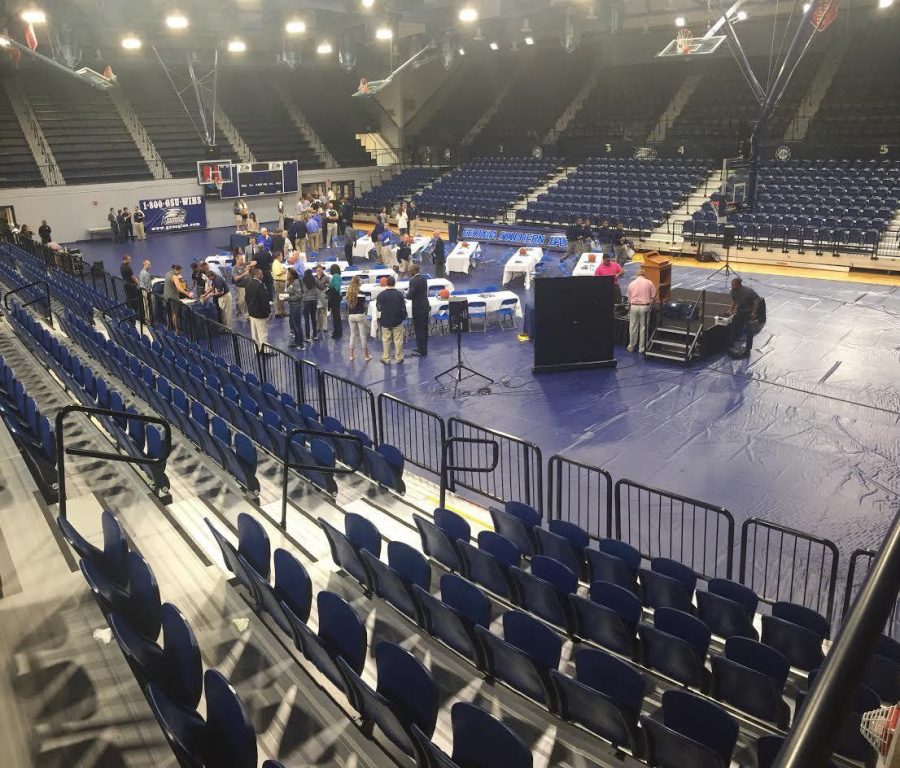 Coaches Kip Drown and Mark Byington spoke to the audience about their upcoming seasons and answered any questions from the crowd.

Women’s basketball coach Drown spoke on the success he feels his team will have this year, as they return 10 players from last year’s team. Five of those players have starting experience and he is also excited about the five freshman they have coming in.

“All five of these girls will play sometime this season. Some might be ready earlier than others, but they will all play for for us at some point,” Drown said.

The notable returning players for the Eagles are seniors Angel McGowan and Patrice Butler, who received Preseason All-Sun Belt Conference First Team and Third Team honors respectively. After going 7-22 last season, their motto throughout the off-season and this season has been “Why Not Us?”

The Eagles believe they lost a lot of close games last season, and if they’re able to win those type of games, they have a chance to go far in their season.

“We’ve got to believe we deserve to win. I think the confidence that comes with championship teams is they believe they put in the time and effort to deserve to win,” Drown said.

The team plans on taking it day by day and getting better athletically. Drown said he has recruited a class that has good shooters, and he thinks this could be a season worth remembering.

Men’s basketball coach Byington spoke on their upcoming season and how he expects to compete for a championship coming off a 14-17 season with the nation’s youngest team.

With the Eagles returning all five starters from last season, they are prepared to compete for the Sun Belt Championship this season and their first NCAA tournament berth.

Notable players returning for the Eagles are sophomore Tookie Brown and junior Mike Hughes, two players that were named to the All-Sun Belt Conference First Team and Third Team respectively last year. Brown and Hughes were also named to the Preseason First and Second Sun Belt Conference Team by the 12 coaches of the Sun Belt. Brown, Hughes, and Devonte Boykins were named captains of the team.

Byington said he wants to “keep making this place special” in his speech to the audience. He is 23-6 at home in the last two seasons at GS, and he wants to keep that home court advantage.

“I want [teams] to be more worried about preparing for us than themselves,” Byington said.

He plans on having a complicated defensive scheme that will confuse opponents, and running the offense based on spacing to open up players for open shoots.