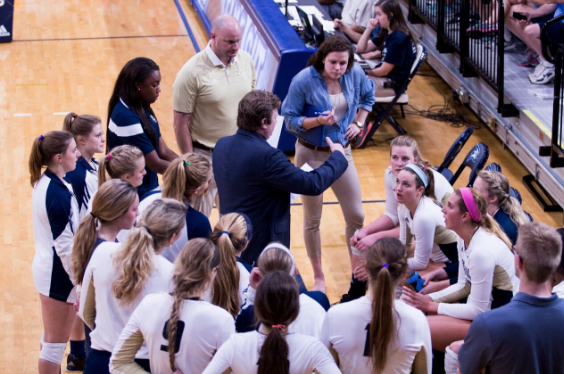 Playing for the first time since Mondays win against Savannah State, the GS Woman’s Volleyball team took the court at Hanner Fieldhouse this weekend looking to turn their floundering season around.

The energy in Hanner Fieldhouse was quelled after the Red Wolves made short work of the Eagles in the first set, leading by as many as 11, winning 25-14. Arkansas State carried their momentum into the second set jumping out to a 6-1 lead before a timeout, a rally, and a fierce spike by GS junior Cathrine Murray tied things up. The set saw several lead changes until the Red Wolves staved off the Eagles with a 25-22 win. Even though GS gained an early lead in the third, Arkansas State battled back winning the set 25-23 and the match 3-0.

Not to be discouraged, nearly 200 fans came out to support their Eagles in Saturday’s barn burner against the Arkansas Little Rock Trojans. The first set saw both teams vying for a small lead until the Trojans pulled away and took the set 25-17. Whenever the Trojans made a run in the second set, the Eagles remained steadfast, ending with a final exchange capped off by a Catherine Murray kill for the Eagle win 26-24. The blocking duo of sophomore Lauren Reichard and senior Katie Bange combined with the set-winning kill by junior Anna Wenger earned the Eagles the third set win 25-23. Unfortunately, this was the high point for the Eagles as the Red wolves came back with a 25-23 win in the fourth before taking the fifth 19-17 and the match 3-2.

“We had opportunities that you have to take advantage of so we’re disappointed in that. They had seven blocks in the fifth set alone, and we hit negative so when you have match points not playing that well, you have to take it and run with it. We didn’t do that tonight,” GS head coach Dustin Woods said.

Georgia Southern has now dropped five straight Sun Belt matches, falling to 12-14 overall and 4-6 in conference play. Their next game will be against Coastal Carolina at Hanner Fieldhouse on Wednesday, Nov. 2 at 6 p.m.