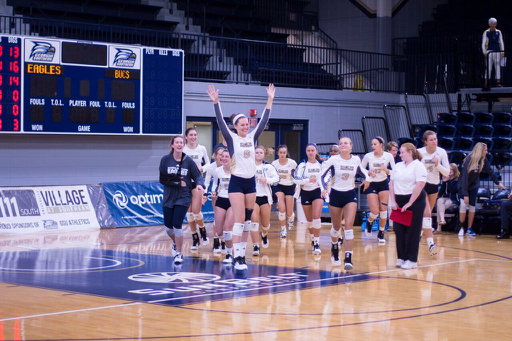 After a 12-day break due to Hurricane Matthew in Statesboro, the Georgia Southern women’s volleyball team 11-10 overall (4-2 Sun Belt) hit the road to play Troy and South Alabama last weekend.

The Eagles have experienced a constant fluctuation of highs and lows this season, but one constant has been their spectacular play at home.

“Lauren Reichard put the entire team on her shoulders tonight. She was amazing. She made big plays in key moments again and again. She has those intangible things that you can’t coach. She’s a gamer,” Dustin Wood, head coach, said

The great play at home could be a key component as the Eagles look towards wrapping up their season as seven of their final 11 games are scheduled to be played in Hanner. The continued home success throughout this stretch could serve as a great boost and help catapult the Eagles to a deep run in the Sun Belt Conference tournament.

The Eagles return to Hanner this weekend as they face UT Arlington, 10-12 overall (4-3 Sun Belt), Friday night and Texas State, 13-9 overall (6-1 Sun Belt), Saturday night. Both games begin at 6:30 p.m. and will be vital to winning as the Eagles look to remain in the top two of the East Division.