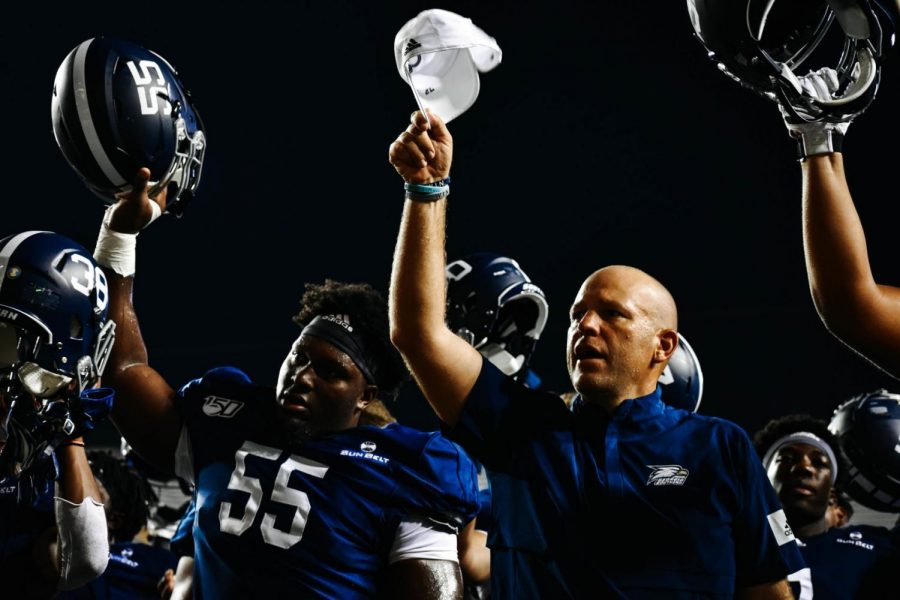 Head Coach Chad Lunsford took the podium to discuss the near-upset over Minnesota.

STATESBORO — Georgia Southern coaches marched and peacefully protested along with players, students, and the Statesboro community on Saturday, June 6.

The march went from the Bulloch County Courthouse to the Statesboro Police Department. It was part of a protest in response to social injustice around the United States.

“I joined the protests here in Statesboro because I want my voice and my stance to be known and heard.  I felt empowered as I walked the streets of Statesboro chanting with people who look like me…but also those who don’t.” said Howard in an email.

Howard has been outspoken because she wants it to be known where she stands on the issue of racism and supports the efforts of students who stand for what they believe in.

“I am a proud black woman and I am often concerned about the safety of my family due to the complexion of their skin. What happened to George Floyd was wrong, and incidents such as this have become far too commonplace. We must recognize a problem exists and address it” she said.

TaJuan Wilson, associate vice president of inclusive excellence and chief diversity officer, joined a zoom meeting with Howard and the women’s basketball team where they discussed events leading to the nationwide protest.

“In times like these we must encourage difficult conversations where various perspectives can be shared without judgement, and education can follow to promote deeper understanding.” said Howard.

Donald commented on his motivations for joining the protest.

“One to be an African American male with everything that’s going on, and then have this platform as a football coach, where the majority of guys on this team are African American, I thought that it was something that, you know, I had to do for them,” said Donald.

Donald said that when thinking about cases such as Ahmaud Arbery, Oscar Grant, Tamir Rice, George Floyd, and Sandra Bland he knows it could have just as easily been one of his own players in that situation.

“I think by me going out there it kind of tells my players I got y’alls backs,” said Donald. “I told our players and Coach Lunsford shared the same message to them that they have a platform and they should use their platform.”

Donald notes that these social injustice issues are not new to the team and thinks back to the Shai Werts incident where the quarterback was arrested for cocaine possession that was later revealed to be bird poop. The link to that story can be found here.

“My motivation is to do right and I want to do right by our guys on our football team,” said Lunsford. “One, I wanted to show support but two, I wanted to continue to learn and being able to go to that protest and listen and be a part of it.”

Lunsford explains that part of his program is helping his players grow to be men and that means educating them through hard work and values.

The head football coach explains that in an effort to do right he started with having position coaches reach out to players to open up a dialogue.

“Our guys expressed concerns, they expressed things, you know and I told them, I said, ‘I’m not gonna take anything personal. Your opinion matters and if it is something that I’m doing that you don’t feel is right, or you don’t feel good about, voice it.’”

When asked if he’s received any negative blowback from his stance Lunsford commented “Some, you know, I’ve had people question, and I don’t know if I take it as negative. I guess you could say I take it as possibly people opposing my stance.”

“I still believe that love is the answer,” said Lunsford.