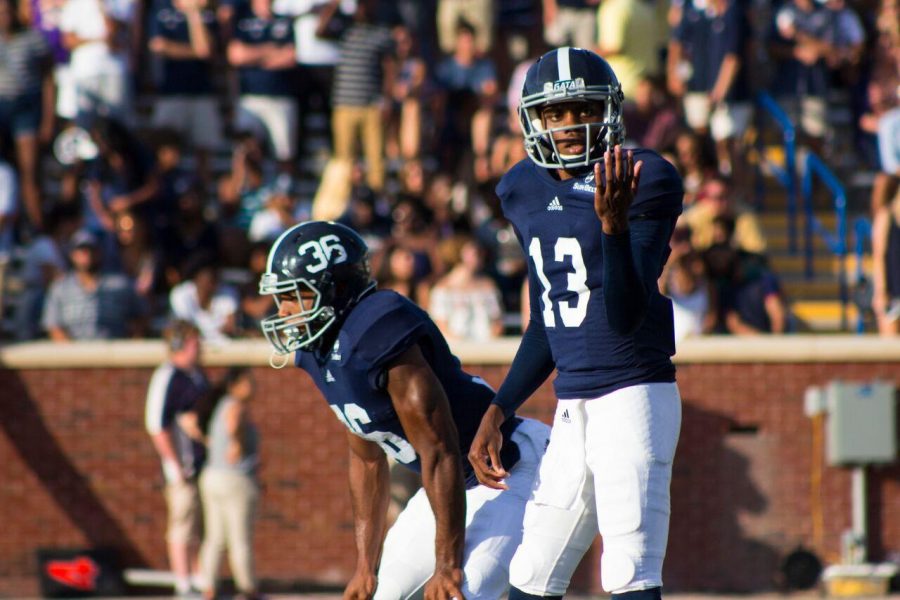 When Georgia Southern plays Arkansas State on Wednesday, it will have been 11 days since the Eagles last suited up for a game. GS is looking to bounce back from their crushing loss to Western Michigan. The game will be nationally televised on ESPN 2 at 8 pm.

In the game against WMU, Southern could not establish the running game on offense and defensively they could not come up with the necessary stop to win. They will have the chance to correct everything that went wrong in the Sun Belt conference matchup against ASU. The Red Wolves are 0-4 and have yet to play a conference game.

Favian Upshaw leads the Eagles in both passing and rushing. Upshaw averages 63.5 yards on the ground per game and another 102 yards in the air. He has played well through the first four games of the season, but after getting hurt in the first half against WMU it is interesting to see how he bounces back. Kevin Ellison injured his elbow in the same game and had to be taken out in the fourth quarter. The long separation between games has given the Eagles a chance to get healthy again.

The Eagles will need to re-assert themselves running the football. Wesley Fields leads all of the Running backs in rushing yards. Fields averages six yards per carry and has three touchdowns so far this season. Matt Breida has had an underwhelming season compared to his brilliant performance last season. Breida is averaging 59 yards per game and has only one touchdown. The decrease in Breida’s numbers come from the huge productivity from Fields this season.

In the middle of a four-game road stretch, GS needs to get back to the defensive form they showed in the first three games of the season. ASU is another team that can put the ball in the air effectively. ASU Quarterback Justice Hansen is coming off of a game where he threw for over 400 yards and three touchdowns.

The secondary for the Eagles will be challenged once again. This secondary is not a particularly experienced group, but they are growing every game.

“They’re gonna be good. They’re probably the best group we’re gonna have here down the road. I just see a bunch of guys who came into a situation where everybody is gone and I’m the only one coming back. They’re taking it and they’re running with it,” Senior Cornerback, Darius Jones Jr. said.

This game against the Red Wolves will be the first time these two teams have met since their meeting in the NCAA I-AA national championship game in 1986. The Eagles are aiming to be 3-0 in the Sun Belt after Wednesday night.