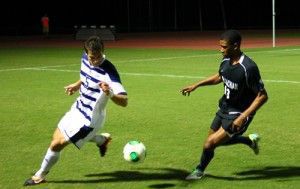 The men’s soccer team will be debuting in their first home game of the season against James Madison University this Friday. They intend to bounce back from their last game, losing to Jacksonville 3-0 on the road.

Head Coach John Murphy and his team need to secure a solid win for their first home game of the season before they head into a tough road slate for the near future as a momentum boast. They play four straight away games against the University of South Carolina, Mercer, Duke and North Florida.

The Eagles should not overlook the Dukes of JMU heading into Friday nights matchup as they arrive at Eagle Field winless this season. The Dukes lost three out of four games by one goal and lost their last game at home to Penn State.

Duke’s team leader in goals is redshirt senior, Conner Coward, who has one goal and one assist for the season. His stats may not show it, but he has been a crucial part of their team leading them with five goals and scoring the game-winning goal to win the CAA championship in 2014.

The two players created opportunities in their last game, with 20 shots for the night, but could not find a way to get the ball in the back of the net. That has to be a key turnaround for the Eagles if they want to beat JMU.

The Eagles play at Eagle Field Friday, Sept 9 at 4 p.m.