State of the University addresses concerns 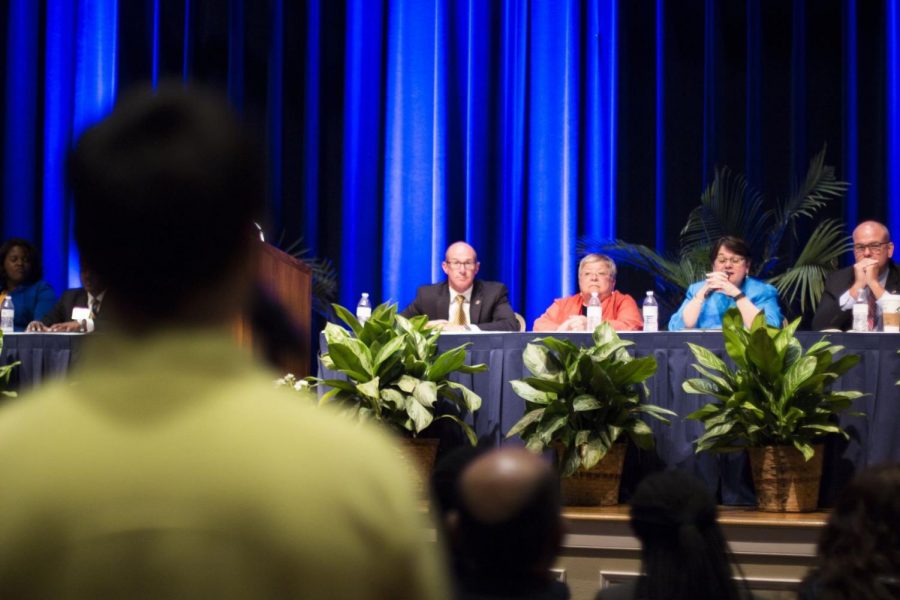 Financial aid, new academic programs and racial issues were the main focus of the annual State of the University held Wednesday night, hosted by the Student Government Association.

For most, if not all students at GS, financial aid has become a main concern across the GS campus.

Vice President Teresa Thompson explains to students that the financial aid issues are an on-going issue, but the goal is to make the process easier for not just students but parents.

“So it has been a little bit difficult this year but we are trying to help as much as we can by extending deadlines, such as when cancellation will begin for the university,” Thompson said. “We have also had extra people coming in that will review this for next year. Next year will be a little different because the regulations will be in effect when you first apply.”

Provost and Vice President of Academic Affairs Jean Bartels gave a short, but informative insight on future new bachelor and master degrees that have will be added to Georgia Southern as well as opening of brand new buildings.

“There have been a few academic programs that have been approved. Bachelor of Manufacturing of Engineering that was approved earlier this year,” Bartels said. “We also have a few Masters Degrees and have added a health minor and new certificates.”

The question of racial issues on campus was brought to the forefront when College of Education Senator Bianca Yarde asked the question of how the university plans on addressing the ongoing issue within the GS campus and the Statesboro community.

“I guess I am going to address the elephant in the room, race,” Yarde said. “I have heard plenty of things from blacks and other minority students complaining about things going on outside of our classrooms regarding race issues like, ‘White Girl Wednesdays’ and ‘Trump Thursdays’.”

“We have worked with Mayor Moore quite a bit in addressing those issues,” Thompson said. “You also have to understand that we cannot control what businesses do. We can talk with them, as when we did last year and ask them to please not do these types of things. I do think we as people need to address that issue by not attending these events.”

Students at the SOTU were excited to become involved with the university.

Freshman nursing major Nandi Walton believes that the on-going issue of race on GS campus was brought to the audience’s attention.

“They did address the problem of race. The race and minority things is strange,” Walton said. “There seems to be a strain or gap between minorities here. So I am glad that they at least addressed that.”

Freshman economics major Kayla Duffie believes the SOTU is something every student should become involved in.

“I think that all students should attend meetings like this because, for me, it gave me the opportunity to see what is going on,” Duffie said. “I am able to learn about the different things happening and become more involved.”

For more information on upcoming SGA meetings, head on over to students.georgiasouthern.edu/sga.