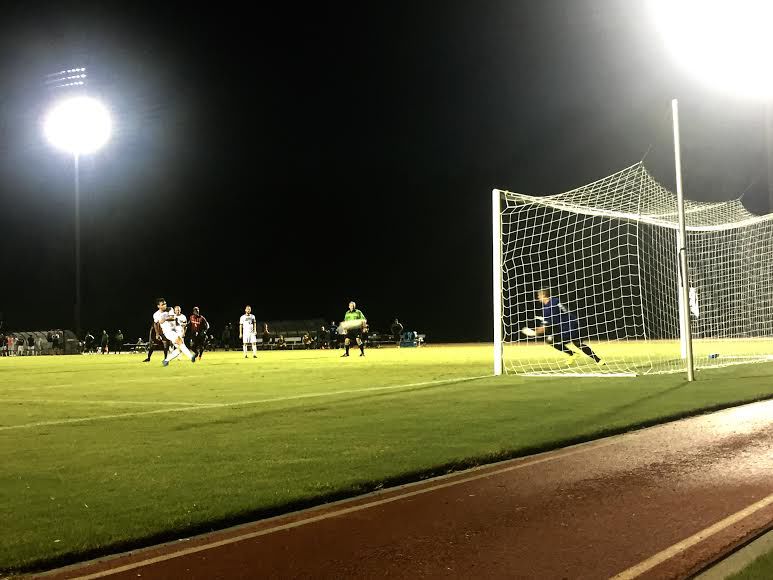 The Georgia Southern men’s soccer team played the Campbell Camels last night in a rough match. The result of the game was a defeat for the Eagles as the Camels sealed their win with goal number four in the last minute.

There were a total of 42 fouls called and 7 yellow cards given by the end of the mostly GSU dominated match.

Throughout the first half and through the second, the Eagles took control of the ball maintaining much of the possession. They had a total of twenty-one shots on goal, but were only able to sink two; one a penalty kick placed in the left corner of the net by junior striker, Adam Abdellaoui, and the other from the foot of Rasmus Juul, freshman defender, the equalizer.

“The second goal I felt was a really tough one for us, but we responded decently and got the goal right before the end of the half. That gave us some momentum that carried over into the second half and we were able to equalize and we felt like we then had a grip of the game. But the goals we gave away, especially at the end there, were too easy and successful teams just don’t do that,” John Murphy, head soccer coach, said.

Their efforts came up short as Campbell went on to win the game 4-2. The team plans on using the time before their next game to plan. GSU Eagles will look to rebound Saturday, October 8 when they travel to Atlanta to face off with rival, Georgia State.