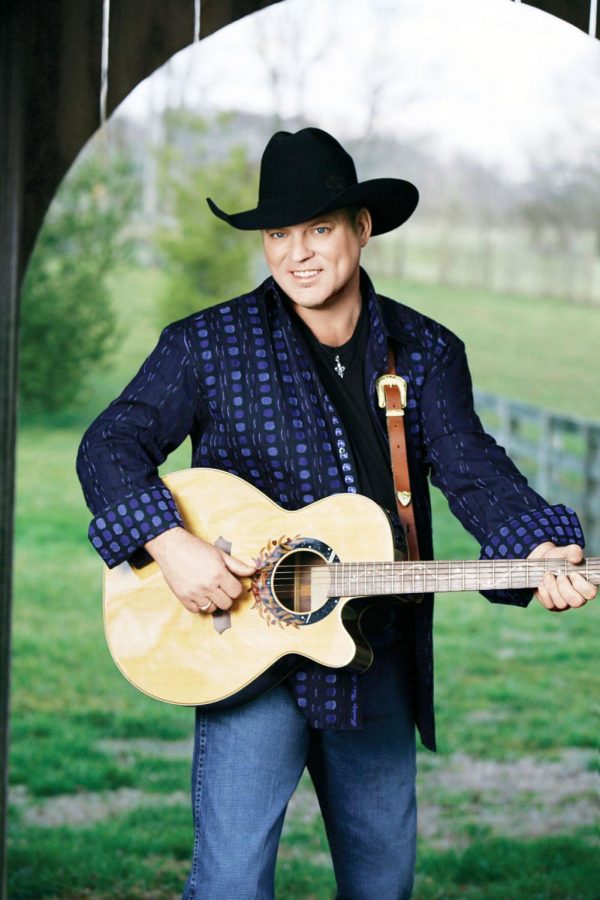 Award-winning country music artist John Michael Montgomery has come a long way since his days playing in Kentucky bars and sleeping in vehicles after playing concerts.

Montgomery, whose hits include songs like “I Swear,” “I Love the Way You Love Me” and “Letters from Home,” will be playing a concert at the Performing Arts Center on Sept. 8.

Montgomery talked about his musical legacy, reminiscing about his early days with “LIfe’s A Dance”.

“It’s passed by so fast. I’ve been touring, my twenty-fifth year of touring. Any singer’s aspirations, no matter what genre you’re in, you dream, while you’re listening to the radio, maybe being on there one day and getting a break and being able to cut a good song,” Montgomery said.

Montgomery and his brother, Eddie Montgomery, had to put themselves in a position to get lucky before they caught a break. Though they played weekends when John got out of high school, they wanted to play five nights a week in bars that had consistent live music.

A bar in Lexington, Kentucky, ended up hiring the Montgomery brothers. The duo was playing during the week at the bar. It was a slow night when a representative from Atlantic Records walked into the establishment.

The representative saw the duo and their potential, and later signed the Montgomery brothers to the label.

“If I was just playing weekends, he probably would’ve never seen me,” Montgomery said.

According to Montgomery, the whole process of being discovered as an artist can be pretty incredible.

“You don’t ever really think it’s going to happen to you. Then, when it does, it’s pretty unbelievable,” Montgomery said.

The legacy of family

Montgomery has a daughter, who is a college sophomore, and a son, who is a senior in high school. Both of his children enjoy singing and playing music.

In particular, his son loves music a lot and would love to go out and do what Montgomery does and sing for a living.

“They [Montgomery’s children] are both doing well in school and I told both of them ‘Look, there’s been plenty of successful singers out there that have a college education, too.’ I took the honky tonk route. And that’s a rough way to go,” Montgomery said.

Montgomery’s post-high school experience entailed spending night after night in bars playing music for people. He and his brother would play in smoke-filled bar rooms. For Montgomery, it was fun but also a less healthier way to play music.

“There were many nights I slept in my vehicle. I tell my son, if he commits himself to the education part of his life that I want him to, then I will certainly help him try to accomplish that goal, too,” Montgomery said.

Music for a cause

During his music career, Montgomery has advocated for Americans to support veterans and active duty service members. His support of the military goes back farther than his musical endeavors, though.

“When I was two, three, five years old, I had some uncles that were overseas in the Vietnam War. I spent a lot of time with my grandmother, and I remember her constantly worrying about her boys being able to make it back safely,” Montgomery said.

That is one of the reasons Montgomery connected with his song “Letters from Home” so much. That song pays tribute to the bond between military members and their families.

“The veterans give up so much and ask for nothing in return. This country, we owe it to them to let me know ‘Hey, you had our back. We’re going to have yours now.’ That’s the way I’ve always felt,” Montgomery said.

Montgomery plans on releasing a “Greatest Hits” album next year since 2017 marks the twenty-fifth anniversary of “Life’s A Dance”.

“I’m hoping I might be able to get another artist or two to sing with me on some of those songs, maybe some peers of mine or some new artists that grew up listening to me,” Montgomery said.

Montgomery also expressed a desire to do a song on the album with his brother, Eddie.

“We grew up [guitar] picking and singing together. We’ve never been able to, even though we’ve both had success, I’d like to be able to do a song with him. I’d also like to cut some new songs, and do another album of all-new songs, too,” Montgomery said.

The country artist is a good choice to play at GS for a couple of reasons, Stacie McDaniel, the Director of the Performing Arts Center, said.

“John Michael Montgomery has really good ties to the South. He’s from Kentucky, so I think for the region, he’s a good artist. Statesboro loves country music, and I also felt he was an artist who would connect to a lot of ages,” McDaniel said.

John Michael Montgomery will play at the Performing Arts Center tonight, Sept. 8, at 7:30 p.m. Adult tickets are $26 and youth tickets are $12. The PAC box office will sell tickets until 6:30 p.m. tonight.