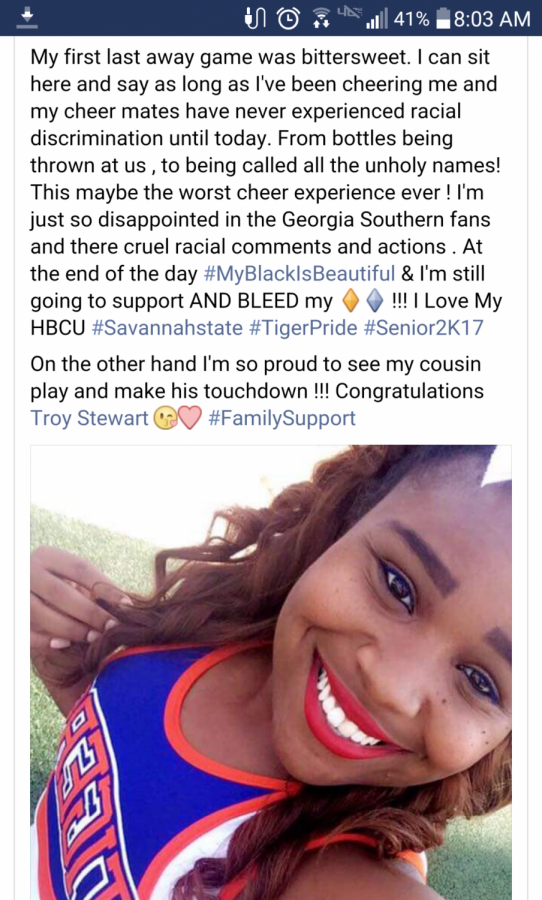 -According to the Statesboro Herald a 22-year-old GS student was removed from Paulson Stadium after reportedly throwing a plastic bottle at a SSU cheerleader. Sims was hit in the face but does not plan to press charges.

Ma’Kyah Sims, senior Savannah State cheerleader, went to social media to share her experience about the incidents that occurred on Saturday.

“From bottles being thrown at us, to being called all the unholy names! This may be the worst cheer experience ever,” Sims said on Facebook.

According to the Patrice Jackson, Dean of Students, key administrators from GS and SSU discussed the fans’ behavior.

Students and alumni weighed in on the incident.

“I think it was ridiculous. We should all have fun at football games without it getting to a personal level. I’m honestly embarrassed,” Brett Thompson, junior economic major, said.

“I must say that for the first time ever I am ashamed of Eagle Nation. As a Statesboro native and Georgia Southern alumni, I expect current students to carry themselves with more dignity and respect than they did Saturday,” Vance Taylor, GS alumnus, said.

We have reached out to Sims and the head cheer coach at SSU for further comment. A full investigation is underway by GS.