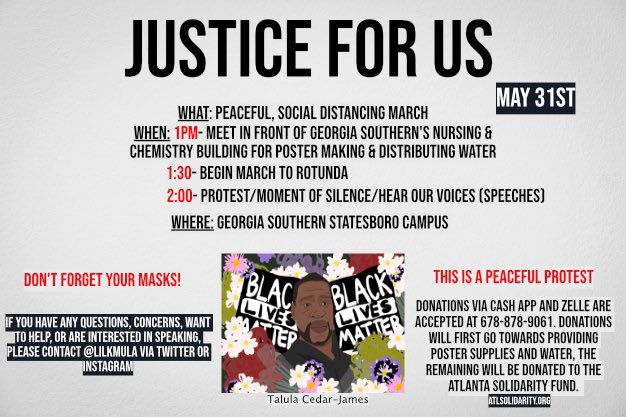 The “Justice for Us” march, organized by GS student Kerrigan Natera, is scheduled for Sunday beginning at 1 p.m.

According to the image, found on Natera’s Twitter, the protestors will meet in front of the nursing and chemistry building for poster making and water distribution.

At 1:30 p.m., protestors will begin marching towards the rotunda for the protest, followed by speeches and a moment of silence.

Natera claims, as of 5 p.m. Saturday, she has raised over $300 in donations to purchase poster supplies and water. Any additional funds will be donated to the Atlanta Solidarity Fund.

According to Natera, officers from University Police, the Statesboro Police Department and Bulloch County Sheriff’s office will also be in attendance.

The George-Anne has confirmed that University Police will be present at the march.

The George-Anne has also confirmed that TaJuan Wilson, Ed.D, associate vice president of inclusive excellence, will be in attendance. Wilson will not, however, be speaking.

GS President Kyle Marrero will not be in attendance, according to John Lester, vice president for university communications and marketing. It is unclear if any other university officials will be present.

To learn more about Sunday’s protest, Natera suggests reaching out to her via Twitter.