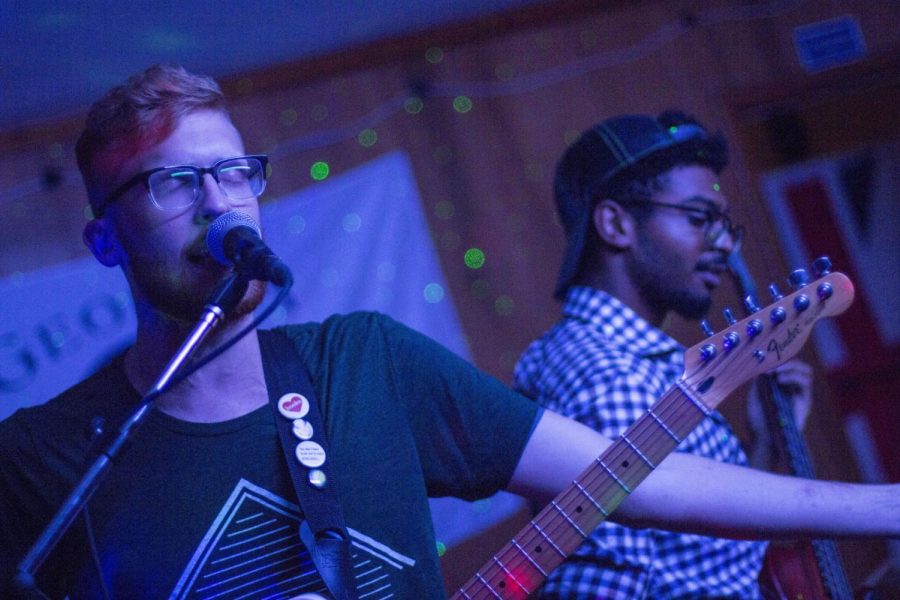 One might think that the house located at 1407 Chandler Road is like any other house. However, it is home to more than college students.

Members of the local emo and pop rock band Birdperson have hosted concerts at their house, nicknamed the BiRDHAUS, since May 2016.

Many of the people and bands that used to play at Bigshow’s now come to the house shows that Birdperson hosts.

Originally, the house shows started out as practice sessions Birdperson was already doing.

“We practice on the other side of that wall and we thought ‘well there’s more room out there’ and we can just invite our friends,” Trey Wilson, Birdperon’s guitarist and a senior music education major, said.

Practices turned into open rehearsals, where people could come by and visit the band during these times. The band members thought that since they let people visit during their practice sessions, they could improve those experiences, Aaron Cooler, Birdperson’s singer and senior music education major, said.

Cooler, Wilson and Anthony McCloud, the band’s bassist and senior international studies major, all live in the show house. Luckily, their two other roommates were okay with their idea of hosting house shows.

“One of our roommates used to be in Birdperson, and the other one has been with us every step of the way, helping out…doing everything it takes besides playing music,” Cooler said. “All five of us are equally invested in these goals that these house shows try to accomplish. Even if we’re not all actively members of Birdperson, we believe in it.”

Birdperson works to bring in bands of various genres, like blues, acoustic and emo, to their house shows. They do this because, in the past, they have been turned away from venues for their genre.

The band looks to book other artists for concerts from outside of Statesboro and Georgia.

“We like giving local bands and local artists a platform to do some of their stuff and bring in the bigger names on the road to bring in a good crowd,” Cooler said.

According to Cooler, one of the main goals of these house shows is to give music enthusiasts a place to enjoy music where alcohol is not the main focus.

“At the house show, we have a no-tolerance alcohol policy. We’re not about making a place for people to come party or get wasted. We want people to come here, have a good time, and listen to music together,” Cooler said.

“We’re trying to teach people that it can be about the music, not necessarily how trashed you are when you’re watching the music,” Wilson added.

Birdperson wants to bring more people into the shows that may have been active in their hometown music scenes. The band also seeks to give people a place to meet others.

“I really like meeting new bands and meeting new friends. It’s always the people who come up and say ‘Hey man, I really appreciate what you guys do here’. If somebody comes up and says that to me, I’ve won for the night,” Cooler said.

The band also wants to share the unique environment of house shows with others in Statesboro.

“It [house shows] is more intimate. It’s like practicing, but for a bunch of people. It’s really fun to watch bands play in our house, because we live in that living room every day, and it’s fun to watch people tear it up,” Wilson said.

The challenges of house shows

Birdperson’s members have to do several things in order to ensure that each show starts, happens and ends smoothly.

“Getting the house ready for the show is the most stressful part. We basically flip these two rooms, our practice space and the living room. Everything in the living room goes disperses throughout the house,” Cooler said.

Cooler, Wilson and McCloud have also had to make structural changes to the BiRDHAUS so it can accommodate a more sound-proof environment.

“We put stuff up on the windows so it absorbs the sound, and you don’t really hear it outside. We didn’t used to have this [addition]. This used to be a patio. It used to be way open,” McCloud said.

The band also had to work to get people to attend concerts over the summer, and the people attending the shows every month ended up being very helpful to Birdperson.

“Now that we’ve built this community of people who are invested in listening to music together and having this once-a-month night, the word’s spread like wildfire ever since school started back,” Cooler said.

“It is possible. It was a pretty stressful thing when we first started, but now it’s second nature at this point,” McCloud added.

House shows can be an interesting venture for someone who has not attended one before.

“Somebody who hasn’t been to a house show or underground music scene in their time might a little bit uncomfortable with it,” Cooler said. “If you see somebody who came here by themselves and they’re standing around by themselves, just go say ‘hi’ to them and let them know that this is a place where everyone’s cool and you can be yourself.”

The band members have high hopes for future Statesboro DIY and underground venues.

“Who knows, maybe this will lead to something like that [a bigger venue]. Hopefully, we’ll have something like the Masquerade here, just something for people to do in Statesboro like they have in Atlanta or Savannah,” McCloud said.

Birdperson is currently working on dates for future house shows. You can keep up with concert dates and more on their Facebook and Twitter pages.