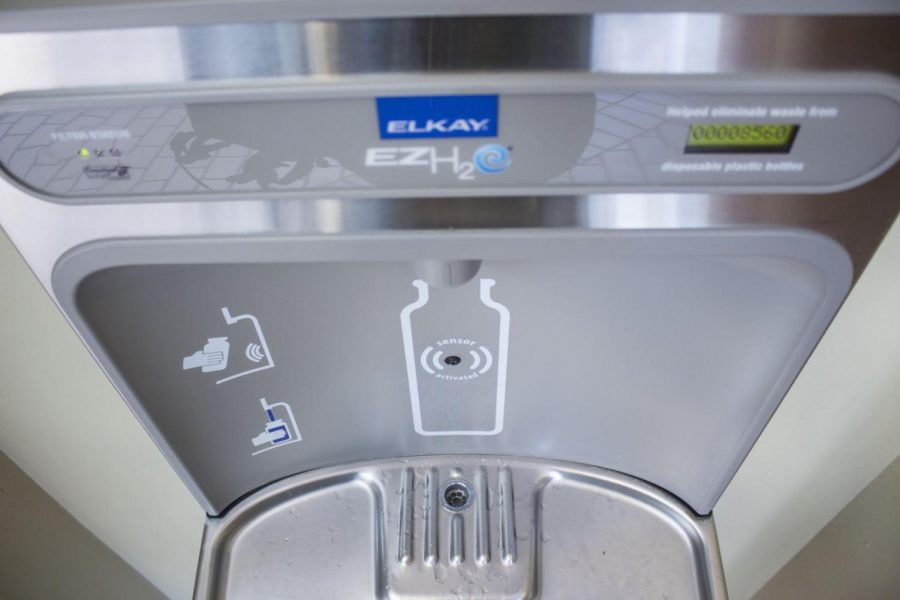 A close up of a water bottle refill station. More will be added to campus in the coming weeks and months.

Ultimately, the Sustainability Fee Committee chose 18 proposals for either partial or full funding.

The grants were established in Spring 2014 and are aimed improving the campus by addressing sustainability in various areas, such as water and waste.

“The goal of the sustainability fee grant program is to improve sustainability on campus in areas including, water, energy, waste, biodiversity, food, transportation, sustainability promotion, and to engage students, faculty and staff in the creation and implementation of these projects,” Lissa Leege, director for the Center for Sustainability, said in an email to the George Anne.

Solar powered ground mount charging stations, water fountain refill stations and bicycle repair stations are among the proposals that will funded this year.

James Farquharson, graduate assistant for the bio and inventory manager in University Housing, wrote two proposals for both the water fountain refill stations and bicycle repair stations. Both proposals were granted funding.

“[I’m] pretty proud. [While] writing them, I was a bit skeptical if we were actually going to receive the funding for it but when I got the email [about funding], I was like, ‘wow, we did it’,” Farquharson said.

“We requested to install about eight to 12 [stations] because we already have 15 of them around housing complexes and they’ve been a huge success,” Farquharson said.

In addition to the numerous stations that will be added in the upcoming weeks and months, funding has also been granted for the Old Register Road Multipurpose Trail Phase 2.

“The [funding] will allow for the development of a trail around the RAC soccer fields, connecting to the Pavilion and Shooting Sports Facility and will extend to the campus greenway,” Leege said.

Nicholas Vaill, freshman electrical engineering major, said that he has noticed the various sustainability projects on campus and likes them.

“The recycling bins are good. The bike racks are too. They really encourage bicycling on campus,” Vaill said.

Vaill would like there to be more emphasis on reusing water for various things on campus.

“A lot of waste goes with water bottles. I would like to see more emphasis on reusable water bottles,” Vaill said.

Leege thinks that the grant is effective at getting individuals to think more about sustainability.

Leege said, “It is now easier to refill reusable bottles than to buy disposable bottles, and that ultimately makes a difference in our campus waste production.”