GS players to keep an eye on this season 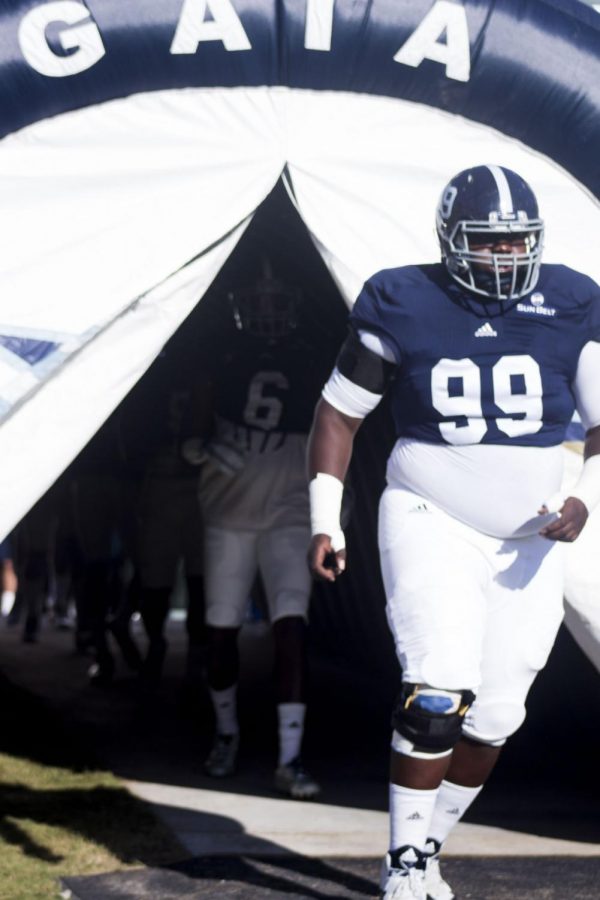 No sports team is defined by the talent or shortcomings of just one player, and that’s especially true in football. It takes 11 guys working together to accomplish their goal. Many Georgia Southern players have defined the goal for this season: winning the Sun Belt. While it will take everybody on the roster to complete that goal, these players will have a big hand in making that happen.

Ellison returns as the anchor to the front four of the Eagle defense in his senior season. The Harris County native has played in 35 out of a possible 36 games in his GS career, and has started 25 of those contests. He has plenty of experience to go along with his immense talent, as he was named Second Team All-Sun Belt last season and is a Preseason All-Sun Belt member this season.

He’ll man the middle of a four-man front that should cause a lot of problems for opposing offenses trying to run the ball. He and Darrius Sapp will plug the gaps up front while Logan Hunt, Bernard Dawson and others bring pressure from the ends.

“We want to make no mistakes and have great effort,” Ellison said. “We want to get after the quarterback and be stout against the run.”

There’s no shortage of star running backs and quarterbacks in the Sun Belt this season from New Mexico State’s Larry Rose III to App State’s Taylor Lamb. Ellison and Co. will look to make their time on the field against the Eagles a miserable one.

Last year, Gallon and Antwione Williams combined to form a pair of dynamic playmakers at linebacker for the Eagles. Williams finished as the leading tackler, with Gallon just behind him. Gallon has also made a name for himself on special teams, blocking a pair of kicks last season and four in his GS career. He has all the tools and experience to once again wreak havoc on defense.

“I learned (from Williams) that no matter what, you have to go hard. Day in and day out he was dedicated to the game and he put in work, and that’s something that I really admired,” Gallon said.

This season, he’ll pair up with another stud at inside linebacker. Florida State transfer Ukeme Eligwe will make his GS debut against Savannah State, and should mesh well with Gallon and the other linebackers.

Gallon has been one of the faces of the program this preseason. It’s his intense shot that’s on the official GS football poster, after all. Summers took him along with Breida to the Sun Belt Media Day, and made him the head coach in a summer camp practice where the older guys coached up some of the younger players.

Eligwe is a former four-star recruit and Florida State Seminole. Now, he’s a starter in the Eagles second line of defense. After transferring and sitting out a year due to NCAA rules, Eligwe will finally get on the field and has a chance to make an immediate impact.

When asked about returning to the field for the first time in two years, he was straightforward about his feelings.

“I’m about to leave all my stress, my anger, my emotions, everything in these last two years…. I’m about to let it all out on Savannah State,” Eligwe said.

While that statement should terrify the Tigers, that’s great news for the Eagles. He was a multi-talented and versatile player for the Seminoles during his freshman year when they won the National Championship. His experience against elite competition and prime time match-ups will help the Eagles when they take on Ole Miss in Oxford and try to dethrone Arkansas State in Jonesboro. Look for him to flash his elite athleticism and skills all over the field this season.

Everybody knows about the star back out of GS now. Four years ago, however, when Breida was just a two-star recruit out of Nature Coast Technical, most people overlooked him. He was either too small or not tough enough to run against Division 1 defenses.

“I knew some of the guys that got big offers from Florida and Florida State and I knew that I was just as good as or better than those guys. I looked at it as motivation to go to college, play Division 1 football and show all those people wrong who should have offered me and recruited me,” Breida said.

Now, in his final season in a GS uniform, everybody knows what they missed out on. He’s on the Doak Walker, Lombardi and Maxwell Watch Lists along with a slew of Preseason All Sun Belt lists. He’s rushed for more than 3000 yards and 34 touchdowns in his career and is primed to put together another huge season running the ball in an excellent offense full of veterans and talent.

When Tyson Summers was introduced as head coach, one of the first things he said regarding the offense was that the Eagles needed to throw the ball more and with better efficiency. With two returning quarterbacks and Johnson leading the receiving corps, there’s a chance the Eagles will do just that in year one of the Summers era.

Johnson was able to put up decent numbers (15 catches, a team-high 249 yards) despite missing four games with a broken clavicle that he injured midway through the last season. Unsurprisingly, he is one of the players most excited about the expanded passing game.

“Now we got more freedom to do what we want. Our quarterbacks can look out there and if they see something, they can check it (the play) and come out to us,” Johnson said.

Johnson is a candidate for a big season if he can stay healthy. He’s had a good preseason, and was one of the guys to score in the spring game with a nifty 18-yard touchdown reception from Upshaw. He’ll be one of the first options whenever the Eagles drop back to pass, and is looking to make a big contribution in his final year.

Offensive linemen rarely make the highlight films and headlines after a big win, but it’s past time the GS big boys got some recognition. The Eagles have had either the most or second-most rushing yards in the FBS in the last two seasons, and Kwon is one of the big reasons why.

Although he will start at center for just the second season, he played in both of his first two years as well. Last year, he was the anchor to one of the best run blocking units in the nation. He was placed in the Rimington Watch List, which is given annually to the nation’s best center. Kwon, however, was quick to deflect praise to his teammates when asked about the nomination.

“It’s pretty cool that I was nominated for that,” Kwon said. “But to be honest with you I’m just trying to win games. I think the reason I got that is because I have great teammates.”

The line has a big task this season, as they’ll have to go up against some nasty defensive fronts in Appalachian State, Arkansas State and Ole Miss. But with Kwon and others up front, the running backs should have plenty of room to run again this season.