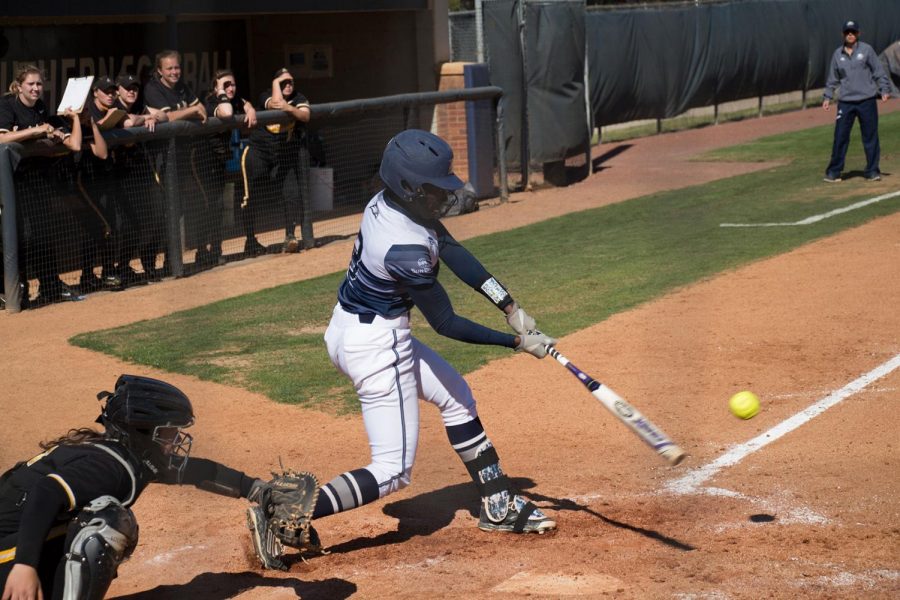 The Georgia Southern softball team played against conference rival Appalachian State in a three game series this past weekend. GSU came out on top sweeping the Mountaineers in all three games.

Saturday was GSU’s alumni day and it featured a double-header between the two teams. The Eagles won both contests by scores of 7-2 and 11-7.

Alumni day is an annual event where the team honors alumni during the softball games. In the first game of the double-header junior infielder Morgan Robinson recorded her eighth home run of the season. Dixie Raley (16-7) was the pitcher for the first game and she recorded the win for the Eagles. Raley pitched all seven innings, striking out four of the Appalachian State batters in the process.

The second part of the double header was an offensive explosion led by Emily Snider. The Eagles were down 3-2 going into the bottom of the third. Infielder Emily Snider gave the Eagles the lead in the bottom of the third inning after blasting a two-run home run. Kierra Camp started out the mound pitching for the Eagles, but the game was finished by sophomore Heather Felt (1-1). Felt recorded her first win on the season.

The Eagles defeated Appalachian State 3-0 on Sunday to finish the sweep of the three game series. Freshman pitcher Dixie Raley recorded her 16th win on the season. Raley had a spectacular performance, pitching a shutout for the Eagles and recording career high 14 strikeouts. This game was designated as the Purple Game where GSU encouraged attendees to wear purple in support of the Walk to end Alzheimer’s and the Alzheimer’s Association.

“Anytime you get a sweep in conference it is huge. It puts us where we need to be. Every game that we can win in conference is important. It is really important to get sweeps to keep us where we want to stay,” head coach Annie Smith said about the importance of this series.

Raley pitched another complete game and only allowed three hits and gave up three walks in the process. This was an amazing output for Raley, already recording high strikeout numbers.

The Eagles have won 23 games so far this season, which nearly doubles their winning total from all of last season. Last year, the Eagles finished 12-39 and finished eighth in the conference. As of now, the Eagles hold the third spot in the conference and are only a few games back of first place. The team has improved in nearly every aspect from last year. The pitching has been better, the defense has improved, and the overall health of the team has been much better.

“We got health would be the first thing. We had a lot of injuries last year, so getting healthy helped. The team has been great. They put everything together and they really bought in to stuff and they worked really hard and the keep things simple. They have a lot to prove and they have a chip on their shoulder,” Smith said.

They will return to the diamond on Wednesday, April 13, to continue their home stand. They will be facing off against Kennesaw State University at 5 p.m.