Steven Fisk shines on the links in freshman season 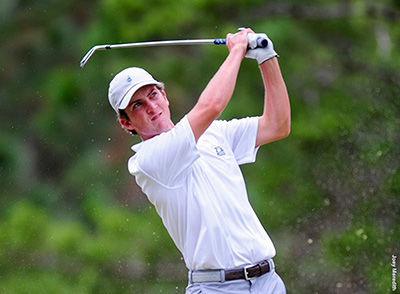 Georgia Southern golf sensation Steven Fisk isn’t your traditional golfer. The Stockbridge native grew up on a par three golf course, which averaged about 100 yards in length, so naturally that gave him the opportunity to work on both his short swing and also his long ball when needed.

Fisk is the oldest of two so he always he knew he had to grow up and set the best possible example for his younger sister. Fisk has become an integral part of this year’s golf team and it can be credited to the large amount of time he has put into his craft.

“I first started playing golf when I was five years old, so about 13 years now,” Fisk said.

He leads the Eagles with a stroke of 1868 and if you ask him what the best part of his game is, he will simply tell you it’s his diligence.

“The way I scrap around and find a way to shoot a good score, and one thing I’d like to work on is the consistency on a day to day basis,” Fisk stated.

He chooses golf over the other sports because of the individual aspect of it.

“Even though we are on a team here at Georgia Southern, we are still out here fighting on our own,” Fisk said.

The Masters is coming up soon and Fisk said he couldn’t wait to watch it. Even though Jordan Spieth is his favorite golfer, Fisk is rooting for Rory McIlory to win because of the heartbreak he suffered a few years ago. However, he isn’t shy about his feelings regarding his favorite player.

“Spieth is my favorite player because of how he grinds, he always seems to get the best out of all of his rounds,” Fisk said.

Fisk first realized that he had the skills to play at the collegiate level around the age of 14, and after taking a year off, he realized that goal was pretty attainable. He would one day like to create his own path and work his way onto the professional scene.

When Fisk is not in class or tearing up the golf course at the Bennett-Ramsey facility, you can usually find him with his teammates.

“I enjoy hanging out with the team; we go out and watch other sports like March Madness. I can’t wait for college football to start back though; I’d pick college football over pro ball any day,” Fisk said.

Fisk plans on making the best out of every opportunity that GSU brings him, and it seems like he will have all the support he can get from his teammates and his coach.

“Steven brings a lot of work ethic, drive and competiveness to the team. He’s a good kid who wants the team to do well and that helps the team chemistry and helps us achieve our team goals,” head coach Carter Collins said.