Blue and White game to play at Paulson 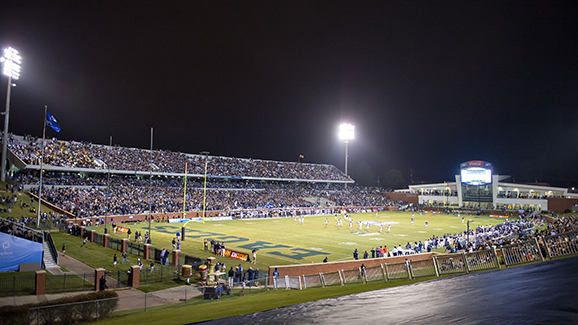 Die hard Georgia Southern fans will make there way to Paulson Stadium to see the standing of their Eagles.

There will also be the Punt, Pass, and Kick competition. This is a new activity for this year. The Punt, Pass, and Kick contest for kids. Children ages 7 to 12 will have a contest to show off there football skills in the areas mentioned in the contests name. The contest will take place on the field before the game. Participation is free and every participant will receive a tee-shirt and the winner will receive a trophy. Check in begins at 8:45 a.m. and the contest starts at 9:30 p.m..

There will also be the 3rd annual Spring Football Tailgate Cook-Off. In this competition tailgate cook contestants compete to make the best tailgate food. At 3 dollars to enter the tailgate zone Georgia Southern fans get to be the judges. The winner gets a trophy, a one night stay at a hotel and two free tickets to the Georgia Southern-Georgia Tech game in Atlanta. The cook-off starts at 10:45 a.m. and ends at 11:45 p.m.

After the game, the championship ring ceremony for the Go Daddy bowl win will occur. The players will be honored with rings for their bowl game win and fans are invited to stay and watch. After the ceremony there will be an autograph opportunity with the players. A limited number of spring football posters will be available at the signing but fans are in encouraged to bring their own items to be autographed.

The game itself starts at noon on Saturday April 16. Admission is free.