The past behind the pastry, Statesboro local rolls out a new path by becoming a pastry chef 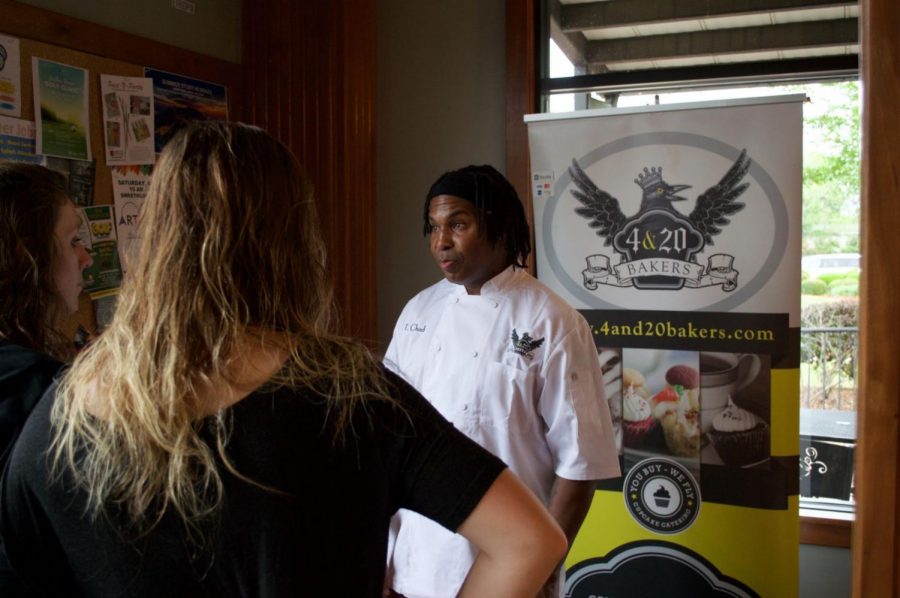 With this year coming to an end, one can’t help but look forward to the adventures summer can bring. It’s important to know that one must always be inspired. As college students in a time of great technological and ideological expansion, there are so many individuals around us to learn from and be encouraged by, especially here at Georgia Southern.

This is the story of a man who is not only a local business owner, but part of our GS community as well, T. Chad Montgomery. Chad owns and runs a completely organic and raw pastry company out of his home and farm in Sylvania, Georgia known as “4 & 20 Bakers”. There, he grows all of the produce for his unique pastries to create the “wicked good” taste only 4 & 20 has to offer. As a Marine, Ex-Bodyguard, business owner, former college football player, professional bass fisherman, counselor for troubled youths, sustainable farmer, and innovator of the culinary arts; Chad can truly inspire the uninspired.

Born and raised in Bridgewater, New York, Chad said that he began pursuing his interests for cooking and farming early in his youth.

“I’ve always wanted to be a Chef,” Chad said “so I was excited to be in a kitchen even at an early age.”

At the age of thirteen he worked as a bus boy in a local restaurant in his hometown, giving him the chance to see life in the kitchen. At the age of sixteen, he worked on a local dairy farm which exposed him to the life of working for self-sustaining produce. From there, he went on to join the marines at the ripe age of seventeen, where he was stationed first in Southern California and then in Japan. During his time out of state and abroad, Chad acquired different culinary influences from different cultures. After his time in the Marines, Chad returned to New York to start his first business and eventually attended Morrisville State College. There, he studied Animal Science with a focus in Equine studies.

“I’ve always wanted a hobby farm as a kid, so that’s why I studied horses” chad said.

During his time at Morrisville, Chad worked at an Eckerd’s, which eventually sponsored him as a professional bass fisherman after placing top 50 out of 1600 anglers at a Wal-Mart hosted Bass Fishing League. During his early years as a professional bass fisherman, Chad was featured as a guest on ESPN’s “One More Cast with Shaw Grigsby”. After graduating from Morrisville and spending some time casting for Eckerd’s, Chad went on to working with troubled-youths in Lancing, New York. He would take them out to his family farm and teach them how to grow, camp, hike and cook. His charitable work didn’t stop there. Chad went on to be a co-founder of an organization called “Cross World Africa” which has aided children and farmers in Africa to this day. In fact, a big part of CrossWorld Africa’s successful development must be credited to Chad for personally establishing a “Sister City program” from the Mayor of Ithaca, NY to the Mayor of Eldoret, Kenya.

In the few years following, Chad continued to find work helping other people. Back in Albany, NY, he was hired by the Department of Defense as a contractor and helped counsel soon to be deployed soldiers and their families cope with the potential stress of being a military family. Even after all these great things, Chad decided it was still time to do more. Thusly, the great 4 & 20 Bakers was born. As an aspiring independent pastry chef, Chad began soliciting his treats to different businesses. Almost immediately, Hilton Hotels in New York decided to not only pick up and sell his pastries in their lobby, but also hire him as their Executive Pastry Chef. Shortly after getting his foot in the door in the pastry chef world, Chad became inspired by a TED Talk wherein he learned about the wonders of utilizing cricket flour to create baked goods. Shortly after discovering this environmentally friendly and protein packed flour, Chad gave a presentation about using cricket flour during a Breast Cancer Survivor Super Food Event.

In the few years following, Chad moved to Sylvania,Georgia to be with his father and start up his self-sustaining, raw-organic dream farm. Although he was able to start his farm, the move to Georgia put 4 & 20 Bakers on hold. So in the meantime, Chad found his way to the great community of Georgia Southern and was hired as a custodian. Within six months of working for Georgia Southern, he was offered a custodial foreman position but immediately turned it down to resurrect his beloved pastry company.

Alas, 4 & 20 Bakers is reborn. Since its resurrection, Chad has proven to be more than committed to get 4 & 20’s name out there. In October of 2015, Chad won four blue ribbons at the Ogeechee Kwanis Festival for “Best Cupcakes” and in January of 2015, he was one of the desert caterers for the Georgia Southern Scholarship and Donor’s Dinner. Most recently, Chad gave presentations at Georgia Southern to students and faculty alike about the positive things that come from using cricket flour, more specifically; sustainability. In this past April, Three Tree Coffee collaborated with 4 &20 Bakers to sell Chad’s pastries at their location and are currently working on establishing the first ever gourmet pastry and coffee delivery service. This service would be provided by none other than Chad Montgomery himself.

Chad has done great things in this world and has no plan to stop. With a drive and passion like that, one can’t help but be inspired. In the wise words of Chad himself

“Find a Mentor, then be one”