Still Striding, One student’s story of survival and standing tall 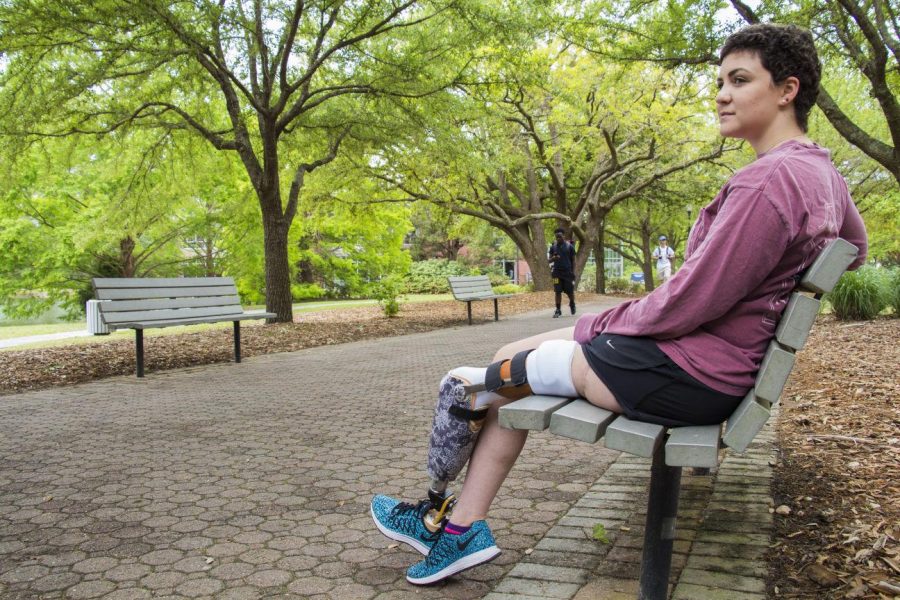 For college students surviving often means staying up late and making it through finals. For Lexi Murry, surviving took on a whole new meaning when she lost part of her leg to cancer.

“I was always the kid that had the mom with cancer, but I never expected to be the one with cancer, and my mom having to watch,” Lexi Murry, senior psychology major and cancer survivor, said.

Lexi’s mother, Heather Murry, survived three different types of cancer. Each appearing five years after the other when she was considered cancer-free. During her third round of cancer in 2012, she went through radiation and chemotherapy treatments. Having three girls in college at the time, Lexi was the closest at Georgia Southern and was always on call in case anything were to happen.

In January 2015, Heather joined the Survivorship Clinic, wishing to help another woman through the process she had been through time and time again. Little did she know that only three weeks later, that woman was her own daughter, Lexi.

“All of my cancers were tissue related, in the brain, breast, ovary – so I had never had bone cancer, and I think if I had took her her experience and all three of mine, I would say that she had it way worse than I did. It’s so different but so similar,” Heather said.

“When we went through recruitment, she sat down next to me and started telling me her whole life story, like about how her mom had cancer and really personal information that most people don’t tell you. I was kind taken back, but somehow we became friends,” Smith said.

Over the summers, Moore worked as a lifeguard with Lexi at Splash in the Boro. During the end of the summer in 2014, she noticed Lexi’s knee was beginning to bother her.

“It started with a dull pain in my leg, I thought it was my knee, and it just got worse and worse. Every time that I would go to work the people at work would always say you need to get it checked out… I couldn’t get it checked out until around Valentine’s day,” Lexi said.

Only a few days after her 21st birthday, Lexi went to the doctor for her knee. Like Moore and Smith, Heather was sure that Lexi had a torn ligament from being active. All of the symptoms made sense, but an MRI said otherwise. A mass located in her upper tibia was identified as a tumor, specifically osteosarcoma.

“We (Leanne and Lexi) don’t really talk on the phone… we just text all the time, so it was really weird that she was calling me… her tone was shy and quiet, very unlike her normal self,” Moore said.

Smith received the call as she was leaving the library that night. “It was weird, she was like ‘hey, I have cancer’ and I was like ‘what – ok what do you mean?,” Smith said. In that moment she wanted to do anything to help Lexi, especially spend as much time as they could with together before she left for the hospital the next day.

For the next nine months, Lexi was a patient of Scottish Rite, a children’s hospital in Atlanta, Ga. There she underwent three different types of chemotherapy, causing her to lose her hair, drop weight and feel weak for months at a time.

In March, a month into treatment, Smith was able to visit Lexi for the first time. Both Smith and Moore said that it didn’t change who Lexi was in their minds to see her in the hospital bed after so long. They were both happy to see she was there and everything was going well.

“She wouldn’t remember that you visited, which was my biggest thing, because she forgot that I came. Not on purpose, but she had chemo-brain,” Moore said.

Everything that was put into her body was rejected; food, fluids, even treatment. With so many medical complications, the options for surgery then became risky. In May, when the time for surgery came, Lexi debated between full amputation and rotationplasty. The rotationplasty was chosen due to it’s minimal limitations after recovery, and in the case of a medical complication, there was an opportunity for full amputation.

“I asked her [Lexi] ‘do you want to hide everything that you’ve been through on the inside or do you want to show people who you are on the outside?’ and she said, ‘I feel like I don’t want to hide anymore, I’m tired of hiding,” Heather said.

Lexi returned to Georgia Southern spring semester of 2016. Although the chemo is over and the cancer physically removed, her story will continue to stride with her each and everyday.

“I think there’s a common misconception that ‘oh [cancer] is over when the chemo is over, like no, it’s not over yet. I have to wait five years until I’m considered completely cancer free. I would say that I’m a cancer survivor, but not cancer-free,” Lexi said.

Heather describes the aftermath of cancer as a difficult transition that allows one to find their true friends. During the process, many people come together for support, but after the hospital-scene ends, everything is considered back to normal, when in reality, it will never be.

Lexi, her mother Heather and every cancer survivor’s journey will continue to live with them, as well as the people around them.

Smith said, “People don’t realize just how scary [having cancer] can be. We’re never going to know what [Lexi] went through. We can try to be as supportive as we can, but we’re still not going to know.”