AJ Hamilton is embracing her final season as an Eagle 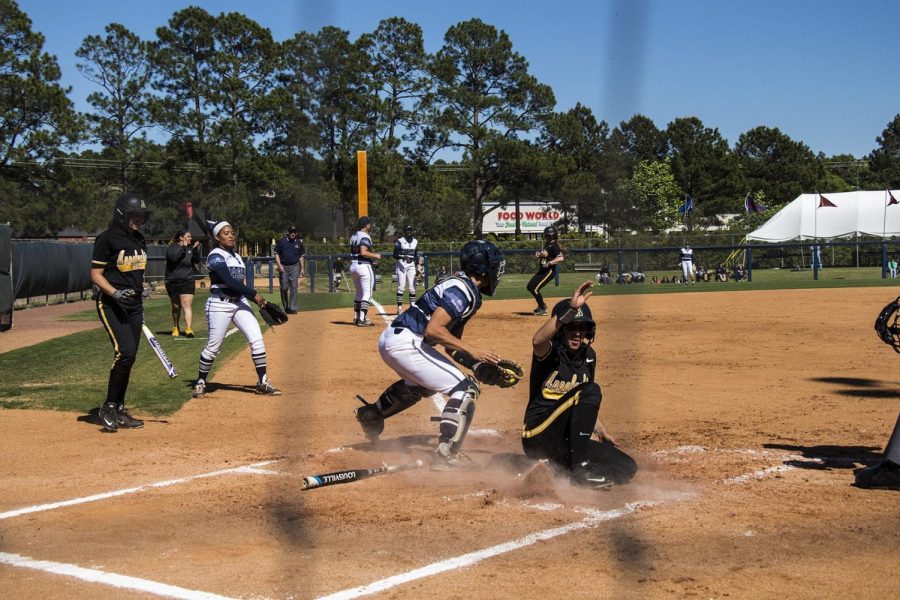 As the Georgia Southern softball season has gotten underway, one player stands out above the rest. Her name is A.J Hamilton, the senior catcher from Tallahassee, Fla. Hamilton is the only senior on the team and she is embracing the role as the leader and role model.

“Every day I need to come out here making sure I’m on my a-game and everyone else is on their a-game,” Hamilton said.

Since her freshman season, she has been putting the pieces together for her role as the leader of the team by setting the tone of “take no days off”. She started all 63 games in her freshmen season at catcher and since has started in over 170 games.

This season she is second on the team in home runs, but accolades is not what makes her the leader and role model she is. Hamilton puts a lot of pressure on herself to be better and make the team better. GSU head coach Annie Smith does not try to add pressure on Hamilton, saying the catcher does it by choice.

“She puts a lot of pressure on herself, to be a good leader and that’s just the expectations she puts on herself, in that we have in our program to work together,” Smith said.

Despite being a role model for her team, she has also embraced being oneto her younger brother Evan. Hamilton and her brother could not even go outside and throw the ball together when they were young because she would always be down his back. He looks up to her now and every chance he get he is asking her to help sharpen his game.

“Now that were older, I feel he looks up to me a lot when I go back home and when we are in the cages, he would be like ‘tell me what you see,’” Hamilton said.

When she goes back home, she calls up her friends from Tallahassee and they get together to get a game of flag football going. This may be something fun to do now for Hamilton but it was serious enough when she was younger to learn from it. She gives a lot of credit to this sport with helping her become a leader in softball.

“I learned a lot of things from flag football like being in command and taking orders from coaches and it rolled into one and one sport helped for the other tremendously,” Hamilton said.

Hamilton has helped her teammates by putting pressure on the juniors to be able to lift her back up when she is not doing something right. She hopes that by the juniors keeping her grounded will prepare them for next season.

Hamilton will continue her leadership Wednesday when the softball team hosts Kennesaw State at home.