Fourth Annual ‘Out of the Darkness’ Walk to be held Saturday 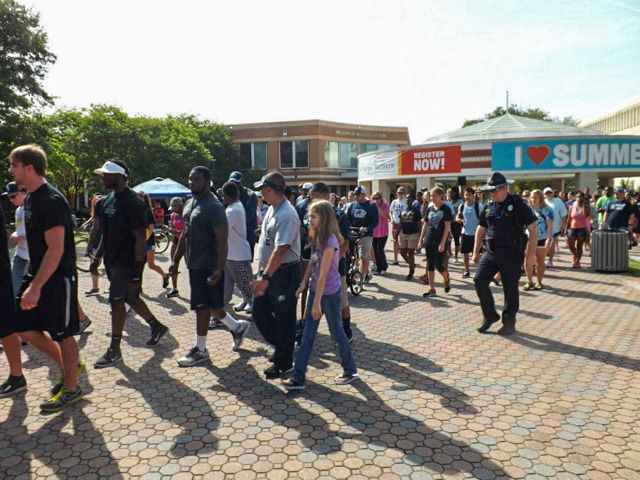 Active Minds is partnering with the University Wellness Center to host an Out of the Darkness Walk Saturday, April 23, in support of the American Foundation for Suicide Prevention. The walk will start at the Rotunda at 10 a.m. with check-in and registration starting at 9 a.m.

“The money goes to creating programs to help those struggling with depression or thoughts of suicide. It also creates programs for people to learn the signs and symptoms of depression to help those in need,” Emily Morrow, senior marketing major, said.

Morrow herself was personally affected by suicide when her freshman year roommate took her own life. For this reason, Morrow says she has decided to help with this year’s event.

“I feel it is important that people know that they are not alone in such an important matter, and that walks like this help people to keep fighting because we are collectively fighting the disease rather than doing it by ourselves,” Brian Sawyer, president of Active Minds and senior psychology major, said.

This is the fourth year that organizations have hosted this event on Georgia Southern’s campus.

These walks are hosted on college campuses around the nation in hopes that students will become more aware of the threat that depression and suicide hold.

According to the American Foundation for Suicide Prevention (AFSP) website, suicide is the second largest cause of death in people ages 18-24.

AFSP hopes that by hosting these walks across the country and putting the money towards various programs, they can lead toward a 20 percent drop in the annual suicide rate by 2025.

“Being the president of Active Minds, I feel it is a duty of mine to break the stigmas tied to one of the biggest diseases face by most students,” Sawyer said.

In addition to creating educational programs about suicide and depression, the money raised by the Out of the Darkness Walks goes towards suicide prevention research, advocating for public policy and supporting what AFSP calls “survivors of suicide loss.”

This year a goal of $5,000 was set for Georgia Southern’s walk and the goal has already been met and exceeded with a total of $6,560 being raised so far. However, they are still hoping for more.

“It’s a really important issue to take seriously because we tend to dismiss these things as not serious problems. It affects so many people’s health that it deserves to be noticed and recognized as a legitimate issue rather than a flippant one,” Westley Jamieson, freshman mechanical engineering major, said.

Jamieson has known of people who have dealt with depression and anxiety and has seen how these issues affect those close to him.

Registration for this year’s Out of the Darkness Walk at GSU can be done in person on the day of the event or online at AFSP.com. Online registration requires users to search for Georgia Southern’s event and then register.

Online registration will close at noon Friday, April 22, but walk donations will be accepted until June 30.