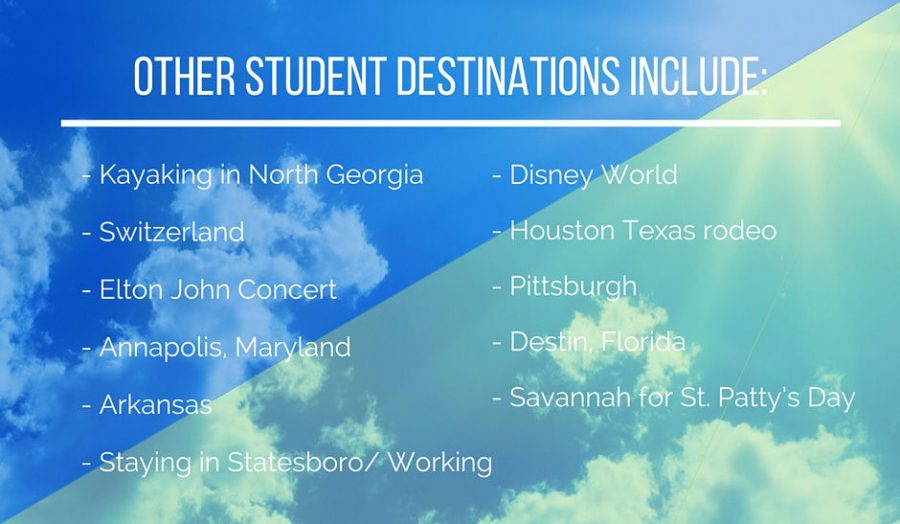 It’s that time of the year when college students try to save more than just beer money, attempt to put down the milkshake and strive a little harder to get through midterms. The light is at the end of the tunnel.

A light none other than Spring Break. Student’s inner ‘spring breakers’ are just scratching from the inside, ready to get out and release the beast.

Unfortunately, due to many, many years of ruining the public beach that made its mark as the ultimate spring break destination, Bay County has changed their alcohol laws for the entire month of March. Basically, no more drinking on Panama City Beach.

By now, this is old news. But come on, one can’t expect a county to deal with excessive public intoxication, illegal drug use and sexual activity forever. That kind of stuff doesn’t wash away with the tides. Just blame the inner rachetness that comes out of people for some reason on this particular week. The new question here is, where to now?

Word-of-mouth around campus seems as though Gulf Shores has it coming for them this year. From recent social gatherings, to on the Blue Route, to just sitting in class, there has been continuous buzz about the Alabama shore lines all around Statesboro.

“We hope that it’s a little bit bigger this year, we anticipate bigger crowds,” Grant Brown, Gulf Shores Public Information Officer said in a phone interview. “A lot of rules and regulations we have in Gulf Shores are similar to what Panama City just recently added, so there’s no way for spring breakers to come here and do what they did over there…We’re a family friendly beach destination and we have good rules and regulations in place to make sure we protect that,” Brown added.

So yes, they are preparing for the arrival. But don’t be so sure that this family-friendly beach will be the next PCB.

Alabama isn’t the only place students will be traveling to, however. When asked about personal plans, students answered with a variety of answers, versus just the typical drunk beach trip. Gulf Shores may be popular, but people are also finding other destinations to make the most of their break. Some trips probably ending with a more memorable week then those going to Gulf.

“I’m going to Colorado because I have a few buddies that live there and snowboarding is one of my favorite things to do,” Peter Shank, freshman finance major said. “My mom manages a few hundred condos in PCB and Destin, and she thinks within the next few years it won’t be a spring break destination at all.”

“I’m going on a cruise to the Bahamas and Grand Turks with my mom and sister,” Rikki Hagerty, sophomore graphic design major said, “because it’ll be relaxing and we won’t have to worry about all them crazy college kids in Florida.”

“I’m going to Universal in Orlando, Florida with a couple friends,” Luis Mendoza, senior exercise science major said. “I’ve been to PCB three times and it’s definitely a good time. I’d probably go back but not anytime soon. There’s been a lot more violence related accidents, like that shooting incident that lead to alcohol being banned.”

Though the long-lived run of PCB is over, we will always find a place to throw down. Just remember to keep it safe, use protection and enjoy responsibly. All students have to make it back alive after the week is over.