Eagles continue best season in 15 years with win over Mercer 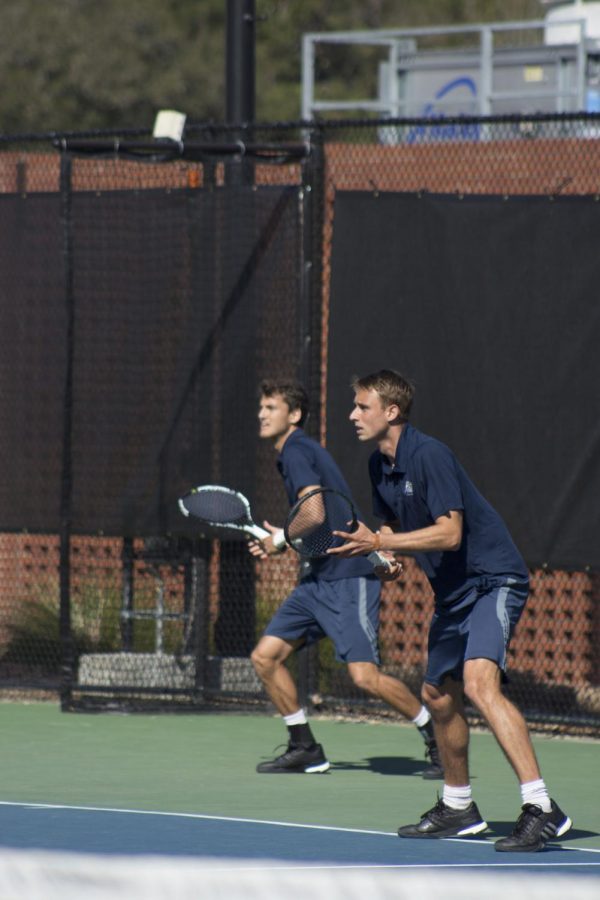 Last season, the Mercer Bears beat the Eagles 3-4 after closing out a tiebreaker. The two teams met again on Tuesday for a rematch. After a decisive doubles point for GSU, the Eagles overcame their opponent to defeat them 5-2. Men’s tennis now holds a 13-5 record with a four-game win streak now. The team has been finding success this entire season and they have taken major steps since last year.

After a loss to UNCG on March 12, the Eagles have changed up their doubles teams. They are now 3-1 on this cycle of doubles teams with a four game team win streak.

Redshirt junior Daniel Casablancas and senior Ristomatti Lanne play at the No. 1 team for doubles. They defeated Mercer’s Sam Philp and Arnav Mohanty 6-0. Junior Christian Kerrigan and freshman Ze Moya hold it up at the No. 2 team and won their match 6-2. Sophomore JC Alcala and sophomore Eddie Landin at the No. 3 earned a 6-2 victory, giving the Eagles a 1-0 lead in the match.

“I feel that today, we came out with energy,” Landin said. “We were really fired up in the beginning of doubles and throughout the end of doubles. At the beginning of singles, they were out on top of us and we were a little hesitant. But we stayed with what we know: our best strategies and tactics. We went with those, we stayed disciplined, and we won.”

In singles, Landin was the first to find a win for GSU at the No. 5 spot. Alcala followed with a win in the No. 2 spot. Mercer did get a win at the No. 6, but GSU turned it around with the clinching point when Lanne won his match.

A bit of a misunderstanding at the No. 3 spot match between Casablancas and Arnav Mohanty resulted in a forfeit by the Eagles. Their match’s outcome wouldn’t matter because they already claimed the team point, but some of the singles matches were decidedly still going on. Although Mercer earned the forfeit, Moya at No. 4 defeated his opponent to give the Eagles the victory.

GSU will get to play The Citadel in Charleston, SC this Saturday, April 2. The Eagles will return home to play against Abraham Baldwin Agricultural College that following weekend on Saturday, April 9.