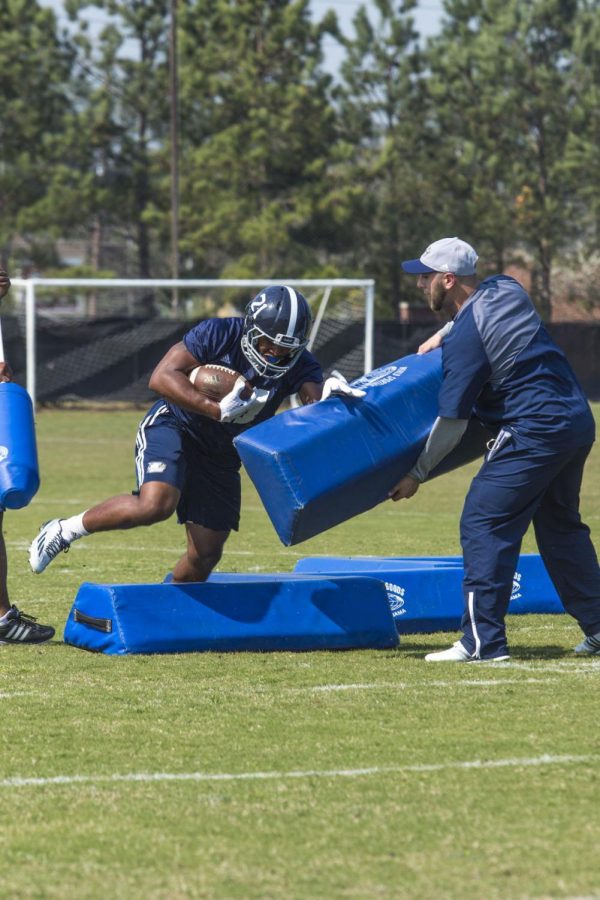 Georgia Southern had their first day of spring practice last Thursday under new head coach Tyson Summers. Coach Summers wanted to change things up and bring a new feel to the practices. Summers decided to play loud music during the practice, hoping that it would bring new energy and force the players to communicate with each other.

“They are all making a lot bigger deal of the music than I am. I like that the music makes everyone communicate is the big thing. When it’s loud, it creates chaos and it makes the coaches have to be very deliberate with what they are saying, it makes the players in a no huddle offense have to be deliberate,” Summers said.

Communication was key and senior quarterbacks Kevin Ellison and Favian Upshaw were prime leaders. They are competing for the starting quarterback position and you could see them both openly lead this team.

“It was a lot of fun, coach had the music going. He said that he wanted to get the juices flowing so it was a lot of fun, everyone was getting back in football and had fun out there today. Coach put us through a lot in spring workouts, but it will take a while to get back into football shape,” Upshaw said.

During the offseason there was an overhaul of coaches and players now need to learn a new scheme. Coach Summers is trying to make it fun so that the players can catch on to the schemes fast.

“For the most part we ran a lot of our schemes pretty well and everyone had a good understanding of what was going on. They do a great job putting us in meetings and making sure we know the fine details. I love this coaching staff and I can’t wait to see what we can do,” Upshaw said.

As the quarterback for this team Favian Upshaw is learning to be more vocal as a leader. Other players are looking to him to show his experience and his leadership skills.

“Coach wants me to be more vocal. I like to lead by example, but I am a senior now. I’m pretty old compared to other guys out there. It doesn’t hurt to be vocal. I’m just trying to set a good example for the guys on the field and of the field,” Upshaw said about his leadership skills.

This is something that players were looking forward to. It is always great for players to have new and fun practice environments. For seniors, it is about how can the vibes on the team change and for the incoming freshman it is about coming into a fun and energetic practice environment. Players are still trying to get back into football shape. It will take a few practices for this to happen, but running around in the Statesboro heat for 2 ½ hours should get them there pretty quickly.

Practices have started out on the right foot and hopefully this will lead to even better upcoming practices. The Eagles will start their 2016 season off September 5th at West Virginia.