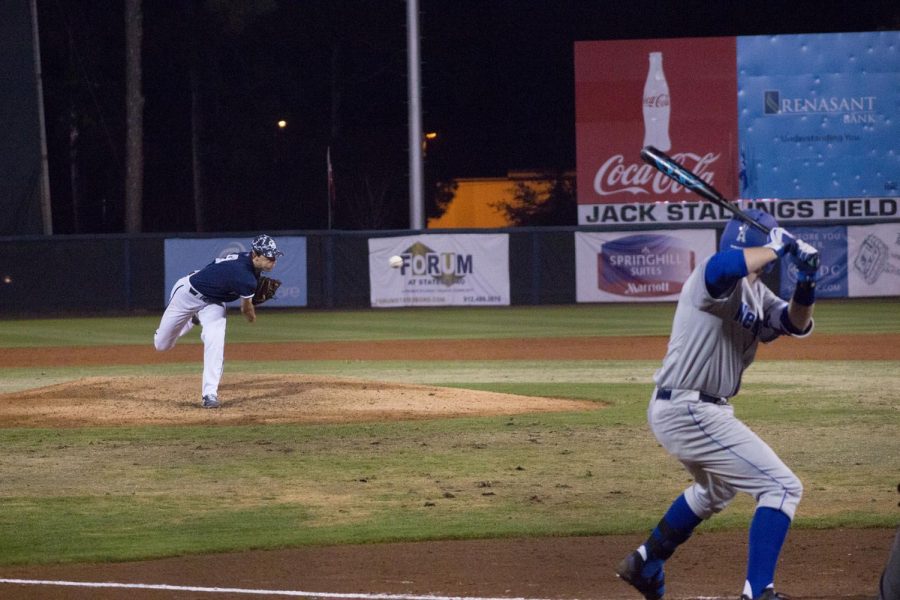 Cameron Dunn and Stephanie Matzelle
The Georgia Southern University baseball team hosted the Memphis Tigers this past weekend for a three-game series. The Eagles took two games out of three from the Tigers and improved their season record to 7-5.

On Friday, GSU defeated UM in a 3-2 win over the Tigers. Logan Baldwin led the Eagles with three hits and a run scored. Evan Challenger went 7.1 innings and struck out eight batters and gave up just two hits. Adam Kelly and Chris Brown came on in relief and combined to shut out the Tigers in the final frames.

The Eagles played a more complete game on Saturday, shutting out the Tigers 5-0. GSU finished with 7 hits and 4 RBI’s. Freshman Chase Cohen went 6.1 innings on the mound and gave up just one hit and struck out seven. Head coach Rodney Hennon was proud of the team’s performance.

“We got an outstanding pitching performance from Chase Cohen, he was on top of his game tonight. We did a good job. I think they had one lead-off man on all night and when you can do that it takes a lot of pressure off your defense and the bottom of the order stepped up, I thought we got some good production down there tonight and played pretty clean defense and we were able to put together a solid game.” Hennon said.

GSU dropped the final game of the series on Sunday, losing 6-4.

Kent Rollins led the team with two hits and 3 RBI’s from the leadoff spot in the lineup.

UM RF Jake Little scored in the top of the third to give the visitors the first lead of the series. GSU’s Brian Eichhorn got the start and went 2.1 innings before being relieved by Landon Hughes. Hughes has been used as both a starter and a reliever this season.

After falling behind 5-1, the Eagles scored three runs in the bottom of the eighth to bring them to within a run. They got a runner on base in the final frame, but couldn’t push him across, making the final score 6-4.

“Little things were the difference today,” Hennon said. “Memphis put the ball in play and did a good job of executing offensively. We had opportunities with runners in scoring positions, and we’ve been doing a pretty good job there, but we weren’t as sharp today. We have to learn to finish a weekend off. When you get into position after winning the first two and having an opportunity to sweep, you have to be able to finish the deal. Hopefully we can learn a lesson from this moving forward.”