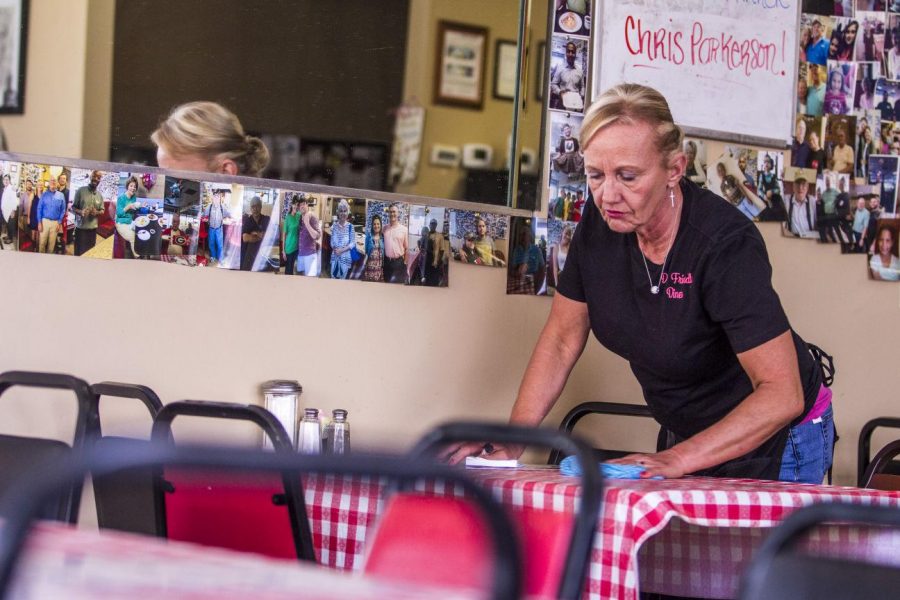 The homely and quaint little restaurant of D’s Friendly Diner lies in the Statesboro Square Shopping Center right off of Northside Drive East and ironically right behind a Waffle House. The Diner, which opened its doors four years ago in June of 2012, is owned and operated by Dana Smith.

Dana Smith, or more commonly known as “Miss D” opened the Diner in honor of her mother, who had owned a diner in Statesboro many years ago.

“The restaurant is named after my mom’s old diner which was called ‘The Friendly Diner’,” Smith said.

D’s current location used to be a breakfast place called “Mr. Omelette” where Smith worked as a waitress. When it was time for Mr. Omelette to close, Smith knew she had to buy it and open up her own restaurant.

“I missed the customers from Mr.Omelette,” said Smith, “I loved making friends with customers and eventually calling them family, so I wanted my own place where the customers become family.”

Since it’s opening, the diner has had no advertising and has had very little public recognition. In 2015, a local Statesboro magazine called Fabulist, awarded D’s with the “Best kept secret in Statesboro” and the “Undiscovered restaurant in Statesboro” awards. Other than the published awards, the customer base has been accumulated purely by word of mouth.

Upon walking into D’s, there is an immediate sense of comfort as walk-in’s are welcomed by Miss D or one of the waitresses with a “ Hey y’all! How are you?”. Along with the warm greeting, one will notice the walls are mostly covered with pictures of smiling customers who most likely become regulars. To Miss D, her customers are her family and she will make sure to make anyone feel that way.

John Milloy, a regular of D’s, explained how Miss D’s genuine care for strangers is what made him become a weekly customer.

“I had come to Statesboro about four years ago to attend the local alcohol rehabilitation center and eventually moved on to living in a local halfway house,” Milloy said, “and she would hire people from the halfway house because she’s very supportive of people in treatment, so we wanted to help and support her for helping us…Now I come weekly because the food is great, everyone is always friendly and in a small town like Statesboro, supporting a local business is important.”

Not only are the employees of D’s hospitable, but the food is incredible as well. They offer every traditional southern style breakfast and lunch dishes one could think of, as well as offering weekly specials.

Billy Boan, a cook for D’s diner, expressed his feelings about Miss D, the customers and why he loves working for the diner.

“I’ve always enjoyed cooking and worked in different restaurants but I always wanted to work as a flash cook… Dana hired me three years [ago] and I haven’t left since,” Boan said.

Even though D’s Diner has a great customer base of loyal regulars, they would like to see more Georgia Southern students come to enjoy the friendly dining experience they have to offer.

“We’re a good alternative to the franchise breakfast restaurants, especially for students. We have a friendlier environment and the food is better,” Boan said, “and that’s why we want to see more Georgia Southern students become regulars because we’re family here and Dana is a great role model. She’s a great example to show people that you can improve yourself and still help others.”

Eating at D’s Friendly Diner makes one quickly understand how that the name is fitting to its character and their great home style southern breakfast.