Yoga and meditation: a healthy way to combat mental illness 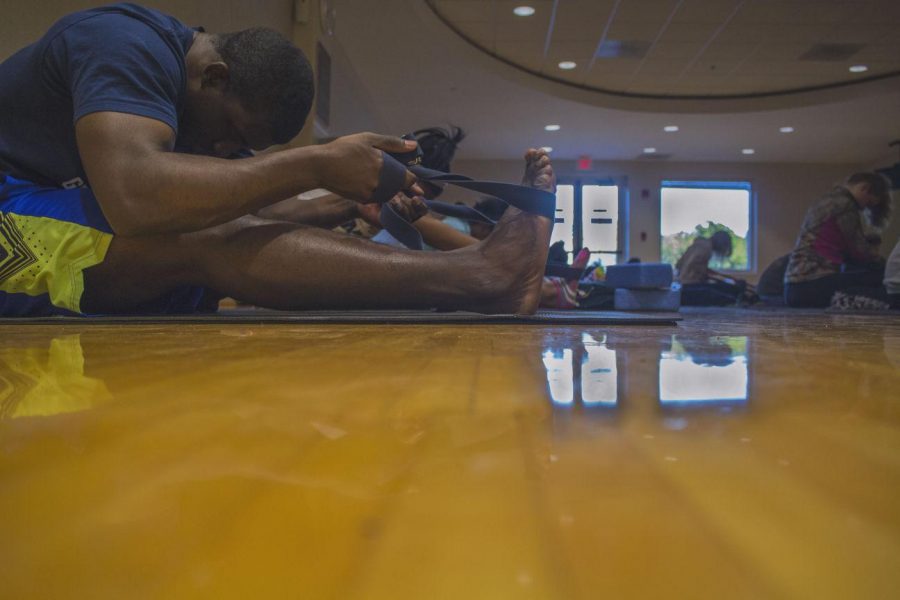 Anxiety, depression and other mental illnesses affect many college students, who already face the constant pressure to succeed in a fast-paced academic environment. Yoga, along with other forms of exercise, can offer a healthy way to cope with stress and mental illness.

Michele Martin, the university wellness program director, struggled with depression in the past, but she found relief in exercise.

“Exercise is considered a coping mechanism for mental illness. Whether it’s anxiety or depression or simple stress-management, exercise is a mode of release,” Martin said. “I have had some struggle with depression in the past. I found yoga to be very beneficial.”

Exercise increases blood flow and sends endorphins—the brain chemicals that help relieve stress and create feelings of euphoria—through the body, according to Martin.

For Martin, yoga was the calming, low-intensity exercise that helped lift her from the oppressiveness of depression.

“Yoga is a form of exercise that does not have to be very intense, and at the same time, it’s very purposeful and mindful. It’s quiet, it has a connection for your mind and your body, and in that regard, it could be the starting point for somebody,” Martin said.

In addition to the steady, calming movements of yoga, people often practice meditation during and after the exercise.

“I had a lot of anxiety problems growing up, and I tried a bunch of coping methods, and nothing really fit for me except for when I started doing yoga and meditation,” Easterwood said. “I was learning how to remove myself from all of the stuff going on in my life, and I could just be me for an hour or two and not worry about anything.”

Meditation can help alleviate symptoms for those who suffer from anxiety, and it can also help people with typical stress-management.

“[Meditation] definitely helps with stress, because it helps to clear your mind for a while. And that helps to bring out creativity, so that helps with classes, which is the biggest cause of stress for college students today,” Easterwood said. “It also helps you realize that the biggest problems in life aren’t as big as they seem. You can just let go.”

“[Yoga] makes you focus on your breath, and as we know, breathing techniques really help to calm us down, which is why breathing techniques are often prescribed to patients with anxiety and depression,” Flury said. “It really helps to sort of bring you down from that heightened, scared place and puts you back in your mind and your body.”

Kathryn Carrico, sophomore mechanical engineering major, is a regular at the RAC’s yoga classes, where she can take a refreshing break from the stresses of school.

“I really think [yoga] helps me to clear my head. To not think about anything really helps to take away a lot of anxiety and worry that I carry through the day, because so many things build up, and then, I just let it go,” Carrico said.

For those who suffer from mental illness, finding motivation to exercise can be difficult. Martin recommends taking small steps, rather than immediately doing challenging workouts.

“It could be as easy as taking a fifteen-minute walk. I think people generally think [they] need to exercise for a half-hour or an hour to see a benefit, but that’s not accurate,” Martin said. “If somebody could muster up the ability or energy to do ten minutes, then, the next week, they might be able to do twenty minutes.”

Exercising with a friend can raise someone with depression, anxiety or stress out of a mode of isolation, and friends can hold each other accountable and raise motivation, Martin said.

For beginners, Easterwood and Flury offer a few tips for easing into yoga and meditation.

“I would recommend the Yin or Restorative Yoga, which I teach on Sunday nights at 7 p.m., because it will really get you into the flow of it and the understanding of it without it being a super-intense workout at first,” Flury said. “Most beginners really enjoy that, because you get really stretched-out, and people realize how tense and tight they are.”

Easterwood teaches the Yoga and Meditation class, which he recommends for beginners. He noted the importance of taking small steps with meditation.

“You want to start with five minutes or four minutes, and see how you’d feel. And you do that a couple of times a week until you want to start building up from there,” Easterwood said. “You definitely want to do guided [meditation] for a while. It definitely helps to have someone speaking or telling you what to do… Try different things and [see] what works for you, and then start building up the time.”

While yoga and meditation can help many people alleviate anxiety, stress and depression, all forms of exercise can improve physical and mental health.

“It doesn’t matter what the mode of exercise is,” Martin said. “If it’s walking, if it’s yoga, if it’s aerobics, if it’s Zumba, if it’s Crossfit, whatever it is, all exercise does the same thing to the brain. There’s not any one way to go. I would encourage people to do what they enjoy. Do what’s easy. Do what’s helpful to them and their situation.”