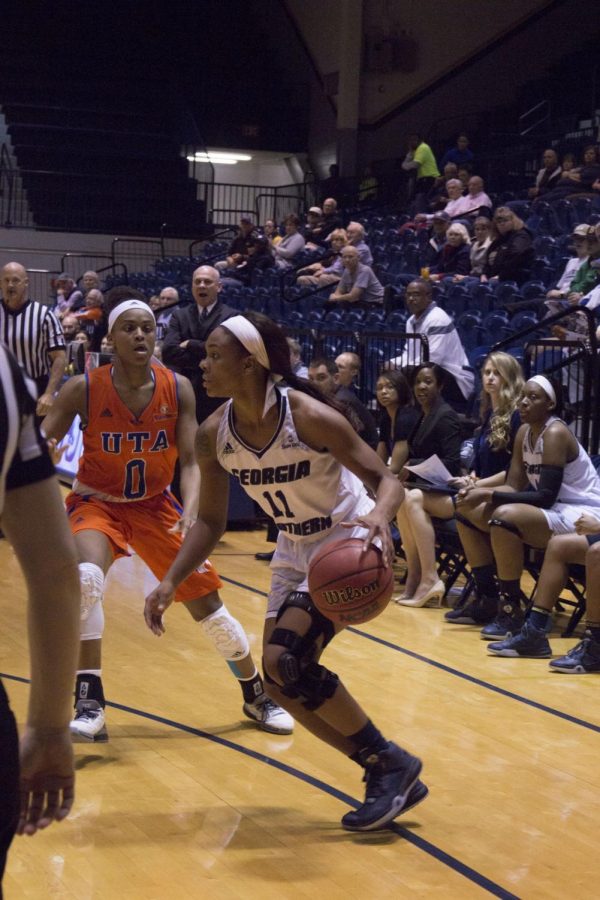 The Eagles went on a two game road trip playing Troy on Thursday and playing the University of South Alabama on Saturday. They lost both games narrowly losing to Troy 68-84 and South Alabama 45-48.

The positive thing that the team can take away from these losses is that this is a very different team than two months ago and their leading scorer Angel McGowan scored the 900th point of her career against Troy.

That 900th point was not easily earned. McGowan finished the game against Troy with just six points, as the Trojans held her to 2-13 shooting from the field. She was able to turn the corner a little more against South Alabama finishing that game with 10 points and shooting 4-15 from the field.

“She’s just a great competitor and I have to tip my hat to her because she’s had to make some adjustments in her game this season with a new coach and new system,” head coach Kip Drown said.

Angel McGowan is etching her name in GSU women’s basketball history. She is already on pace to eclipse the 1,000 point mark in her career before the end of the season. McGowan averages 14.8 points per game, and she will need to average 14.4 points per game over the final six games to reach 1,000 points in her career. She will be only the 23rd player in Georgia Southern women’s basketball history to eclipse 1,000 points. If she does not reach it this season, she would likely hit the mark in her senior year.

Other than McGowan reaching her 900th point during this road trip, the team as a whole showed that they are going in the right direction. They were down by 22 early against Troy and they never stopped fighting. The moment where they could have rolled over and let Troy run away with the game, the Eagles applied pressure and cut the 22 point deficit to six. They outplayed the Trojans the majority of the third and fourth quarter. The Butler sisters led this charge. Patrice Butler finished the game with 19 points and her sister Sierra Butler finished with 13 points.

“I think tonight was another step in the right direction because earlier this year, we might not have been able to make that late run,” Drown said.

Against South Alabama, GSU got off to a good start and led the Jaguars 31-23 after the first half. The Eagles came out in third quarter slow and it became the trend for the rest of the game. They were outscored 25-14 in the second half. Patrice Butler led the Eagles in scoring with 13 points followed by Alexis Sams and Angel McGowan with 10 points each.

This is a tough loss for the Eagles, but they are looking to bounce back. They are starting their four game home stand this Thursday Feb. 18 and they are hopeful this can help propel them into the Sun Belt conference playoffs.

“The team has been on the road for three of the last four weeks which is a tough stretch, but we have two of the best teams in the conference in Arkansas State and Little Rock coming in first and I think Little Rock is playing as well as anybody right now,” Drown said.

The Eagle’s next game is on Thursday at 5 p.m. against Arkansas State in Hanner Fieldhouse.