Eagles down Panthers 54-52 behind Hughes 21 points 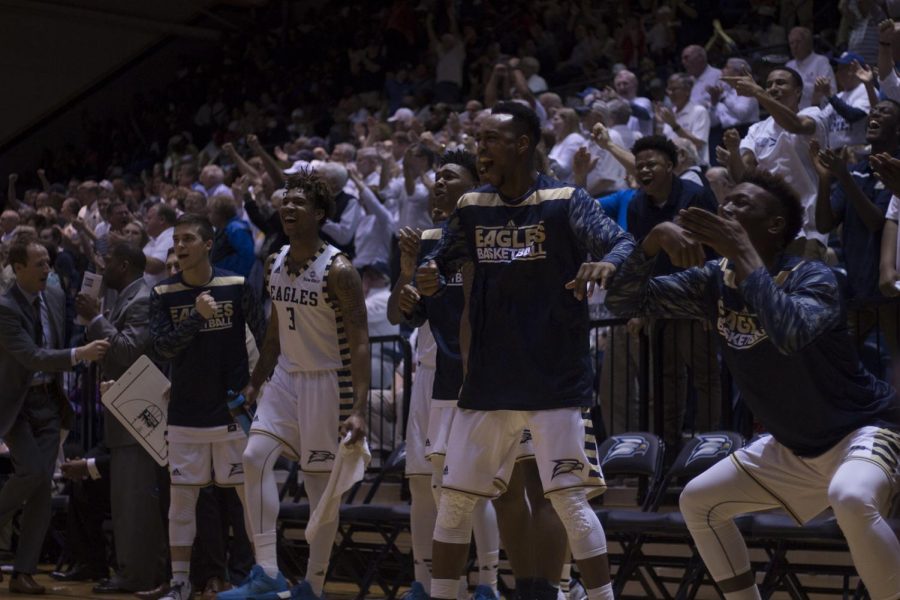 The battle for the title “The Real GSU” ended with Georgia Southern defeating Georgia State at home 54-52. Hanner Fieldhouse was electric Tuesday night as the game came down to the wire, something that isn’t uncommon when these rivals meet.

The Eagles started off the game with a burst of energy that led them to a 33-27 lead. The first half was capped off with a SportsCenter Top 10 play by Mike Hughes, who hit a 30-foot buzzer beater that perfectly sunk in the basket.

“[Coach Byington] told me to find the ball and find an open spot on the floor. I didn’t find the ball, the ball found me so I just tried to make a play and it went in,” Hughes said about the shot.

The Panthers held the Eagles close all throughout the second half and at times had the Eagles fans second guessing the outcome of the game. Hope was then revived when Ike Smith hit a 3-pointer to tie the game at 50.

“Lately I’ve been in a shooting slump, but coach just tells me to keep shooting with confidence and shoot when I’m open and that one just happened to fall in,” Smith said.

The Panthers had the ball with with 1:22 left on the clock, trailing 53-50. Ga State forward T.J. Shipes received a pass in the post and went up for an open dunk, however, Eagle center Coye Simmons rejected the attempt. The Eagles extended their lead to 54-52 and got a stop on defense to seal the win.

After the game, Byington expressed the importance of the win and how much it meant to his team and fans of Eagles Nation.

“What a great environment,” Byington said. “It was a special environment for our guys to play basketball in and to see the students and fans get behind our guys tonight. I don’t see us winning without them.”

With the win, the Eagles remain in fifth place in the Sun Belt with an overall record of 13-14 and a 9-8 record in the conference. They have three more games left before they start the conference tournament. If they win out they can go as high up as second in the Sun Belt, provided a few teams ahead of them drop a couple of games.

They host Appalachian State tonight at 7:30 p.m. in the final home game of the season.