Becoming Bites: How the popular Statesboro restaurant came to be 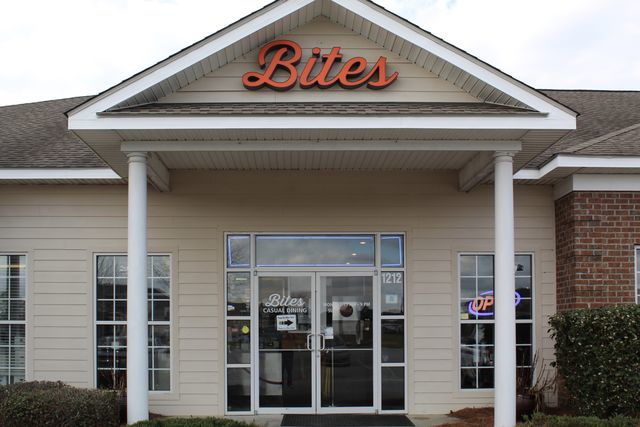 Bites on Brampton is a Statesboro restaurant that sells burgers, tacos, wings and other casual entrees. The restaurant opened in 2015.

STATESBORO — I arrived at Bites on Brampton, simply known as Bites to most Georgia Southern University students and Statesboro residents, on a sunny Wednesday morning in March. While the door was open and inviting, the restaurant wouldn’t begin serving for another hour.

Bites employees and servers begin to trickle in one by one, wiping off tables and preparing the meat that will be used to produce some of Bites’s most famous burgers. Although some employees are just now starting to arrive, Bites owner Ramy Masry has been there since seven. Masry, a business-savvy GS alumnus, works alongside his employees, also helping prepare the meat and special house sauces and ranch. Masry, who spends five to six hours a day at Bites, is very hands-on and involved in the quality and success of the restaurant.

“I think the secret is to be on top of your business,” Masry said.

From Jerusalem to Georgia

Masry, who is originally from Jerusalem, moved to Statesboro, Georgia in 1995 to study at GS with his brother through the international program at their school. Before traveling to Statesboro, a town that Masry couldn’t even find on a map, he had never been to the United States. He had studied American culture through movies, music and other resources, but still was not sure what to expect when arriving in the small college town.

Coming from Jerusalem to Statesboro was a cultural shock for Masry, as it would be for anyone entering the United States for the first time. While Masry would not describe his transition from Israel to the states as horrible, it was definitely challenging. But he embraced the challenge, saying it’s something he liked about his move.

Getting Down to Business

Starting out in hotel and restaurant management, Masry later took on several different jobs, including a position at one of Statesboro’s most popular restaurants, El Sombrero.

After graduating from GS, Masry and his brother decided to stay in Statesboro and open their own online wholesale company involving hookahs. Their reasoning for staying in the small town was that they believed it would be a good place to start their first business.

Luckily, the brothers were correct.

Their business began to take off, and they began shipping products internationally. Living in a small town, and working mostly online, Masry and his brother had everything they needed in regards to running a successful business. But in the height of the business’s success, Masry decided to leave in order to keep a healthy relationship with his brother outside of their work. Knowing the complications of mixing business with family, Masry decided to step away from the business before he and his brother’s relationship became sour.

“The bad thing is that working with family can get kind of crazy,” Masry said. “So I decided to go my own way to save the relationship.”

Even today, Masry tries to keep his work life separate from his home life.

Before opening Bites, Masry and his wife opened up their own retail smoke shop just a few doors down from what would later become the local burger restaurant. Like the wholesale business he had started with his brother, Masry’s smoke shop, A Smokin’ Place, was also a success.

Aside from he and his wife’s shop, the only other businesses in the complex at the time was the printing company, and another burger restaurant called Big Show. After learning of Big Show’s closing, Masry decided to take over, with plans of opening his own restaurant.

Opening Bites would give the couple the appropriate amount of space, as Masry would run the restaurant while his wife took care of A Smokin’ Place. Masry knows that working with family can be tough, so they made the decision to work separately.

But two years later, something happened that would lead to the temporary closing of the popular restaurant. In the middle of a busy lunch shift, banker walked into Bites, demanding to speak to Masry. Trying to help his employees cook and fill orders, Masry suggested the banker come back at a later time. The banker was not too pleased with his response, Masry said.

“If you don’t talk to me, I will shut your business down,” the banker said. He left his card and walked out of the crowded restaurant. Something was definitely wrong.

Masry and his wife soon found out that the previous owner of Bites’s location had loaned a bunch of money and never paid it back. Unable to reach the previous owner, the bank then went to Masry, because he was now the owner. The bank then informed Masry that he would either have to pay back the previous owner’s $16,000 dollar loan, or they would take all of the equipment in the restaurant because it was purchased with their money, Masry said.

After failing to negotiate with the bank in terms of payment,the equipment was taken. Left with no equipment, Bites had no choice but to close their doors.

“You learn a lot of stuff the hard way,” Masry said.

After hearing about Bites’s misfortune, students and community members alike became upset by the restaurant’s sudden closing. In an effort to help Masry purchase new equipment for Bites, a GoFundMe was created.

The online fundraiser made $4,000 dollars. With the money donated, Masry was able to buy all new equipment for less than what the bank was asking for. Bites was closed for less than four weeks before reopening thanks to the support of its loyal customers.

Starting a business could be considered a very risky endeavor. When opening a business in a small town, it can either be a major success, or completely vanish in just a few months. Over the years, Statesboro has seen many small businesses come and go, but Bites is still standing. Since opening back up, the restaurant’s success continues to beat Masry’s expectations. Every year, Bites exceeds its goals in terms of sales.

“We’ve been very fortunate enough every year where we’ve been beating our goal from the year before,” Masry said.

Even with major success, Masry has no plans of expanding the business anytime soon.

Surrounding areas such as Pooler, Metter and Savannah have all expressed interest in Bites, Masry said. While Masry is appreciative of the support, he only wants to focus on the one Statesboro location for the time being.

Masry does not want to take on any other locations because he knows that he would not be able to give his all to another location, which is important to him in running a business.

After visiting Bites that Wednesday morning, I could tell that Masry and his staff were like a family. While working diligently to have the restaurant ready by 11 a.m., the staff were in great spirits as they greeted one another with a smile and discussed what needed to be done for the day.

Walker Paul Tedders, a GS graduate currently working on his master’s, currently runs the social media for Bites. Tedders, who had limited experience, is appreciative of Masry, who gave him a chance.

“[Masry and I] just kind of connected, and I told him what I could do,” Tedders said. “I didn’t have much experience to begin with, but he gave me a chance.”

Bites has also impacted GS student Madison Buford. With Bites being her first job in the food service industry, Buford has a newfound respect for the business.

“I think it’s just made me be more patient with everyone,” Buford said.

The impact Masry and Bites has on the employees has to do with how Masry treats his employees, and how past experiences prepared him to run his own business, and to be the best manager possible to his staff.

“I’ve had some crappy jobs, but I’ve learned from them. And I think that’s what made me a better manager,” Masry said. “You don’t scream, you don’t yell. You treat them like family.”