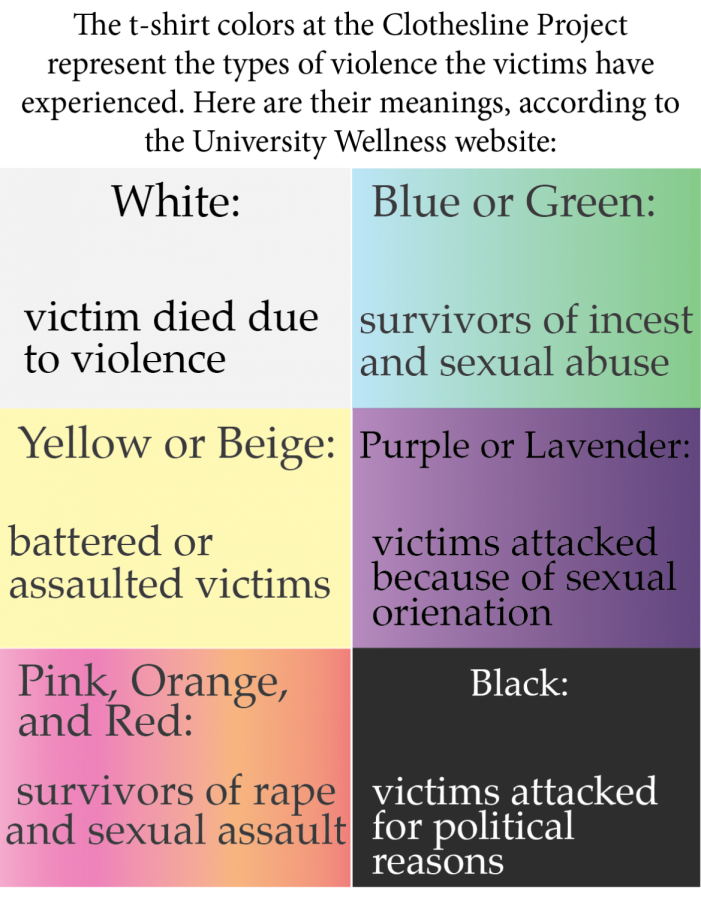 Sexual Assault Awareness Week begins with the Clothesline Project, a national movement that honors and supports victims of violence and sexual assault, and concludes with the “Take Back the Night” march and the “End the Violence” rally on Thursday, March 3.

“One of the highest times of risk for sexual assault for students is during Spring Break, so we made the decision at Georgia Southern to have our awareness campaign before the students went on Spring Break,” Caldwell said.

Carmen Gray, senior English major and president of SASE, emphasized the importance of speaking openly about sex and sexual assault.

Caldwell feels it’s time to talk about sexual assault cases, so that nobody is afraid to step in and prevent it.

“Our goal in raising awareness is to hopefully reduce instances of sexual violence, and also to reduce the stigma attached to those who have experience sexual violence, and to increase people’s empathy and skills for being good bystanders, for stepping in when they do see dangerous situations,” Caldwell said.

According to Suzanne Shurling, a graduate assistant for SART and certified victim’s advocate, the Clothesline Project will be located at the RAC and the Russell Union rotunda. Victims of sexual violence may share their stories by writing or drawing on T-shirts, which will be hung on a clothesline.

“[The Clothesline Project is] an effort to not only get the story out there so students know that this is an issue, but also to show students who maybe haven’t spoken to anybody about their assault yet that they’re not alone, that there are supporters on campus,” Shurling said.

Shurling said there will be a counselor present at the Clothesline Project table throughout the event, for those who may be triggered by the stories presented on the clotheslines.

Thursday’s “Take Back the Night” march begins at 7 p.m. and will take place at the bookstore plaza. Both victims and supporters of victims are welcome to attend.

“[We march because] we should not be afraid to walk alone after dark, so we’re bringing attention to that issue,” Shurling said.

Immediately following the “Take Back the Night” march, the final event, the “End the Violence” rally, will take place at 8 p.m. The rally will include candlelight vigil featuring an open mic where victims may share their stories, according to Shurling.

“I’ve been doing [Sexual Assault Awareness Week] on this campus for [sixteen years],” Caldwell said. “Every year, we’ve had at least one victim decide, on their own, to come up and share their story. And many times, they’ve never told anybody. They’ll say that they haven’t told their best friend, they haven’t told their mom and dad, or their clergy member. Those can all be very empowering efforts for the victim to feel like they’re starting to regain some sense of control.”

While later events, such as the Walk a Mile in Her Shoes event on March 31, are meant to educate the public on sexual assault, Sexual Assault Awareness Week also serves to support and empower victims.

“All of the initiatives that we engage in are efforts to help empower the victim, to assist their healing process,” Caldwell said. “The clothesline project gives them a platform to have a voice where they may not have felt safe having a voice before. The Take Back the Night March is a visible sign of community support for those who have experienced that kind of victimization. The rally to end sexual violence gives victims an opportunity to publicly share their experience.”