‘I didn’t even have to think about it’: Mekhia Freeman will return for a fifth softball season 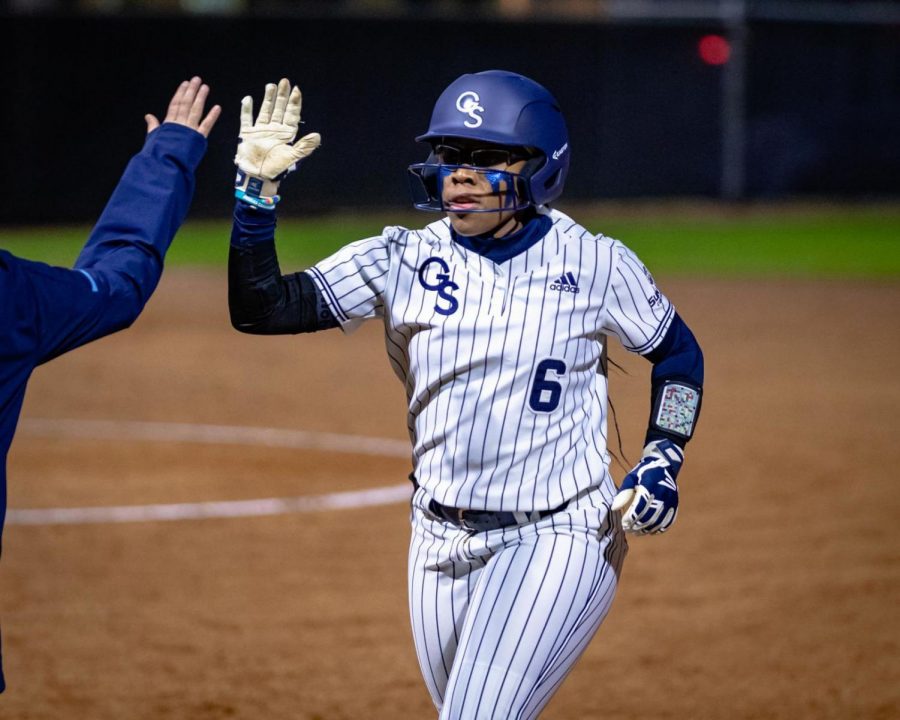 Mekhia Freeman is the first senior on the Georgia Southern softball team to announce that they will use their extra year of eligibility. She was leading the conference in batting average when the season ended.

“Before the decision even came out I knew I would say yes,” she said. “I didn’t even have to think about it…Just knowing that I didn’t get to finish my year, no senior wants a season like this.”

Mekhia Freeman was leading the Georgia Southern softball team when her season came to an abrupt end. She had 29 hits, five home runs and 60 putouts.

On March 12, the team was packing up to head to Alabama for a weekend conference series against Troy. The bags were packed and they were ready to go. They were sitting at a 2-1 conference record and had the lowest ERA in the country, an impressive stat thanks to freshman pitcher Aaliyah Garcia.

The coaching staff called the team into the office for a ‘quick meeting’ before they got on the bus and Freeman immediately knew something was wrong. She says the energy in the room was somber, which is the opposite of how things usually are.

The Sun Belt contacted coaches before a general announcement was made online to inform them that their softball season was over due to Coronavirus outbreak concerns.

That Thursday was very back-and-forth for the conference. That same day, they made the basketball conference tournament without any fans, then canceled the tournament altogether.

The team was upset and Freeman admits that she was unsettled that they wouldn’t get the chance to prove what they worked hard on all offseason. The Newnan native led the conference in total bases, batting average and runs scored. She was having the best season of her career and was only getting better.

On March 30, the NCAA granted an extra year of eligibility to spring sport athletes and it was a huge relief for Freeman.

“I was a little bit sad at first that it was up in the air if we were able to come back,” Freeman said. “Now, everything’s kind of fallen in place.”

In May, Freeman will graduate with a degree in Finance. Though she was already planning to return to GS next season as a graduate assistant while she pursues her master’s degree in Public Administration, she wanted to finish on her own terms. Now, she will still continue to play as a graduate.

She is obviously discouraged that she won’t be able to walk across the stage in May, but knows it is for the best. She’s not sure whether she will walk at the later announced postponed graduation date or in December, but walking is definitely a priority to her.

“It’s like all your hard work is going to go unnoticed,” Freeman said. “The people at Southern are trying their best to work with us…I’m on board for whatever they decide to do.”

As someone who has played softball for almost her entire life, having time off during this time of year is very odd to Freeman, this is usually the nitty gritty period of conference play.

She took about three weeks off to return home and get adjusted to her online classes, but has now started to get back to hitting in the best way she can with the amount of restrictions set in place due to COVID-19.

“Our resources are limited but Coach gave us in-home workouts and stuff that we can do…to better ourselves right now,” she said.

During this time, Freeman wants to keep herself in shape, physically and mentally. Since things happened so fast, she didn’t really have time to think when she was sent home. Now, she is starting to see the light. She wants to stay as positive as she can…especially towards her teammates.

“I keep telling myself that I get another year so I have to make it count,” Freeman said. “I’m excited because my dad didn’t get to come see me play my senior year yet…I have to keep working hard and it’s all going to pay off in the end.”

When her dad does show up to Beautiful Eagle Field, her game plan is to have fun and be a good teammate, as usual.

Undoubtedly, next session will be an adjustment for Freeman. There will be a full roster and she will have to be a leader now more than ever. She has stayed in contact with all of her teammates and will continue to push them.

“Right now, I just told them to keep working like we’re about to play a game,” she said. “You don’t want to take any days off because next year there’s going to be a lot of us and everybody’s got to be prepared… we have to keep the same mentality.”