A year to remember 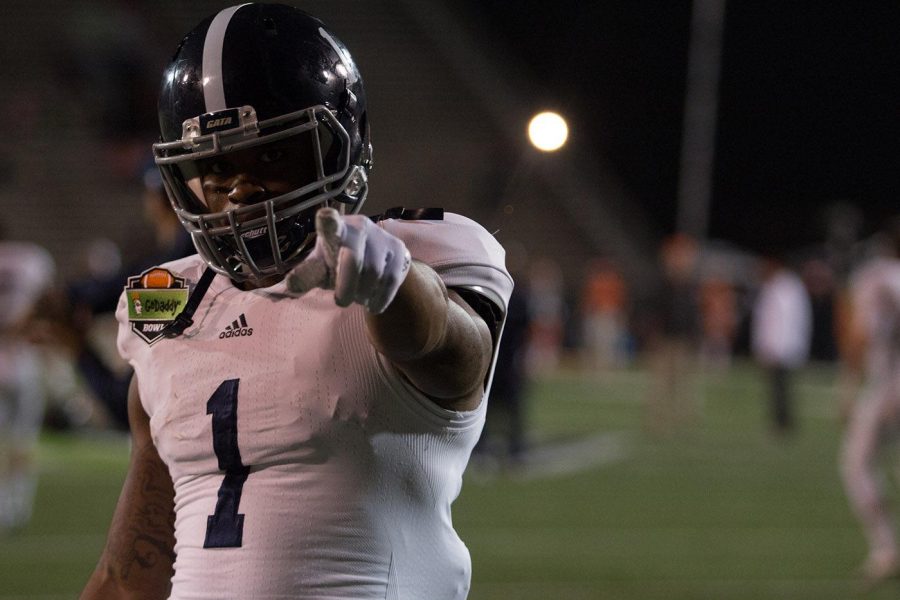 Classes have begun and everyone is getting back into the swing of college life. We all have something that gives us an escape from the daily grind and if your escape is Eagle football then look no further for your review of one of the best years in the history of the program.

The 13-game journey certainly had its ups and downs, and it was kicked off with a low that had some Eagle fans nervous for the second season in the FBS. Coming off of a Sun Belt championship, expectations were high when the team rolled into Morgantown, West Virginia. The Mountaineers pulled off a 44-0 shutout of Georgia Southern who was missing suspended quarterback Kevin Ellison. It was the perfect storm of circumstances that could break some teams, but they lived to fight another week.

After the loss, the Eagles experienced a five game winning streak to right the ship. Their most notable win came over MAC opponent Western Michigan and a 51-31 victory over UL Monroe, a team who gave the Eagles trouble in the final game last season. In the five wins the Eagles outscored their opponents by a total of 135 points and led the country with their lethal rushing attack.

The Eagles hit a road bump in the middle of their schedule as they faced conference opponent and longtime rival Appalachian State. Beating the Mountaineers is never an easy task, but beating them in North Carolina is about as difficult as it gets. After getting off to a great early drive, the Eagles weren’t able to keep up as App State grabbed a 31-13 victory. The loss was the first in the Sun Belt for our heroes and they needed to rebound again.

Victories over Texas State and Troy eased the plan. The Eagles were able to easily put away both opponents, outscoring them 82-23. With a 7-2 record and blood in the water, the Eagles were on the move to play their biggest game of the season against in-state rival, the University of Georgia. The game ended up being one of the most exciting contests of the year as Favian Upshaw stepped in and gave a stunning performance along with a huge special team’s play that pushed the Bulldogs into overtime. Even though they couldn’t come away with a win, they showed that the nation needed to start paying attention to the little team from Statesboro.

The final two games of the season included another Sun Belt beat down of South Alabama and a loss to Georgia State. That loss may have upset fans and was seen as an embarrassing mark on the schedule, but the up and coming Panthers are a forced to be reckoned with as they continue to grow as a program. With the regular season out of the way, the Eagles were selected to play in the GoDaddy Bowl for their first ever bowl appearance.

It was one of the most exciting times to be an Eagle, as the True Blue faithful traveled to Mobile, Alabama or tuned into ESPN to watch their team take on the MAC Champions, Bowling Green. Falcon supporters felt cheated that they should have to play the third ranked Sun Belt team, and that the game would be a cake walk. The game proved to show off the power of the new Sun Belt team as the Eagles set a conference record for most points scored in a bowl game after the 58-27 beat down.

The season was filled with ups and downs, heroic performances and broken records. Moving forward, we have a new coaching staff, a more experienced team and an exciting new schedule and opportunity to take home another conference title and the second straight bowl victory. As we grind through the spring semester and offseason, keep an eye on The George-Anne for updates on recruiting and new additions to the coaching staff.