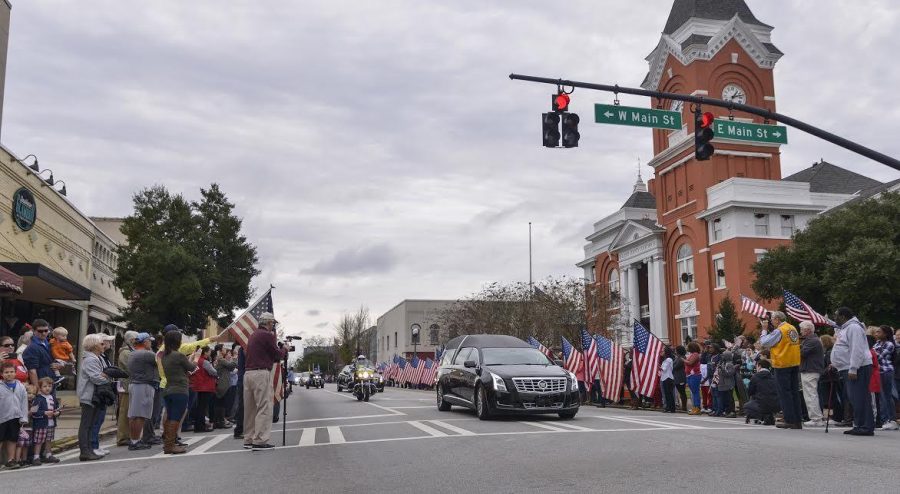 Flags across Statesboro were held at half-mast in late December to honor the loss of a local hero.

Airman Chester McBride III, a former Statesboro High School football player, was recently killed in a suicide bombing on December 21 in Afghanistan. McBride was among six airmen killed in the attack, the deadliest attack in four months.

The attack occurred just 2 months after McBride returned to Statesboro High School to give an inspirational speech to the football team, encouraging players to trust the people who have authority over you because they have your best interest at heart.

“As I saw firsthand during my visit to Afghanistan last Friday, our troops are working diligently alongside our Afghan partners to build a brighter future for the Afghan people,” Secretary of Defense Ash Carter said in a press release on December 21. “Our deepest sympathies go out to the families of these brave Americans who died in service to this vital mission.”

McBride was brought home to Statesboro on New Year’s Day and was honored by hundreds lining the streets for a memorial parade.

His funeral was held on Saturday, Jan, 2 at the Georgia Southern Hanner Field House.

Thousands of people, residents of Statesboro and elsewhere, gathered to support the McBride’s family at the funeral.

“Statesboro isn’t just a city. We are a close knit community with a lot of love to share and this love was very prevalent during the homecoming services for Chester McBride,” Rebecca Hooker, Statesboro resident and former classmate of McBride, said.

Among the many in attendance were four class officers from the Statesboro High School Class of 2003—McBride’s graduating class—and a class representative that was especially close to McBride.

Attendees of the funeral reminisced on McBride’s life and the impact he had on the community.

“Chester was a friend to all; he was a stranger to no one,” Hooker said. “We will always remember how he could light up any room with his sense of humor and vibrant smile.”

According to Hooker, the Statesboro High Class of 2003 is working on putting together a scholarship fund to honor McBride’s memory.