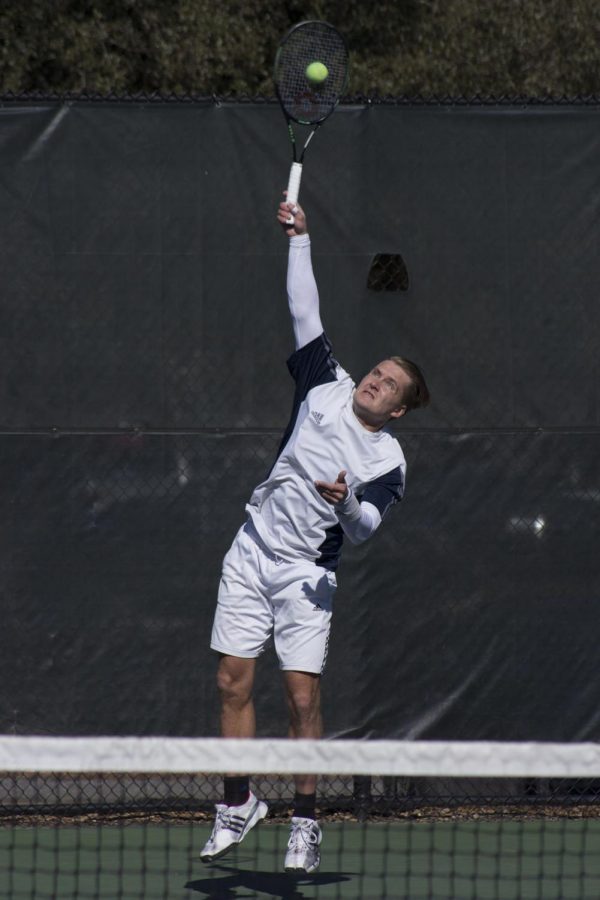 At this point last season, men’s tennis was 0-2. This time around, the role is reversed. The team finds themselves ahead after wins over Davidson and Gardner-Webb. Senior Rise Lanne is a team captain, he plays at the number one position player for singles and he also plays on the number one team for doubles. After making the Sun Belt All-Conference Singles First Team last season, he is back to help lead the team through a strong spring season.

Of the 12 singles matches during the past weekend, the Eagles recorded eight victories. The accountability of success can be from the Eagles executing well, being better conditioned or being more experienced. There are many reasons for their individual wins. But Lanne has seen this play out before and he knows how the Eagles should be handling it.

“I think compared to other seasons, we started a little easier. It’s building the confidence for everyone,” Lanne said. “Last year, we had a tough Georgia Tech. People got losses. Then after that one, we had a tough match right after. It’s easier to build on [our success] when we win the first two matches. When you win, it’s easier to win again. When you lose, you realize how tough it is to win again. It’s all about the confidence.”

Head Coach Sander Koning is to credit for setting up the schedule this season.

The team will take part in 23 matches this spring before competing in the Sun Belt Championship during April. They will be playing a majority of their matches in North Carolina and South Carolina with 10 matches lined up at home.

The starting lineup for the Eagles was consistent through the weekend. It was Lanne, sophomore J.C. Alcala and sophomore Eddie Landin at the helm. Following them was junior Nico de Groof, redshirt junior Daniel Casablancas and freshman Andre Johnson. Junior Christian Kerrigan paired with Lanne in doubles and he is considered one of the leaders of the team on that side of the court.

It was only a handful of players that did not find an early win that past weekend. With how the sport operates, and with the amount of experience Rice has had playing tennis, he knows how the team should be judging themselves now.

“In tennis, I can tell myself that I’m good. If I win, it’s easy to win again,” Lanne said. “You know how it is. You get used to the routines and the patterns you do well. You start executing those. When you lose, you start to think of the small details. For everyone, it’s important you get wins because you get the feeling of winning. They get the feeling of what they’re doing well and what they’re not doing well. You need to get the confidence. That’s the biggest thing right now.”

For the Eagles, even if the entire team plays singles well, doubles can still decide the match. The scoring for college tennis matches is first to four points, meaning that doubles can be the deciding factor in a lot of situations.

Southern got the opportunity to show off their doubles formula with wins over Davidson and Gardner-Webb. Doubles ended up being the reason for their victory over Davidson that Saturday.

The team sometimes looks for different answers to doubles when things start being inconsistent. Lanne got an opportunity to explain his thoughts on how the team should operate in doubles this season.

“You get the chemistry going,” Lanne said. “You know where the other guy is going, what he loves to do. When you play with someone else, you might not know his favorite serve or his favorite move; what he wants to do. If I play with the same guy, I start to realize what he knows best and I can support that. With these couples we have now, it’s balanced that one guy is better at the net and the other guy is better at the baseline. It’s credit to coach for figuring out what guys play well together. I hope that we can remain with the same guys because, in the long term, that’s the best option. If you have to change a lot, like with last year, you have to change things because your partner wants to do something differently and so on.”

There’s always so much to consider for the upcoming tennis season regarding the team’s physical conditioning, their ability to play in different environments and what level of competition their opponents will be playing at this year. No matter what, however, Southern will always get to take credit for their two win start this season.

They will be put to the test against better competition this weekend of Jan. 29 as they face East Carolina and Winthrop in Greenville, NC. The Eagles will be ready for the challenge and ready to prove themselves as a better team for this 2016 season.