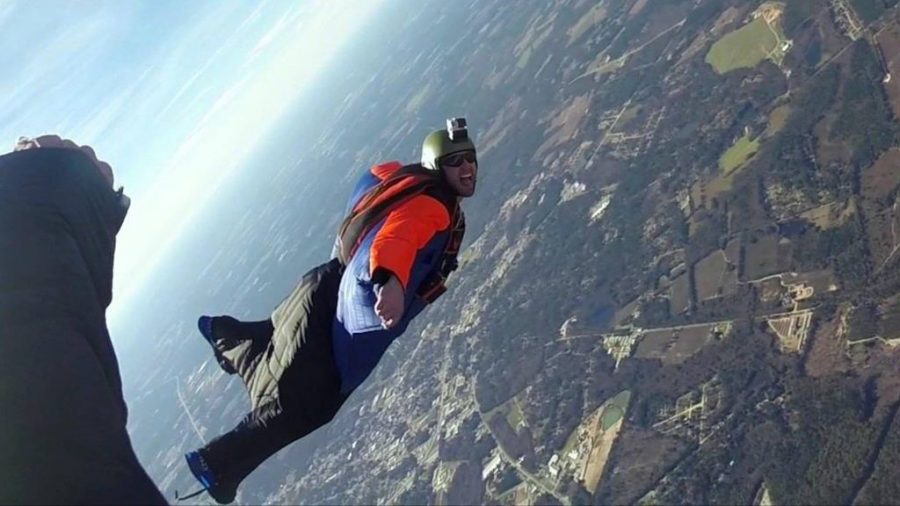 Elwood: “So, what would you say to a newbie? Why should they do this? Why –”

Kloess: “Why should you jump out of a perfectly good airplane? Well, the door is open… just try it once.”

The wind sounds like constant thunder. It rushes past, when tiny being’s like humans plummet towards the earth’s surface at 120 mph. The smell, the sound, the view — these things you take in as quickly as possible before it’s too late. Seconds feel like milliseconds. Never has there been such a better view of the world.

“Most of the population are not going to tell you they want to jump out of an airplane, and a smaller percentage are actually going to jump out of airplanes…There is a risk to benefit ratio. I clearly, believe the benefit exceeds the risk,” Cathy Kloess, owner of The Jumping Place, said.

A morning starts every day in a life, but it’s what you choose to do in those mornings that can change your life.

Wake up. Shower. Eat breakfast. Get in the car.

That morning’s destination was different. It was The Jumping Place in Statesboro, one of the four skydiving jump zones in Georgia.

The morning sun crept from the treelined horizon. A few small airplanes sat waiting near hangars for their morning flight. Two were white with touches of red, green and blue along the bodies. The words “SKYDIVE” painted across each of them in large blue script.

Sit down. Watch a video. Sign life away. Zip up jumpsuit.

With each step, the anxious gut-feeling grew.

“Initially I didn’t [want to skydive] and was kind of coerced by a couple friends, they convinced me to go out and go skydiving one day. That was summer of 2007 and it’s been pretty much every single week since then, ”Austin Davis, diving instructor, said.

The plane was smaller than it looked. Two divers, their diving instructors, a cameraman and the pilot himself made it as if the plane were actually a flying sardine can. The propellers began to loudly grumble as they spun, preparing for flight. It began speeding down the runway and suddenly lifted off the ground, shooting straight into the air.

The cabin was filled with the engine’s grumbles. Below, Statesboro began to look like a patchwork quilt as the small arrow on the altimeter crept towards 11,000 feet. The drop zone.

About 10 minutes went by. The pilot gave a thumbs up. Simple d-clips were snapped together, harnesses were tightened and goggles were put on.

“I’ve always wanted to do it [skydive], always… I thought ‘well, why not do something crazy with your life rather than nothing at all’…The first time was scary, when that door opens, it gets scary. After that, when you jump, everything is just amazing,” Colin Van Antwerp, diver, junior mechanical engineering major, said.

The door opened, wind roared past the plane. The diving instructor scooted towards the edge of the door. The wind was so strong it turned human legs into those of a rag-doll’s.

Cross arms around chest. Place heels on the metal bar…

“My favorite part is exiting the airplane, you get that freeness knowing that nothing else in the world matters. It’s just you and space,” Logan Hall, diving instructor, said.

Suddenly it was like jumping into a bottomless pool with no water. There was no gut drop, no moment of sheer terror, no thought of dying. There was only space. Miles of fresh, bright blue, beautiful space.

It felt as if the surface of the earth was moving up, not that you were falling down.

The dive instructor pulled the parachute. With a strong jerk, everything was silent except for a ringing in your ears. The parachute flapped in the wind as it glided through the atmosphere.

Finally, feet met the ground with a smooth landing. The parachute deflated onto the grass and it was over. Never had the world seemed so large, yet so small. Never had the sky seemed so blue. Never will you feel so alive.