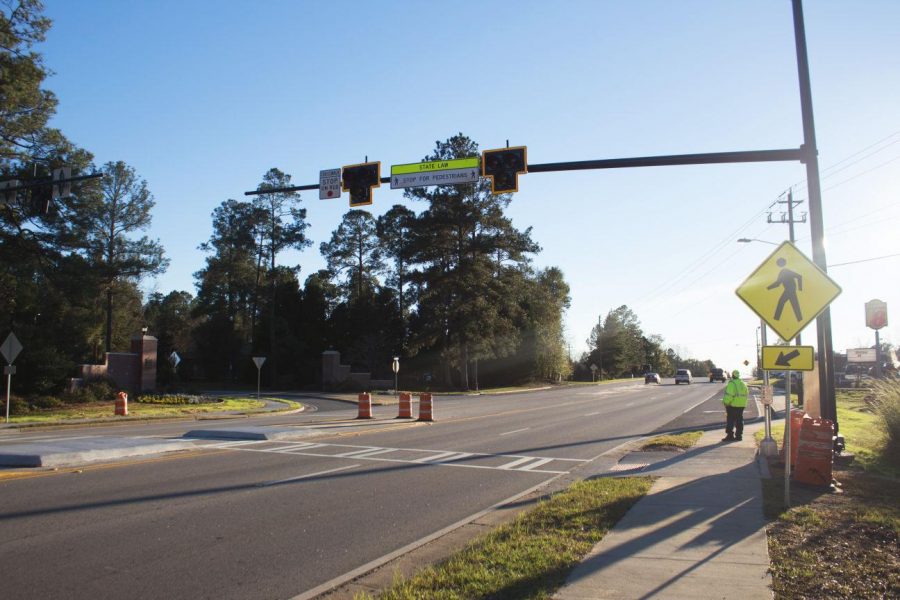 The new traffic light is located just before where Parrish Street leads out of campus into South Main when coming from downtown Statesboro.

This is not a regular stop light, it is a H.A.W.K. light which stands for High-intensity Activated Cross Walk. The light is activated when a pedestrian presses a button the same as at a regular cross walk.

This is now the only H.A.W.K. light in the immediate area and it will take some getting use to.

According to a press release from the Georgia Department of Transportation District Engineer, Karon Ivery is quoted as saying, “Although the H.A.W.K. Signal is very similar to the pedestrian’s view of a normal traffic signal, the motorist view will be quite different so, we urge drivers to use extreme caution until they become more familiar with this type of signal.”

The project was a collaborative effort between the City of Statesboro, Georgia DOT, and Georgia Southern University. After noticing the amount of pedestrian traffic across South Main in this location the City of Statesboro hired a consultant to do a traffic study. The city was advised to consider the H.A.W.K. signal to remedy the problem.

South Main is a state route so Statesboro had to make the Georgia Department of Transportation, Georgia DOT, aware of the problem.With the route being their jurisdiction, Georgia DOT funded the project.

“Once we recognized there was a problem we talked to Georgia Southern a little bit and the university agreed to help by constructing a sidewalk from Forrest Drive to the location of the signal… then Georgia DOT, of course 301 or South Main is a State Route so whatever we did we had to work with Georgia DOT… they fast tracked the project, ” Brad Deal, Statesboro City Engineer, stated.