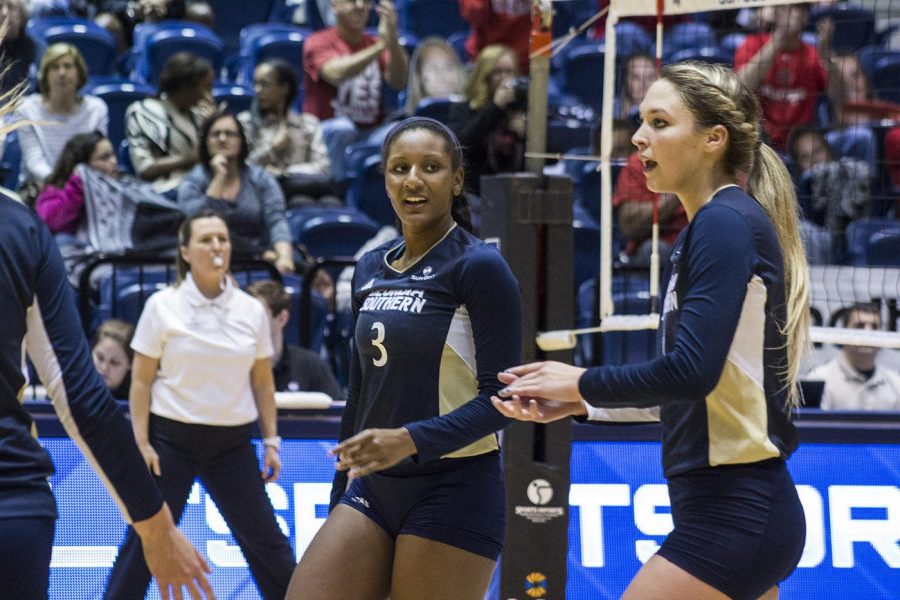 The dream fell short on Friday, Nov. 20 when women’s volleyball competed against Arkansas State in the first round of the Sun Belt Championship. In a deceptively close 0-3 match with the score going 20-25, 22-25, 24-26, the Eagles almost earned the necessary points to overtake the Red Wolves. Things didn’t completely fall through and Georgia Southern ends the year on a 10-19 season.

“Obviously disappointed,” said Head Coach Dustin Wood. “A lot of [the Eagles] came out with some fire. They competed really hard against a really good team. I knew they were good, but I felt that we were just as good.”

The first set looked like a lost match for the Eagles when the team fell down 4-12. Arkansas State seemed to be a team set on easily claiming the Sun Belt Championship. When the misplays started coming out, the momentum changed greatly. Redshirt-junior Katie Bange didn’t immediately adjust to her playstyle for the night, but once she started to get into the flow of the game, she earned 31 assists and upset the Red Wolves’ tempo with her 6 kills.

“[Arkansas State] won the bigger points tonight,” said Wood. “That was the difference. Our passing broke down. Our outsides didn’t get the job done. On the bright spot, Katie had a great game plan. She executed well. Chevalier had a great night. We knew we could score out there.”

Redshirt-sophomore Megan Chevalier, the right side hitter, led the Eagles with 13 kills on the night. Freshman Lauren Reichard also played well with 10 kills. Sophomore Cathrine Murray was behind them with 8 kills.

With that match being the final one of the season, the three seniors of Southern are now finished with their collegiate careers. Seniors Kat Minnerly, Crysten Curry and Bernetta Moore have finished their last season as an Eagle volleyball player at Southern.

“That’s always a coach’s toughest talk when it ends the season,” said Wood. “I was more concerned about the seniors. The somberness wasn’t about them. Their heads were in the right places, and they were thinking about the right people, especially those three.”

Freshman Joscelin Morrow stepped in as a replacement for one of the players during the second set. She keyed in on a dig that earned the Eagles tempo for a time in the set. Southern ended up not taking the set, but Morrow played up to par, especially in the most important mch atof the season for the team.

“It was a good atmosphere,” said Wood. “They competed hard. It was very competitive. I wish I would’ve seen them more earlier in the season. But I’m proud of the way they came out. Most kids execute, but some didn’t. Next man in and next one did a good job.”

Arkansas State would go on to win the Sun Belt Championship by defeating App State 3-2. The Red Wolves will be playing in the NCAA tournament. They will hear their bracket matchup on Sunday, Nov. 29.