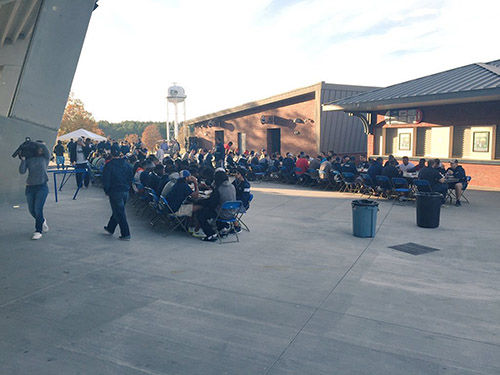 Georgia Southern University publicly announced its acceptance into the GoDaddy Bowl during a cookout at Paulson Stadium on Sunday. The game will be on Dec. 23 in Mobile, Ala. at Ladd-Peebles Stadium at the University of South Alabama. The Eagles will play against the Falcons of Bowling Green from Bowling Green,Ohio. The Falcons are part of the MAC Conference and won the MAC Championship on Dec. 4.

First to address the media was Coach Fritz. He seemed confident that this was a great bowl selection for the Eagles.

“I’ve talked to a few people who have played in the bowl,” Fritz said. “They say it’s a great bowl. We’re just fortunate to be the first team in Georgia Southern history to play in a bowl game. We’re looking forward to having a bunch of our fans there and getting involved in the bowl situation.”

Georgia Southern Athletic Director Tom Kleinlein was happy with the bowl and proud of the team for the achievement.

“We had a conversation about mid-morning,” Kleinlein said. “The Sun Belt Conference notified me that the GoDaddy Bowl had selected us to participate in their bowl game. We anxiously awaited the opponent and eventually found that out at the day went on. Obviously glad for our football team and for our university.”

Kleinlein went on to comment about the ways in which fans can make it to the game.

“We have Statesboro bus trips and Atlanta bus trips to get them right home after the game to get them home Christmas Eve in the morning.”

One of the players most excited about going is safety Matt Dobson. The senior was recently selected as a First-Team Academic All-American for the second consecutive year.

“It’s very special. I’ve been through a lot since I’ve been here,” Dobson said. “My freshman year was our last season in the FCS Playoffs, couldn’t go our sophomore year, then last year winning the Sun Belt but not being able to go to a bowl game and this year being back in post-season play is huge for our seniors.”

Dobson realizes the legitimate competition in the Bowling Green Falcons and knows it’ll be a tough game.

“I watched them a little bit on Friday night,” Dobson said. “They were playing in the Conference Championship Game against Northern Illinois. They’re fast-paced. Their quarterback is an unbelievable player. He’s thrown for 4,700 or 4,800 yards. I think he’s leading the country. They’ve got some really great receivers. It’ll be a huge challenge for us. We’re excited about it.”

Linebacker Ironhead Gallon is also ready for the challenge. The redshirt junior has emerged as one of the leading playmakers on the defense.

“We love a challenge on defense,” Gallon said. “We’re ready. We’re very excited. With this time period we have as a team, we’re going to get everything settled.”

“We’re just very anxious,” Ellison said. “Our brand of football wasn’t the brand we played last night. We’re going to bounce back from that and play the game we know how to play.”

The cookout was ended by coaches and players conversing on what’s to come with finals weekend how they can start preparing for the Falcons of Bowling Green.The team will have a few weeks to prepare for the game on Wednesday, Dec. 23. Kickoff will be at 7pm Central.