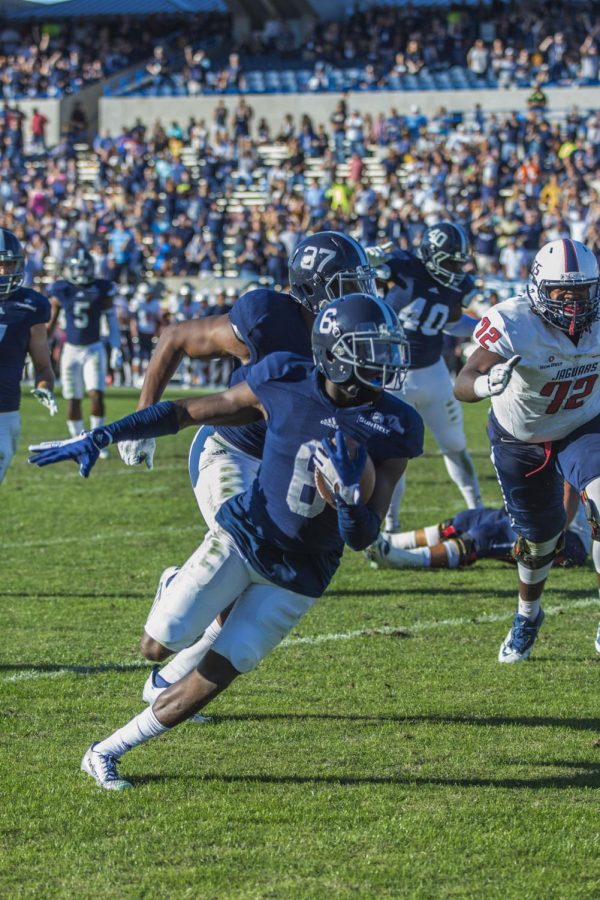 Thanksgiving is a time we all get to head home and enjoy the company of our family and friends while sharing food, stories, and of course, watching football. If you didn’t get a chance to keep up with the Eagles while you were away, we are here to update you on what you missed.

Many probably witnessed the Eagles go toe-to-toe with the University of Georgia. After controlling most of the game the Eagles were bested in overtime by the Bulldogs. While they didn’t pull off the win, the team showed again that they had the ability to take on an SEC opponent and if a few more plays went their way, they would have been able to take home the victory. The loss would end up being made up for this weekend, but before we get there, there is a rumor that should be put to bed.

Last week, there were reports that Eagle head coach Willie Fritz had expressed interest and was in talks with Iowa State regarding their vacant coaching position. In his two years at Georgia Southern, Fritz has won 16 games with only six losses, had the best rushing offense in the country, and most importantly the first bowl eligible team in Georgia Southern’s history. He certainly will go down as one of the best coaches the Eagles have seen, and he won’t be leaving just yet. Iowa State announced over the weekend that they hired Toledo Head coach Matt Campbell. Fritz spent his weekend leading the Eagles to a huge win over the South Alabama Jaguars.

Having a game during fall break typically leads to lower attendance, and the game against South Alabama was no different. The Eagles played in front of a crowd of 15,000 which is around 9,000 less than a usual home game. Despite this, the team put on quite the performance. Eagle quarterback Kevin Ellison had three total touchdowns, with one through the air to Derrick Keaton and two on the ground. Matt Breida ran free for 187 yards and two touchdowns on 21 carries which included a huge 75 yard touchdown run. L.A Ramsby has his typical dominant performance with 13 carries for 85 yards and a score. The Eagles ended up taking the game 55-17 with another 500 yard performance from the offense and an amazing defensive onslaught that held back one of the top offensive programs in the conference.

There are a few other interesting things going on with the Georgia Southern program that merits mention. First off, it has been announced that Paulson Stadium is officially converting to artificial turf and the sod is being sold by the athletic department. Also, Eagle assistant head coach Dell McGee has been nominated for the Broyles Award, which is given to the top assistant coach in college football. McGee was recently promoted from his position as running back coach where he has crafted an elite stable of running backs. Finally, Eagle tailback Matt Breida is five yards away from the milestone of achieving 1,500 rushing yards, and only 18 yards from reaching 3,000 career rushing yards mark.

Moving forward, the Eagles have a rare opportunity in the world of FBS football: the opportunity to become a 10 win team. They currently have eight wins with games coming up against Georgia State and the inevitable bowl game that awaits. However, we shouldn’t sell the in-state competition short as they travel to Statesboro this Saturday. The Panthers have picked up five wins this season and with the FBS not having enough six win bowl teams, a win for Georgia State would almost certainly guarantee a bowl appearance, their first in five years in the FBS. The Eagles will need to handedly put down the Panthers and move on to their first ever bowl appearance.