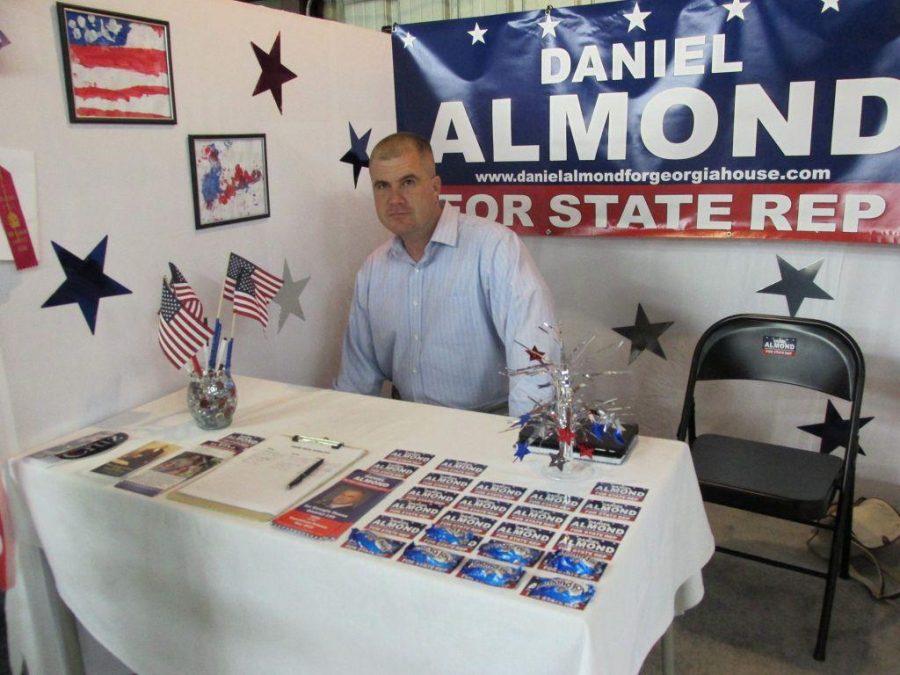 Daniel Almond is a 36 year-old Effingham county resident, running for Georgia State Representative, District 159 in the Republican Primary in May. This district includes the counties of Effingham and Screven as well as a portion of Bulloch county and Statesboro.

Almond believes in reducing the size and scope of government influence, increasing transparency when it comes to lawmaking, and the protection of the second amendment, as well the reformation of several aspects of the criminal justice system, including mandatory minimum sentencing, no-knock warrant, and the legalization of marijuana.

He is challenging the current Representative and House Majority Leader Jon Burns for the nomination. Burns has never been challenged before, but Almond feels the people should have a choice in who they vote for, and feels that Burns has not been active enough in reducing government influence.

A combat veteran, Almond served in the Marine Corps for 8 years, with 3 tours in the Iraq war, where he participated in the Second Battle of Fallujah. He sat down to talk with the George Anne about his experiences as a combat veteran, as well as what he hopes to accomplish in this election.

Tell us a little about yourself.

“I was raised in Atlanta Georgia, actually born in Louisiana. I joined the Marine Corps at age 20 in 1999. I met my wife, a Georgia Southern alum, while I was on leave between my second and third Iraq tour. We kept in touch with each other as well as we could during that last tour. I got out in April of 2007, and we got married later that same year. We started having kids in 2009, and now we have 3, with a fourth on the way. I’ve been really busy with this campaign. I’ve got a full time job, I’m not a professional politician so I’ve had to this on the side. It’s a lot of hard work, but I enjoy it.”

Why did you choose to join the Marines?

“I joined the Marine Corp over other services because it looked like the most challenge and the most opportunity to improve myself and to have a purpose. Ronald Reagan said that some people live their whole lives wondering if they made a difference. Marines don’t have to ask that question.”

What did you do during your first enlistment?

“I was a radio operator, serving aboard the USS Gunston Hall. I had a hard time, and as the first year went by, I was thinking ‘no way am I reenlisting, this isn’t for me, and I’m definitely not going to make a career out of this.’ By late summer of 2001, if someone had offered me a million dollars on a second enlistment I still wouldn’t have reenlisted.”

What changed your mind?

“September 11th. I watched the towers fall and the attacks unfold aboard the USS Gunston Hall, and I said no way, I’ve got to get in the fight.”

“Yes. I was a radio operator in my first enlistment, and in my second enlistment I was a counter intelligence and human intelligence specialist. I went into training to do that, and while most of what I did remains classified, I will say that it stayed with me. My first tour in Iraq, I got to participate in the Fallujah battle called Operation Vigilant Resolve. It changed my life a lot, experiencing combat, and it taught me to treat each day as a blessing and as an opportunity and never to take anything for granted…to be grateful for my time on earth and to try and make the most use and do the most good with my time that I’ve got left. After that I did two more six month tours…that was a difficult time, it wasn’t easy but I did what I had to.”

What did you do after leaving the military?

“Since getting out of the military, I’ve worked as a real estate agent, I used the post 911 GI bill to go to culinary school, and worked as a cook here and there. I worked as a corrections officer at the Effingham County Prison for about 3 years. I currently work in Savannah as a security guard, but during that time, I’ve also been an activist.”

“In 2009, 2010, when you had the Democrats pushing through Obamacare purely on party lines, and in violation, in my opinion, of what the Constitution says, a lot of people were angry at the time and what I did is I organized a rally with the message “Restore our Constitution”. And this rally got national attention because we carried rifles and pistols as close to DC as we could get. We were right across the Potomac River from DC, and the media covered it a lot, and to that degree it was a success. It also gave me the opportunity to meet a lot of other very dedicated people to causes like this. So yeah I’ve been an activist.”

Why did you decide to get involved in politics?

“The system that I learned about in Social Studies class, you’re supposed to have an independent executive, legislative and judicial branches of government, and supposed to be coequal and independent. Well that system has gone out the window at the state level, partly I think because of the fact that not a whole lot of people pay attention to it…really, it’s the state house that’s going to have more of an effect on your life. If you get arrested for something, it’s more likely than not that it’s going to be somebody enforcing a state law than a federal law.”

“I’ve looked at state politics too, and I see a lot of cronyism and corruption, and I want to take that same fighting spirit that I had in the Marine Corps to the capital and stand up to all that. I felt compelled to be a voice for restoring the system of limited government and checks and balances that our country and our state is supposed to have, as well as representing the people. The people need a voice, and the people need a voice that’s going to be louder than those other interests and influences that are up there.”

Why are you in favor of ending no-knock warrants? Having served in Iraq, wouldn’t you sympathize with the effectiveness of surprise raids?

“When I was over in Iraq, part of my job would be to talk to local informants and find out where the bad guys were. And one of the rules, one of the principles we would follow is, we would not go and arrest somebody or hit a house, raid a house, search a house, unless we had multiple source reporting. We’d get the information about where the bad guy lives, we’d go arrest him, and we’d search his house. Did we kick in the doors? No. Did we throw a flash-bang in? No. Did we hit him with the element of surprise and break windows and all that? No. We knocked on the door and waited for somebody to answer, so there wouldn’t be confusion so as to avoid collateral damage.

We didn’t want to anger the local population, we wanted them on our side, and it doesn’t take a rocket scientist to figure out the parallels behind what I just said and the drug war today. You’ve got right now, you’ve got a lot of hostility out toward the police, and I think eliminating no knock warrants would go a long way to reducing some of that hostility. If the police here are operating under more aggressive rules of engagement than I was operating with Marine infantry squads, something’s wrong.”

You’ve said you support marijuana legalization. Do you see a problem with running on the Republican ballot, considering most Republicans are against legalization?

“I’m not worried about that, there are Republicans who have that position. Me personally, I don’t think it’s in anybody’s interest to be putting people in jail just for having a plant. Also, if the Republicans, as you just said, are perceived that way, they’re going to lose votes as time progresses. If they get painted as the party of marijuana prohibition, it’s not going to be good for them.

How did you start up your campaign?

“I kind of jumped right in, went down to the Capitol, and I talked to some people that I knew that had run for office before, and got some advice from them, found out the steps that I needed to take. I’ve gone door to door, trying to be as aggressive online as I can, with Facebook and Twitter, and a campaign website. And I’ve got some good volunteers, but I could use more. I’ve had to get started early, because given who my opponent is, I’m going to get outspent moneywise very quickly.”

“These kind of reforms that I’m talking about, they’re not going to happen unless more people, and especially young people get involved. A lot of people say ‘I’m not into politics’, well, politics is into you. You have no choice. You’re in the game. You can decide to not have a voice and get taken advantage of and used by the system, or you can work within the system to fight back.”