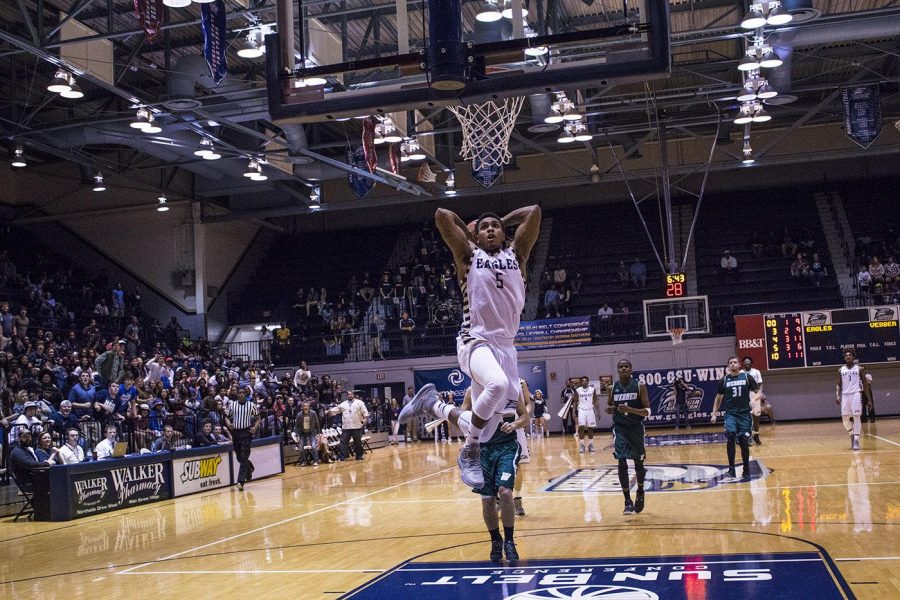 The Georgia Southern Eagles cruised past Webber International 116-49 on Friday night behind Jason Burnell’s game-high 19 points. Burnell came firing off the bench and sank four shots from behind the arc. “They believed in me and had confidence in me that when I get the ball they know that I am going to make a play,” freshman forward Jason Burnell said. The Georgia Southern bench outscored Webber’s bench 73-18. Sam Auguste led Webber International with 10 points.

Six players for Georgia Southern scored in double-digits in the game. Sophomore forward Coye Simmons finished the game with a double-double tallying 10 points and 11 rebounds. The Eagles cleaned up their rebounding as a team against Webber International after being out-rebounded in their exhibition game against Middle Georgia. Georgia Southern jumped out to an early 21-3 lead behind freshman guards Tookie Brown and Ike Smith. They established the tempo early in the game and never looked back. The 116 points scored by Georgia Southern was their biggest scoring output in nearly nine years. “27 assists is great.

Georgia Southern was able to force 26 turnovers and held Webber International to 26% from the field. The Eagles shot 49.4% and never trailed throughout the entire game, and they didn’t allow Webber to get closer than 25 points in the second half.

“What we will eventually have is experienced leaders down the road, but right now we got new leaders,” Head Coach Mark Byington said. For the freshman, it was only their second game playing together and they are already showing team chemistry. “We just play hard. We are inexperienced and we know that, but we just try and get better every day and learn every day,” freshman guard Ike Smith said.

The Eagles will have a quick turnaround when they travel to take on Ole Miss this Monday. It is the first of two-game set against the SEC, as they will face Auburn on Friday. “I’m sure it will be a great learning experience,” Byington said. “It’s a big challenge, but these guys like playing basketball and like playing in different places, so they’ll be ready to play.”

The Eagles kick-off the four game road trip this Monday at Ole Miss. Tipoff is at 8pm.