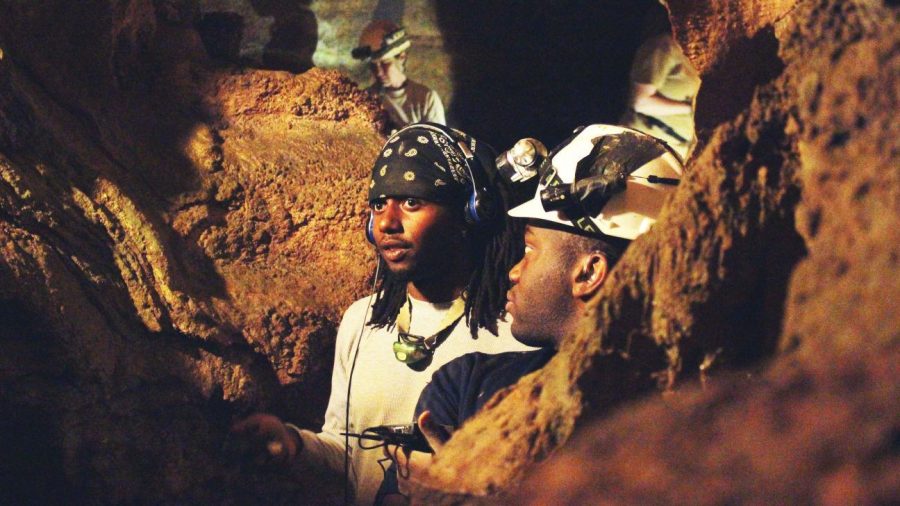 Rion Goons and Alex Betts prepare for their next scene.

Picture this: a young female graduate student joins forces with a rival Australian treasure hunter to find her estranged sister and save her best friend. It might sound cliche, but Relics of the Madre Vena, an action/adventure film directed, written, and produced by Georgia Southern’s own Professor Jason Knowles with the help of many Georgia Southern students, is far from ordinary.

“[GSU students are] going to see work that was done by their peers.” Professor Knowles said. “A lot of the film students have done a lot of the camera work, sound work, lighting; they even planned a lot of the shots. And there’s the editing and the visual effects, all done by students.”

Relics of the Madre Vena tells the story of graduate student Maggie Keller, whose academic advisor sabotages her dissertation on lost Viking colonies in America in an effort to get her expelled from the university. When a government agent offers to help Maggie prove her research if she solves a cryptic clue to an Ozark treasure mystery, Maggie and her gay best friend, Simon, agree to a joint expedition.

However, once Maggie and Simon discover a mysterious Viking connection to the legend, the government agent turns against Maggie and kidnaps Simon. Maggie teams up with a rival Australian treasure hunter in a shaky alliance. They race through ghost towns, wild caves, lost cemeteries, and urban undergrounds to solve cryptic clues and stop the true source of the mystery from falling into the wrong hands.

“I’m kinda hoping they’re going to walk in expecting to see an action-adventure, kind of like Indiana Jones,” he said. “There are a lot of twists and I think they’re going to be surprised, especially with some of the personal things that the characters go through.”

Professor Knowles likes to write his scripts with strong female leads, and this film is no different.

“I’ve always wanted to do a modern day female Indiana Jones character. I like to write my scripts with strong female leads.”

He wanted to choose a local setting for the film, because Indiana Jones is always somewhere exotic. He decided on the Ozarks, a mountainous region of Arkansas.

“Nobody’s done a national adventure in the Ozarks. And they have plenty of treasure legends there. So I just thought, ‘Yeah. Why not set it there?’”

Professor Knowles admits the cast and crew of the film had some difficulties throughout filming and post-production.

“The worst [problem] was not getting the work study position filled,” he said. Whoever would have filled this position would have been responsible for coordinating food, locations, and scheduling. “One of our other issues has been editing,” he added. “It’s not easy work.” Only three students, along with Professor Knowles and two lab assistants, have worked on post-production.

Despite those problems, Professor Knowles says he can’t single out any students that went above and beyond, because they were all wonderful.

“We only had 8 people in the class–it was a long term summer class–and two volunteers. I had 10 people doing the job of about 70 to 75 people,” he said. “I warned them this is the very first time we’ve ever tried this here and it’s never going to go smooth on the first try.”

For the premiere, Professor Knowles plans to screen the film to a test audience at Georgia Southern in November before officially premiering Relics of the Madre Vena at the Bentonville, Arkansas Film Festival.

“The rough cut we’ll screen for a test audience, hopefully on Nov. 18,” he said. “We would like to get an audience together to watch it and then split them up into groups and do surveys, Q&As, things like that. Based on that, that will determine how we do our fine cuts.”

Professor Knowles has been heavily invested in Relics of the Madre Vena for quite some time. “I’ve done seven years of research on the treasure legend,” he said. He also stars in the film as one of the main characters.

You can find more information and sneak peeks behind Relics of the Madre Vena on the film’s Facebook page: “Relics Of The Madre Vena.”