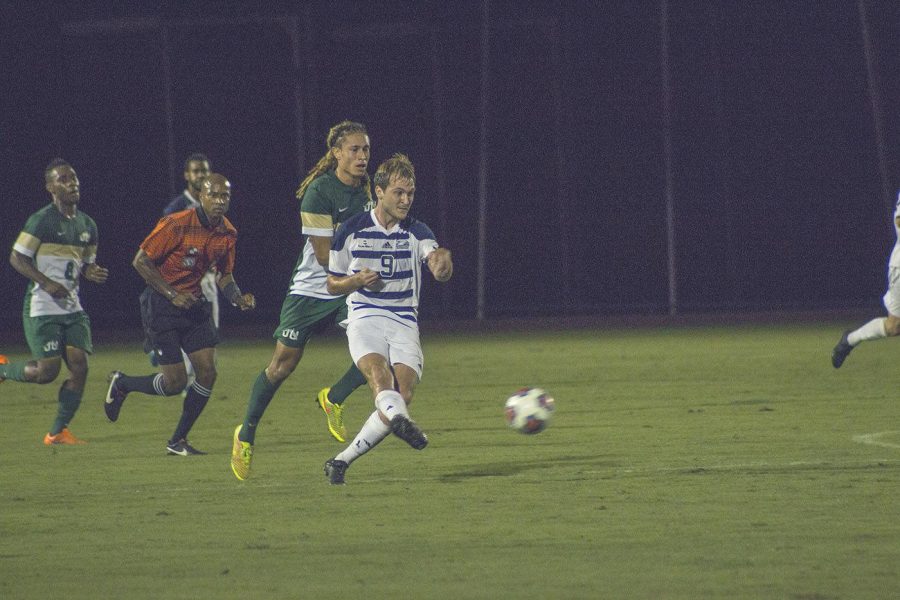 The Eagles came out fast and furious with a score in the fifth minute by Sophomore Hunter Loyden. The Eagles never let up and continued with strong defensive efforts at the beginning of the game. As the game started picking up physically in the first half, the Eagles started picking up the scoring with back-to-back goals in the 24th and 27th minute by Freshman Emil Larson and Senior Emmanuel Raji, giving the Eagles a 3-0 lead going into halftime. “We wanted to assert ourselves early and come out with an attacking mentality,” Coach Kevin Kennedy said about his teams’ strong first half performance. The crowd was elated as the game went into the half with them giving a huge round of applause as they jogged off the field.

As the second half started, Georgia Southern showed the same aggressiveness and energy they had at the beginning of the contest. The Eagles kept the pressure on and sealed the game when Alfonso Ochoa scored a goal in the 63rd minute after getting behind the defense and sneaking the ball in through a couple Jacksonville defenders. Even with a huge lead, the Eagles never lost focus. They continued with their stingy defense and came away with stop after stop. The final dagger came in the 71st minute when sophomore forward Adam Abdellaoui scored his first goal of the season off a wide-open kick from 35-yards out. As the game clock hit zero the Eagles celebrated their shutout against Jacksonville University.

This win was an important victory with it coming off the heels of a loss last Friday and being the first game at Erk Park since September 2. The strong and resilient effort showed by Georgia Southern throughout the entire game was inspiring. “The message at the half was number one don’t concede anything in the first 10 minutes of the game and then after that control the tempo,” Coach Kennedy said about his teams’ effort throughout the game.

Next up is a trip to Washington D.C. to play Howard University on Saturday. The Eagles hope to carry the momentum from this game over into their upcoming games. “To get a win at home before we go back into conference play on the weekend I’m really…really excited about,” Coach Kennedy said.