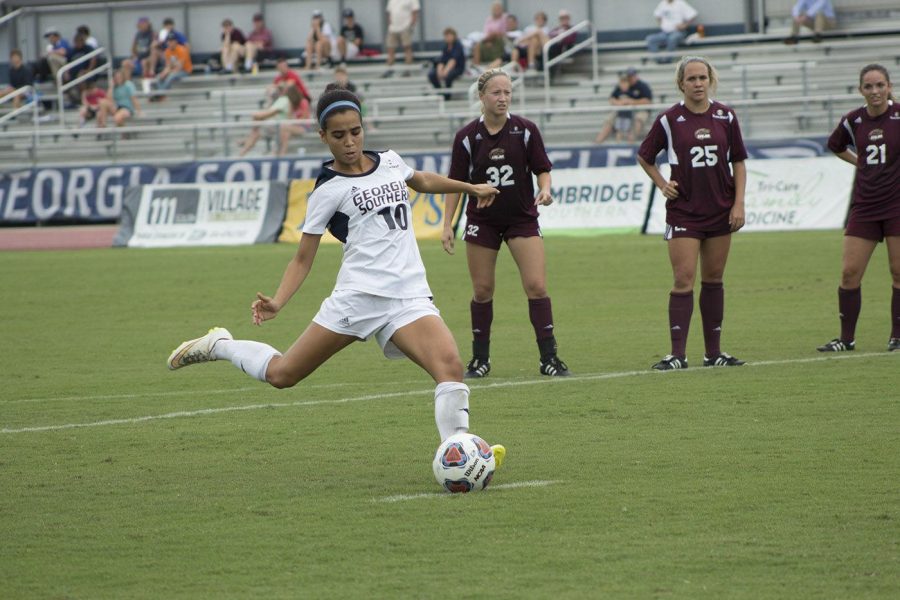 This season’s 2015 Sun Belt Women’s Soccer Championship is in Atlanta, Georgia starting on Nov. 3 and will conclude with the championship game on Nov. 8. For Georgia Southern senior forward Nora El-Shami, this year’s tournament is being held in her own backyard.

Currently leading the team in assists (12) and second on the team in goals (9), she looks to capture the Sun Belt Championship for the first time in her career just 30 miles out from where she won a state championship in high school.

El-Shami was born in Marietta, Georgia before moving to Alpharetta when she was in the seventh grade. Being born into a soccer family, she began to play when she was three years old. “My uncles played and my cousins played,” she said. “It was a sport that I was grown up into.”

When moving to Alpharetta, one of the reasons for the transition was to be closer to her club soccer team, Georgia Rush, which was coached by her uncle. From seventh grade to her senior year in high school, she was led under the guidance of her family members, who are deeply rooted in soccer.

With the practice and skill development playing club soccer, playing soccer at Milton High School elevated her to being a top star, resulting in earing rookie of the year in 2009, and taking Milton High to the 2012 State Championship, leading the team with 14 goals that season.

As high school was ending, she needed to make a decision on where she wanted to continue playing soccer on the collegiate level. Her top choices were narrowed down to Georgia Southern and Georgia State. “I knew I wanted to stay in state to be close to home and for in state tuition,” she said. “Lindsay Vanderspiegel (Georgia Southern Women’s Head Coach 2011-2012) was the one who recruited me. She was interested in me, and at the time, I did not know what I wanted to do.” Nevertheless, after visiting Georgia Southern, she said that she instantly fell in love with the university, the people, and the coaching staff.

Upon Aariving at Georgia Southern University, she instantly made an impact for the Eagles. In her freshman season she started every game and tallied five goals, three assists and scored the game winning penalty kick in the Southern Conference championship game. She finished the year as a conference champion, and was nominated to the SoCon Championship All-Tournament Team and All-Freshman Team.

“I came in with the mentality that I was going to give it my all,” she said. “It was competitive and more challenging, but I like that kind of stuff. The coaches were great, and the players around me were great.”

The accolades continued to pour in through the next two seasons as she was named All-SoCon Second Team in her sophomore year. She received All-Sun Belt First team honors her junior year, which was Georgia Southern’s first year in the Sun Belt Conference.

Now in her senior season, El-Shami is looking forward to retuning back to the Atlanta area where it all began in hopes that she can conclude her collegiate career with another conference championship.

The first step in the journey to Atlanta was taken care of when the Eagles defeated in-state conference rival and Sun Belt host school Georgia State University in a 4-3 thriller. El-Shami achieved her second hat trick of the season, including the game-winning penalty kick.

With four games left in the regular season before the tournament, her eyes are on the prize, and to finish back where it all began. El-Shami says that it will be great for her, the university, her senior teammates, and for her family.