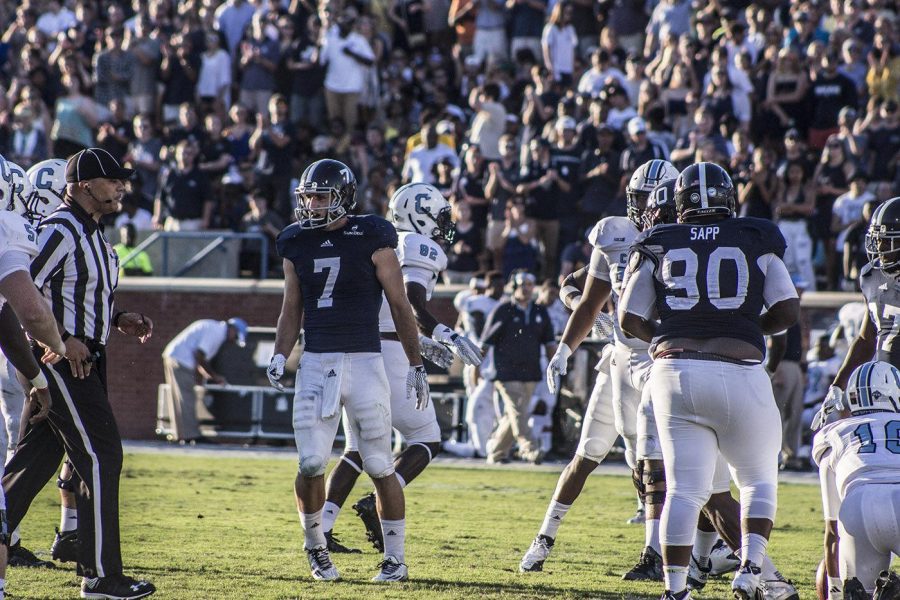 The Georgia Southern Eagles’ defense is playing intelligently with a relentless, “no-nonsense,” demeanor. The Eagles’ defense has recorded 10.5 sacks and 11 interceptions in five games making them the second in sacks and first in interceptions in the Sun Belt. The defensive coordinator running the show, Jack Curtis, is only in his second year as defensive coordinator.

What does Georgia Southern football mean to you?

Jack Curtis: It means winning traditions, outstanding fans and one of the elite programs in the country.

What is your motto for the defense?

If there was one NFL coach and player you would have come to practice, who would they be and why?

JC: In regards to a coach attending practice, I would enjoy having Bill Belichick because he’s one of the greatest to ever coach the game. It would be interesting to get his perspective after watching us practice.

In regards to a player attending practice, I would have JJ Wilcox come back and visit with us. He’s so well-respected here. He loves Georgia Southern. And the kids would love to listen to him and hear what he has to say about his career at Georgia Southern and his career now playing in the NFL for the Dallas Cowboys.

What’s it like being the defensive coordinator for the Eagles?

JC: It’s a privilege and an honor. Like I said, there are few programs similar to Georgia Southern, especially when it comes to winning traditions. There’s a lot of pressure to win that comes along with the job but that’s where you want to be. As a coach, you want to coach where the team and the fans expect to be. Georgia Southern is a fantastic place to be.

What impresses you most about the defense so far this season?

JC: The biggest thing that’s impressed me so far this season, we’re number three in the country when it comes to interceptions. We’re creating turnovers. The interceptions aren’t due solely to the secondary; the linemen and linebackers have had interceptions as well. A lot of credit is due to the defensive line. We’re making opponents make mistakes, creating turnovers, and giving the offense the ball; that’s helping us win.

The defense has racked up 10.5 sacks and 11 interceptions in five games, do you see any letting up?

JC: I hope not. I hope to pour it on the rest of the season. Sometimes you get on a roll with a team when it comes to turnovers, and with another team you can’t get one. I’m hoping this is contagious and we continue to rack those turnovers up.

There seems to be a rotation of many talented players on the defense, how do you manage the playing time?

JC: We don’t play favorites. We don’t play the players we don’t think we can with out there. We have a rotation of players to provide depth which allows for players to be refreshed. It’s different position by position but if there’s a guy who’s head and shoulders above another; he won’t come out of the game much. We’re provided with depth and we’re going to utilize that depth this season.

Do you have a favorite nickname for a player on the defense?

JC: The one that comes to mind and you would think is his real name is, Ironhead Gallon. I think the opponents know why they call him Ironhead. They’ve seen the hits he’s delivered this season. He’s a pleasure to coach.

Has there been a favorite game so far this season and what game are you most looking forward to this season?

JC: My favorite ‘game’ are the ones we’ve won. Every game you win is a lot of fun and you enjoy each and every single one of them. If there was one team we really had the pleasure of beating I would say, Western Michigan. We played well against those guys. It’s a nice opportunity to play out-of-conference opponents and when a team comes down from up North it’s fun to get after them.

You coached six first-team All-Americans and nine players who were selected in the NFL draft. More than a dozen of your former players signed with NFL teams, including several who are on current rosters. Do you think this defense has the capability to add to that list?

JC: I would think so. We’ve got a few guys this year who I think are more than capable of getting a look from NFL scouts. It’s certainly fortunate to have great players around. You try to teach them the game to the best of your abilities but it really comes down to talent in the NFL. I want to put our guys in the best position to learn the game and let their talents take over. I’ve been fortunate enough over my career to have a number of those guys; they’re a lot of fun to coach.