Freshman star shines on the court 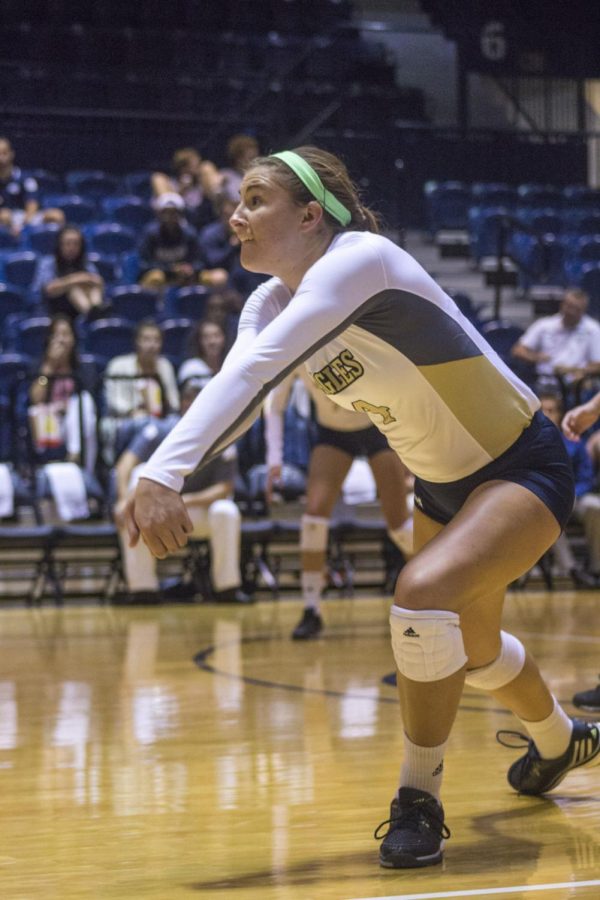 Freshman Stephanie Spencer from North Canton, OH is the starting outside hitter for the Georgia Southern Eagles volleyball team. She is leading in kills for the Eagles so far this season and has played in a major part in each of the team’s victories.

Spencer’s collegiate career began when she became part of the Eagles in summer.

“Georgia Southern fit a lot of the criteria that I was looking for in a school,” said Spencer. “And I loved the coaches; they were really approachable.”

As an Ohio native, Spencer found herself wanting to be part of the Deep South for some time. Southern was a place she wanted to be.

“When I was going through the recruiting process, I always wanted to go south. I don’t know why,” said Spencer. “I never really looked at any schools up north, or in Ohio. I kind of took them into consideration, but I always wanted to come south for some reason.”

“It’s just something I thought would be cool to have this as part of my life. My thing was like, ‘Ohio is always going to be home; I’m always going to be from the north. So why not branch out and experience different things while I have the opportunity to?'”

Adjusting to the south’s pace came pretty naturally. Only a thing or two really kept Spencer from acclimatizing right away.

“[The north’s] definitely different from down here,” said Spencer. “I wasn’t really expecting too much of a change. But, culture-wise, it’s different. It’s kind of cool to experience more north and then more of how people live in the south. It’s much hotter. Other than that, I like it. I think it’s cool.”

“Now that I refer to [the south] as my home, I’ve gotten two different perspectives of what home is.”

Spencer’s reason for coming to Southern was mainly for volleyball. Now that she is a starter for the team, her career experience has been a memorable one.

“You jump right into it. There’s no time to retrain” said Spencer. “You’re just playing from what you knew how to play and trying to incorporate what you know and bring it to this program; taking pieces and bits. It’s kind of cool to see it all come together.”

Other players on the team helped contribute to Spencer’s adjustment to the system and team’s playing style. They made it easier for her and the other freshmen to feel welcome on the team.

“Before I got here, I guess I would always talk to Alex Beecher and refer to her,” said Spencer. “I’ve always really looked up to her cause I know how good of an athlete she is. She’s awesome. But even before I started playing with her, she was really approachable, always willing to answer any questions I had, and would check in on me and make sure I was doing okay. That made it a lot more welcoming and easier to bond with the girls.”

That was something Head Coach Dustin Wood even mentioned in an interview earlier this season: the team’s communion and interactivity have been much better compared to last year.

“Even when we got here in the summer, and so far this season, we all get along so well. The older girls treat us, freshmen, like equals,” said Spencer.

“Everybody is so welcoming. I understand there has to be that level of respect, and I feel that we, as freshmen, respect the older girls a lot because they have a lot of knowledge and experience. Like we pointed out in practice: these girls know how to win championships. Like, Crysten, and Kat, and Alex; those are the oldest ones. But they know how to win.”

“You can’t really teach somebody [to win]; you just have to observe, pick up from what they do, and incorporate it in your play. So that’s inspiring.”

A few bumps in the road have led the team to a 5-10 record now. It isn’t the extent of the team’s ability, and Spencer knows the team has a lot more to give.

“I think preseason could’ve gone a little better,” said Spencer. “It was definitely a learning experience. We had our highs, and we had our lows. Conference play, so far, is a little shaky, but it’s still early. We still have room to improve. There’s no way we’re going to be stagnant for the rest of the season. I know we’re going to get better. We have a ton of room to improve, still. So that’s something to look forward to.”

“I think if we go into each game with the mentality of a clean slate, focus on this game and “we’re going to take this win”; we can build up a streak from there. It’s a good mentality going into this weekend.”

“In my eyes, we should be winners,” said Spencer. “I think a lot of us, our goal, is to make it to Sun Belt championship. No matter what team you play for, that should be your goal: to win and be successful. We definitely have it in us.”

“Going into these next matches, we have the ability to win a Sun Belt Championship and go into NCAAs. It’s definitely possible, and it’s one of my personal goals. And I know it’s a lot of the girls on the team’s too.”

There are 13 regular season matches left for the Eagles before the postseason begins. All of those matches will be Sun Belt conference play.

The Eagles will be in Texas on Thursday, competing against the 11-5 UT Arlington Mavericks.